Last year, when the carpetbaggers at Wizard World blew into town, I took to the streets to protest. Specifically, the streets that lead to the local comic shops in the area. I hit about eight places last year, and it was my goal to do better this time around. I donned my Star Lord jacket and headed out.

I started the day off meeting up with my friend Jennifer and her daughter Samantha at my home shop, Comics Are Go for my first stop. Eric had set up at Wizard World  (“consorting with the enemy” he told me) and then was heading to Columbus for a Harper show. That’s okay, Ed was manning the home front and chatted up Jennifer while Samantha and I dug through the discount trade bins. I grabbed a couple of avengers books entirely because they’ve got Ben Grimm in them while Jen found a Ghostbusters Annual to get. I waved goodbye to them and started to make my way towards the freeway. A couple stops before that though…..

Over to Keith’s to pick up some new Superman as I make my way to the freeway. I declined the bag for my comic books, so he sandwiched them between two old indie books with the covers ripped off to protect them from the weather! I always feel weird in here,  I used to work in the same corner building when it was a different business… I’m hoping to be back here around free comic book Day too!

Comics and More
831 Chestnut Commons Dr,
Elyria, OH 44035
The comic book side of strongsville hobby is my last stop before I hit the freeway – it’s on the edge of town and I always think of it more as a hobby shop then a comic shop… So I sometimes accidentally overlook it. I missed going here last year and was happy to correct that oversight this time around! There’s always a weird varity of things here, more trades than comics but more interesting toys and models and you’re finding your average comic shop as well! I’m heading to Parma next!

United States. A comic tour of Cleveland wouldn’t be complete without a stop out here…. kind of cool to see that the place is packed! 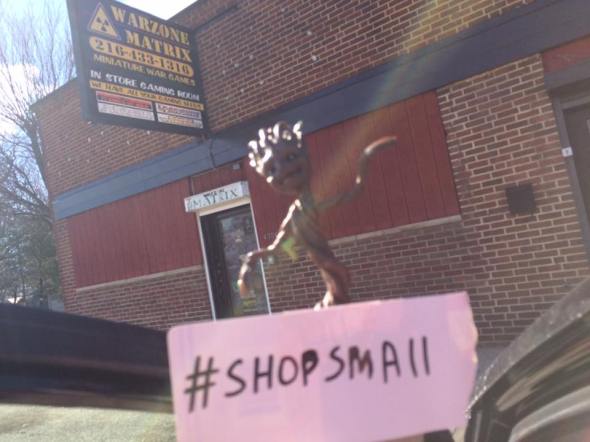 Taking the little side trip year, last year I went out of my way to stop at recess games… This year I thought I’d drop in at war zone again, it’s been awhile – are used to play hero clix here in my tournament days. It’s a small, cramped, dark maze of games and figurines stacked up on top of each other – the sort of hidden treasure trove that you could dig for ever in and always find something new.

People love the store – one of the guys in my comic book club has told me it’s his favorite shop – and it shows, considering the place was still full and busy on a comic con weekend. It actually makes me feel good to see how busy the shop then today – this ones an old school shop, cramped and dark – there is an old tube TV playing infomercials underneath the counter… And I can always count on them to have a long box full of beat up Silver age books for $.50 each

Right down the street is north coast nostalgia, who also usually has a nice selection of quarter bins full of interesting stuff – but this time around I found something really cool! The hologram figure of green Lantern… I remember this look from the rock of ages storyline in the early days of JLA. However, I’ve never seen one of these figures before – I didn’t even know they existed! 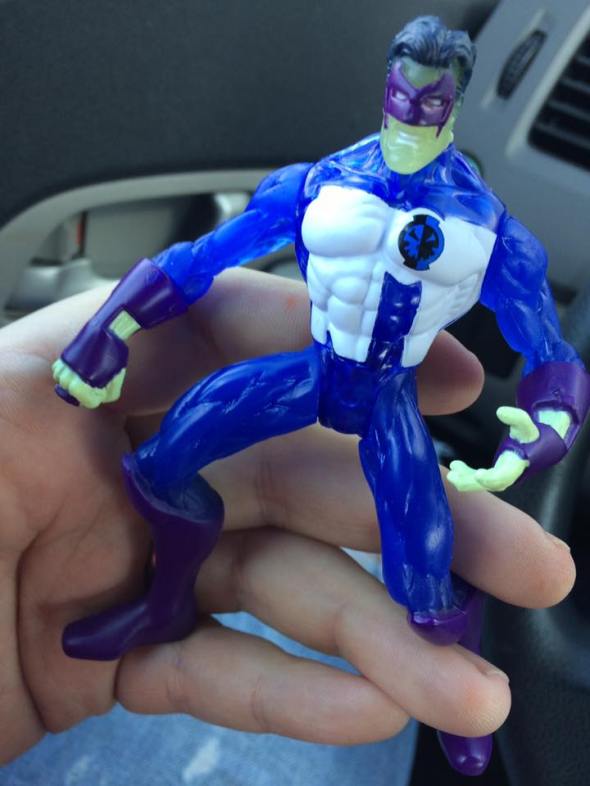 Still much heavier game emphasis at Ground Zero, but I Gotta admit I enjoy being greeted at the door by the gigantic Deadpool statue. Once again, the place was full of guys playing games and digging through boxes. I’m beginning to suspect that all the action this weekend just might NOT be at Wizard World….. 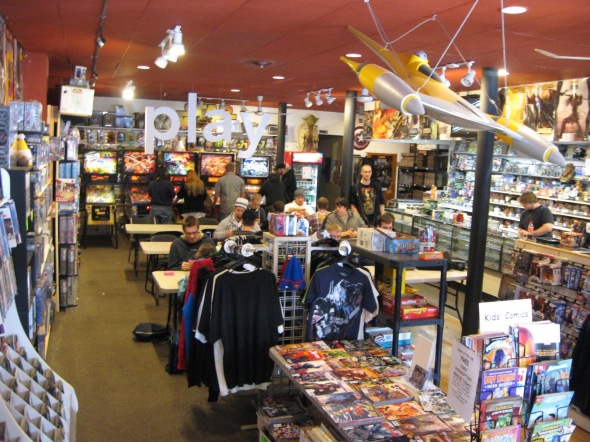 I genuinely don’t remember if I just forgot about kid force last year or if I had just run out of steam by that point… But I definitely wanted to check them out this time around. I know they’ve been in this location for a couple years now, but it’s not the one I remember – I’ve seen them in a couple of their previous locations in the past and I must admit I really like the new digs. In addition to being a big pop marketplace, and game retailer, there’s also rows of pinball machines here! It’s an interesting new direction to see your game shop go – really digging it!

I actually checked out imaginary worlds in Cleveland Heights back when they first opened, but the place is just so far out of the way for me that I haven’t been back much> They also have dollar bins as opposed to fifty cent or quarter bins, which is frequently too rich for my blood.  But oh holy crap…these actually may be the best dollar bins in Cleveland.  I pulled a Dark Shadows in there, noticing that there’s a surprising amount of beat up gold key in there. There’s a price break at 25 for $20 and I think I may just have to pop back after I get paid again. The owner told me he could fill out my Thing collection and I think I see all the issues of Camelot 3000 that I’m missing in there… 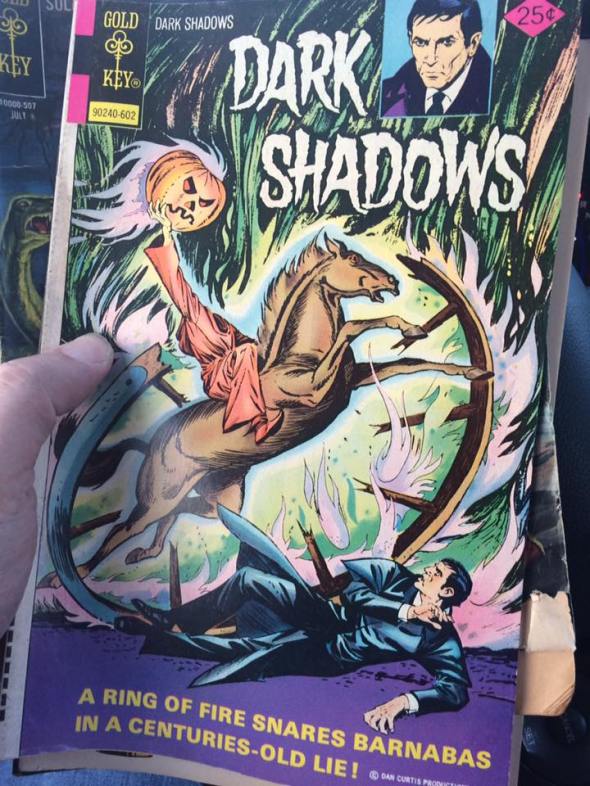 It’s tough to say goodbye to big fun – A more tearful farewell even then York comics last year. This vintage toy, novelty, in pop culture shop has been the linchpin of the Coventry road shopping experience for as long as I can remember. I’ve been coming out here for 20 years, and I’m happy to say that I never took it for granted, and visited as often as I could – always finding something amazing whether it was in the back, in the context of beans, or in the dozens of tiny card catalogue drawers Full of Oriental trading toys. I’m gonna miss you guys as they pack up and move along. 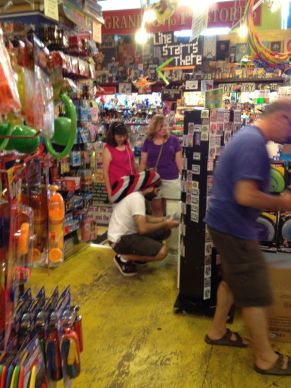 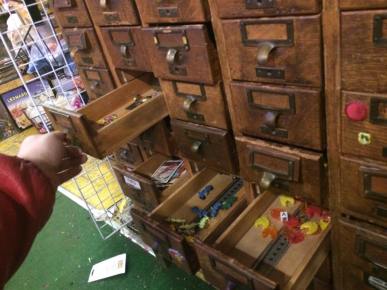 My tour this year lasted six and a half hours covering eleven locations and once again saying goodby to one. Next year I think I may just have to try something different….this tour takes a lot out of me. I’m exhausted….