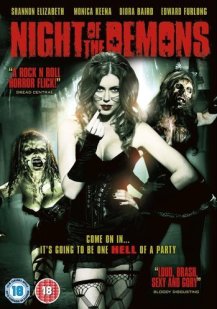 Occasionally when I hear people speak about night of the Demons 2009, it’s negative. More often though, they simply don’t speak about it at all. I think a lot of people weren’t even aware this came out… It’s almost as if the fan base didn’t get the memo and those who did responded with the sort of derision that has become typical in the current climate of remake fatigue.

For me, night of the Demons 2009 is actually a remake done right. It’snot slavishly devoted to the original, it takes the premise and then runs off its own direction. The villain is still very much the same, and the concept is completely recognizable – resurrected Demons in the local haunted house. Yet it manages to feel modern, with color filters when appropriate – green tones instead of the warm oranges of the 80s. With make ups that are just as horrific but grizzly in a new millennium sort of way.

We’ve got Angela hosting a party again – this one’s a little different as it’s a pay for play houseparty, with a little bit more attendance and debauchery involved. We’ve  got a scream queen inserted, this time around at Tiffany Shepis doing her best to act as young as the rest of the cast is. Even Linnea Quigley makes a cameo, showing some homage to the original.

The Demons are far more scarier here, perhaps a bit more aggressive in the kinetic filmmaking style of the 2000s.The film feels bloodier and grander in scope. There may be a reason for that.

inflation that’s close to 2.2 million dollars. Compare that to the ten million dollars that was poured into this remake and we can see just why this looks so much slicker than the original.

All in all, I like this… Much like Dawn of the Dead, and the Texas Chainsaw Massacre, it’s a remake that captures the spirit of the original but updated for a modern audience and takes full advantage of filmmaking technology that wasn’t available 20 years ago. I’m not certain that I really need a sequel to this remake, but I’m glad that this one exists and honestly I’m equally likely to grab this as I am the original – I feel quite equal appreciation for both.