I will readily admit that I can’t exactly call this the first film entirely though it’s one of Coscarellis earliest released works – it’s preceded by Jim the worlds greatest, but I’ve never got my hands on a copy of that one… This is a quintessential 70s film – and in a lot of ways it’s childhood in the 70s as viewed through the eyes of someone who was a child in the late 50s… There is still an idealized neighborhood, where everyone knows everyone else on the street and children all played together, building soapbox racers in planning their Halloween costumes… There’s always​ The younger kid tagging along with the older ones wanting to see how things work and be a part of the world. Kenny and Company also documents the first awakening of romance, that first crush and the desire to get to know the girl – and kiss her. It’s from a period, where childhood and adulthood are still far more firmly separated than they are today. 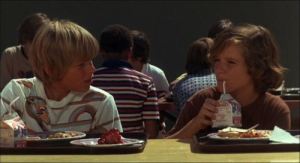 Mike Baldwin from Phantasm is in this film, but he isn’t the supporting lead… he’s the secondary lead. However he is very much playing the prototype of the character that he would later immortalize in the phantasm films… Indeed I can see this as being what his character would have been like in those films if he hadn’t been haunted by the mysterious tall man. He’s handy with a hammer, foul mouthed, Brave and brash.

There is a sort of dreamlike quality to a lot of the film, a Coscarelli trademark.  Still, the dialogue ring is very true and it’s definitively in Coscerelli’s style. In the end, I found myself entranced– completely sucked in.  I genuinely didn’t expect to like it as much as I

did… These days, this is a perpetual Halloween watch… And interesting drama, mixed in with my normal slate of horror films. This is a must watch, if you can get your hands on it.

This entry was posted on June 5, 2018 by mathias42. It was filed under Director Retrospective, Don Coscarelli, Uncategorized and was tagged with Don Coscarelli, Kenny and Company.