For years I have been told that the Crow Wicked Prayer is the absolute bottom of the barrel. It’s the worst of all of the crow sequels. For that reason I’ve never actively sought it out, I haven’t exactly avoided it but I never gone out of my way to find the film either. If I would catch the start of the film and cable, I probably would’ve watched it all the way through or at least grabbed the VCR to record it and watch later. As it is, I’m only now getting around to it – the fact that it was included in this set was one of my reasons for buying. It’s  a convenient way to finely encounter this film.

The big problem with any of the crow sequels is that they are… Well, sequels that in their sequels to the sort of film that is impossible the follow-up that it wasn’t designed to be a franchise.with his graphic novel, James O’Barr managed to elevate both the revenge movie and the superhero story, fusing them into 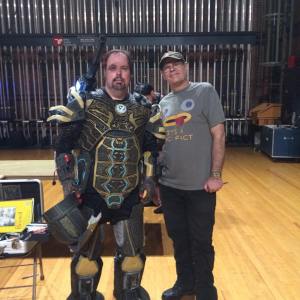 something that was extremely appealing to comic fans and to open minded literary types. When the story went to film, the director managed to keep the soul of the story while stylizing a look and managed to turn it into a genuine success, a box office phenomenon on that appealed not only to the comic book faithful but that was also embraced by mainstream audiences bringing entirely new fan base. The original didn’t chase after fashion or pop culture, but rather inspired it. It didn’t seek popular music but rather popularized the music that was in The film – there are very few soundtracks I can think of that are quite as influential as the Crow. So the problem comes when trying to make a sequel to it – just distilling the elements that worked while holding onto the heart and soul of the film. A sequel is generally going to manage to get one of these parts right but fails in the others.

One of the big problems in city of angels is that the villains are all just a little bit too freaky. The crow wisely kept the eccentric villain down to one – the big bad, where as all the minions were very ordinary, if scummy looking, guys. In city of angels every villain was a hyper realistic comic book looking freak – and when you populate a film with a bunch of people in funny costumes, it  immediately erodes the suspension of disbelief. I like salvation better, because it tries to get back to basics – not nearly as many strange looking people running around. The crooked cops storyline though in the end it was a downer– it doesn’t help my sympathy with the Leads. Still it was all a step in the right direction

Wicked Prayer actually works better then as the previous sequels and I love the Southwest setting, it actually feels like the mysticism of the crow. You can see that somebody really put their heart and soul into this, they really wanted to do something different, something original. The motif of the four Horsemen of the Apocalypse is a fascinating twist, but it’s under used – I would’ve liked to have seen more depth to this. Without real exploring, it almost feels like a label slapped on at the last minute. This time the bad guys are Satanic coven led by a charismatic leader who is swaying them by promising revenge against the men trying to close the mines where their families make their living. There is a surprising amount of Star power in this film as well. Edward Furlong, Tara Ried, and David Boreanaz are all in the ensemble – but Dennis Hopper also makes a cameo, actually a fairly significant supporting character and possibly my favorite part of the plot. Even Tito Ortiz and Danny Trejo get in on the action. The idea of using a Satanic cult – once again it’s a great idea although in some ways it feels underused.  It’s really a set up to empower our big bad at the very end of the film, but I would like to see more… David Boreanaz is arguably the weakest part of this bill. I don’t know what he’s doing here… He can give a much better performance than this, but he insists on being happy and goofy through the whole thing. I don’t understand why he’s playing this for comedy, it drags the whole thing down and undermines the very serious performances that everybody else is trying to give.   Tara Ried – this poor girl gets a lot of criticism, rightly so, She’s one of those same characters in every role she gets. Here you can see in her performance that she is trying really hard – and there’s moments when the role is just a little bit beyond her, but with a little bit more time to frame and push and edit it a little better she could’ve pulled this role off. She’s not miscast, which is the common criticism here. I think people were expecting her to be a carbon copy of Bai Ling’s role in the original – I don’t think that’s her purpose here all. I do think she is playing a bit of a dark sexpot, with momentary flashes of power. It’s a good role for her, and a good chance to scratch, but again she is undermined by Boreanaz’s poor choices.

Edward Furlong is an interesting choice for this. I’m not a fan, I’ve never seen the brilliance in his performance that everybody else seems to have admired – not even in his T2 role.  At times I almost feel like he looks too young for the part that but honestly that’s not the real problem here, the biggest issue facing his character is that the character has such a chip on his shoulder from the word go- it makes it very hard to sympathize with him. indeed, I think the producers realized that it was hard for the audience to connect with him, and they spent a lot of time playing getting-to-know-you. We do not see the appearance of the Crow in full make-up until nearly half way through this film – and that’s way too long to wait got in the Crow. Edward is a sort of angel with the dirty face. We never get an impression that he is anything but in all honestly a generally good guy. In fact killing seems unusual for him – a step too far. He’s got a troubled past, with an assault on his record, everybody in the town hates him and he’s ostracized – the only friend he’s got the lead person who cares for him at all is the girlfriend. I suppose setting him up as an outsider it’s not a bad thing, but he resents it – almost to the end. Perhaps we were supposed to side with him, but really it does not endear him to me. Still, as the Crow Furlong actually works. I didn’t think it would, but the more you look at it the more it becomes comfortable. I love the Indian feathers on the costume and those kind of touches to it – the fact that he drives around in a hearse though, is perhaps just a little bit too on the nose. It’s a symptom of the film trying a little bit too hard to be relevant to pop culture. Really, that seems to be the motive between a lot of this casting with people like David Boreanaz , Tara Reid, and Tito Ortiz. Let’s get young and hip and relevant – and I don’t think their presence there really manages to for fill that purpose.

The fight scenes and choreography are great. The director has a tendency to throw in a slo-mo shot here and there in a lot of these fights, I’m not sure if this is covering up something or if it’s just an attempt at an artistic flair. It doesn’t really do anything for the look of the film, but it doesn’t attract trouble either – I suppose it’s as much as we can ask for. Despite a rather slow first half, once I get into the second half of this film – it really does start to feel like Crow, and actually possibly more so than the other sequels. I’m really enjoying this film and I’m not sure that it deserves the vitriol that’s been heaped on it. I can absolutely see myself revisiting this film, and I wish that it had occurred earlier in the cycle. If this had been the first sequel to this series, I think it would be held in high regard. I may be starting at halfway through the film though – the origin story does take a little bit too long, but that’s a common problem in superhero films and it seems it’s produces were just following the trend of the day. I like Wicked Prayer. In my opinion this actually maybe the strongest of the sequels, not the weakest – and definitely worth the two dollars that I plunked down for this box set. The next time it’s on sci-fi, grab a bowl of popcorn give this one a chance.

This entry was posted on June 19, 2018 by mathias42. It was filed under Masters of Terror Vol 1, Superhero movies, superheroes, superheros, The Box Set Project, Uncategorized and was tagged with The Crow : Wicked Prayer.