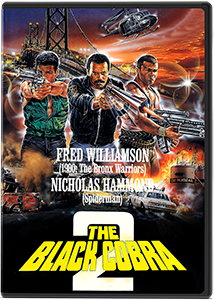 I’m going to admit, I like this one better than the first one… Action films frequently work this way – where the character gets a little bit more established and the pace of the film just runs better in the second instalment.

In this film, Williamson’s character is transferred to a special mission in the Philippines. As silly as that sounds, it actually helps the movie establish it’s own identity and distinguish Williamson character as more than just a generic action hero

He’s still a bit of a loose cannon, with a  style that is deemed too reckless by his partner – this time around played by Nicholas Hammond, of both the Sound of Music and the Spider-Man television show. There is chemistry there though, and the buddy cop format is a good match.

In retrospect, this may well be my favourite instalment of the Black Cobra series… The format is running on all cylinders, and Fred Williamson is at his best here.

This entry was posted on August 9, 2018 by mathias42. It was filed under Black Cobra, Franchise Focus, Uncategorized and was tagged with Black Cobra, Black Cobra 2, Fred Williamson, Nicholas Hammond.