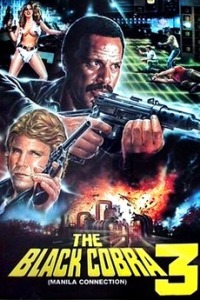 Black Cobra 3 starts off with a very ramboesque action sequence in what I can only assume to be the Manila jungles. I’m searching my mind try to remember any mention in the previous Black Cobra movies at any Vietnam experience or military training. Because really at this point I just don’t understand where this series is going. The whole globetrotting cop thing doesn’t quite fit – but that does appear to be the idea. I almost wonder if this started off life as a completely different movie (or script) and was rebranded because somebody had Fred Williamson.

Malone is in the Philippines at the request of an old one buddies son – an interpool agent in an investigation. I kind of find myself missing Nicolas Hammond here – our new young sidekick is fine but it feels very much like a seems like a missed opportunity to create some semblance of continuity from these movies.

It ends up being a very by the numbers action film. In a way it seems to be confused as to what kind of film it wants to be.The middle section is very much a martial arts kind of action film – with Fred employing his fists and feet. However once we get to the third act we are back in full and Rambo territory with M-16 and guns over the place. Fred let’s fly his share of bullets as well, and it’s dumb fun with big guns, full ammo belts and a secret installation deep in the jungle to do battle at.

Altogether, it’s every bit as fun as the second one , Perhaps even more so with an increased scope-though it doesn’t play pass the watch test