King of the Zombies 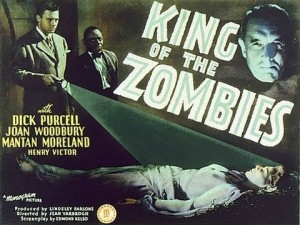 Ever since I first saw clips of it in Zacherly’s Horrible Horror, King of the Zombies has been one of my favorite zombie films. And the heart and soul of this movie is Mantan Moreland.

These days his kind of performance in both this and the follow-up Revenge of the zombies is considered racially charged, politically incorrect. But I never saw a racial stereotype here. I always saw a comedian, a goof whose charm and zany antics rivaled the talents of Lou Costello. His wit, his bulging eyes and frantic energy never failed to make me laugh.

It’s more than that, in a lot of ways, he felt like the everyman to me. As the postman in 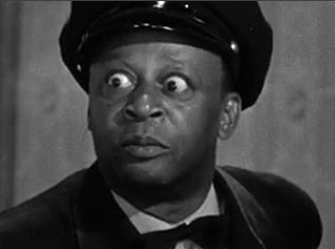 Spider Baby, I certainly relate to him, the ordinary guy who’s just doing his job, and in King of the zombies he’s not the statuesque heroic dude like our stars. no indeed, he’s the poor slob who actually does the leg work. He uncovers the plot and his fearful reaction to the
zombies is perhaps the most reasonable of them all!

King of the Zombies is a regular selection here at Argo city, and it’s not unusual to see Spider baby or Revenge on my TV as well. Check these out the next time they come up on something like Svengoolie and let Mantan Moreland make you laugh all over again.

This entry was posted on September 13, 2018 by mathias42. It was filed under Argo City Movie Night, Uncategorized and was tagged with King of the Zombies, Mantan moreland, Spider baby.