“Dude, looks like Metal arms are in this year!”

I looked in the direction the voice was coming from. A Winter Soldier was pointing to the prosthetic Borg arm being passed back to me by security after their examination. I slid it on and nodded.

I pointed to the Sinister Six group. Doc Ock and his four static robot arms turned and smiled at us.

There were scheduling conflicts last year and I missed HOF, though I heard glowing reports from friends that attended and I really dug the cons first year (when it was MY turn to be Doc Ock!). It’s good to see that the show is growing at a steady, healthy pace. not too fast, not to slow. They’ve figured out a better way to maximize thier space too. It wasn’t shoulder to shoulder the way it had been in 2016.

I decided to try and hit the line for Kevin Eastman first. I’m not really a Turtles fan, but I respect the property and love the success Eastman became because of it. I found my friend Eric wearing his Jurassic Park outfit and waiting in Eastman’s line so I swung by to say hello. He expressed shock at me not being in costume yet and tried his best to convince me to do the costume contest. I wasn’t sure how long I was going to hang out and the contest was still five hours away. Still, waiting in this line would kill a good chunk of that time. It was a prodigious queue, curving down the end of the hall and I tried to find the end of it, only to be stopped by security. I was informed that the line had been capped at 150 people ( which they hit in the first 45 minuets of the show) and that I’d have to come back in three hours for the second signing. This situation was just a little too reminiscent of the confusion and poorly run ticketing system for George Perez the last time I was out here, but perhaps I shouldn’t have been surprised. The convention schedule, released about a week in advance, had shown two specific “Signing” times – a weird thing for a comic convention like this (I see it regularly at anime cons, but not at comic cons), and It had spooked me. I decided to head elsewhere. After all, I wasn’t REALLY here for Eastman. I was here for Peter David.

Back in the 90’s, David was instrumental in shaping the the direction of DC’s Star Trek line, having taken it over from Mike W. Barr. This is my favorite era of Star trek and those comics have always been special to me. From there I migrated over to his novels  – Rock and a Hard Place is my favorite TNG book ever. I took my place in line right behind one of the guys I knew from Panels:The Comic Club.

Approaching his table I pulled out a gift I had brought him. He picked up the furry blob and looked at it.

He rolled his eyes in disbelief.

“I don’t know how I’m getting this through airport security…’what’s that in your bag sir?’ ‘um, it’s an assimilated tribble….?’ ‘OUT OF THE LINE!’ ”

He confirmed my suspicions about the Stone character in Rock being a prototype for the hero of his New Frontier books, though he has no idea what my have happened to him afterwards. I followed him to his panel and was fascinated by his stories of how he got into comics, and the way he kind of drifted into different assignments. It’s been an interesting kind of career.

I popped out of the panel a little early to go get into costume. I had decided to do the first half of the show in normal clothes since it was so hot and my Borg suit wouldn’t fare well 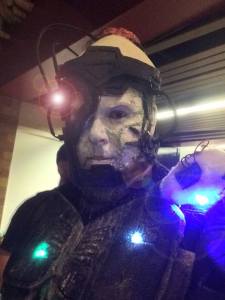 in the end of summer weather. I applied the makeup in my car (God bless the guys at Rubber City Cosplay by the way. They offered to let me suit up and do my makeup in by their booth where they had a station set up. I had to decline because I was using latex and needed my car heater vents to dry it). I was trying something new this time – instead of just drawing sick green veins on my face I built them up using cotton and latex, THEN drew the green lines on the swollen veins. It ended up being the first time I found myself truly happy with this look.

Because I resent being charged for parking, my car was half a block away, parked in front of a house. Suddenly the door burst open and a slightly scary looking man stormed out staring at me.

“DUDE! I just had to run out here to see this,” he exclaimed in amazement. “That thing is off the HOOK! What’s going on?”

I explained about the con around the corner and waved goodbye. A car load of kids drove by headed to the Wendy’s across the street from the Canton Civic Center. They yelled at me from their windows and asked what my character was called. I told them I was a Borg and waved, trying hard not to squint. The heat was making the white greasepaint run down into my eye. I crossed the street with one good eye, and fished the

napkin out of the hidden compartment in my belt, then cleared the tears and makeup from under my cowl. Outside the doors was parked the greatest vespa scooter EVER, painted red with decals to look like the bike from Akira.  I reapplied some white as I wandered back in, thankful for the cooler temperatures in the convention hall.

This time out, I made one more upgrade to the Borg suit. I added a borg tribble of my own (with more lights on it that the one I presented to David) who would sit on my shoulder (magnets in the tribble and my costume). One of my favorite moments was a family coming up to me and asking for a picture. The little daughter, riding on mommy’s hip wasn’t too sure about my robot in corpse paint. I plucked the furry little ball off my shoulder and asked if she’d like to hold the Tribble. “He’s soft,” I explained as she  snatched him from my hand. The camera got a big smile from her. 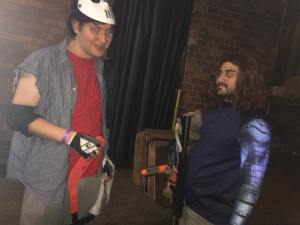 Across the hall, I spotted my friends Rocky (also dressed as a Winter Soldier, but also carrying around Rocket Raccoon) and Chris (Appropriately garbed as Casey Jones), who had just arrived. I let them know about the early lineup for Kevin Eastman and we headed that way.  It wasn’t quite two yet, but the line was already the length of the civic center. As we stepped into the queue, I saw Ben from comic club rushing from the Eastman’s presentation and  heading down the hall. I waved him over.

“Man, this is crazy,” he exclaimed. “It never occurred to me that people would actually duck out of Kevin Eastman’s panel to start lining up early!”

I introduced Ben to Chris and Rocky, and explained comic club. We all made a little nest in line. The guys chatted about new costumes, Infinity War and Turtles while Rocket and my Tribble got into fights.

“I was heading into the parking lot,” Rocky told us. “Rocket Raccoon was in my passenger seat. The guy at the gate took my money then looked in and said ‘You guys have a good time’. So apparently Rocket counts as one of the guys…”

To quote A Christmas Story; “The line stretched all the way to Terre Haute, and I was at the end of it”.  Still, it was good to be with friends and we eventually got our stuff signed. I noted the “No posed photos” sign and slipped Rocky (ahead of me in line) my camera to

snap shots of me meeting Eastman. Kevin drew “Casey Jones Doodles” all over Chris’s hockey stick, and loved my outfit as my borg arm handed over my comic using it’s claw. His assistant asked for a photo.

“There’s a LOT of cosplay at this show isn’t there?” Eastman asked. I acknowledged that Ohio has a lot of interesting costume culture.

There was just enough time after we got out of the endless Eastman line for me to plow through the 3-for-$1 bins, scoring about thirty books as well as a handfull of small pokemon for me to bring home to the kids. My backpack sagged on my shoulders, heavy with comic books as I headed backstage for the costume contest.

My name rang out. I was late and Spider-Man was looking for me.

“Coming! Coming! I’m here!” I panted as I shuffled off my backpack and stowed it under a backstage chair. Spidey pointed to the second line. 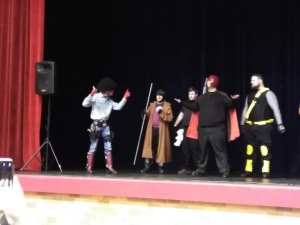 I walked over and pointed at the floor.

Spidey gave me an exasperated smile and swatted me away. Looking around I found myself next to my friend Jason, who was ready with a quick change Clark Kent/ Superman costume (much like the one Maddie wore to NEO). Seems like I had friends to keep me company in every line I found myself in. Cassie and Vito were too far away for me to reach, but Dwayne snuck up behind me and greeted me – I hadn’t even recognized him in costume!

HOF is a good con, and consistently brings in top talent like no other convention its size. If they could just figure out how to handle the crowds for those guests, it would be a near perfect show. That and ditch the charge for the convention hall parking lot (Akron comic con, and Geekfest both managed to provide free parking, Heck, CONCoction MOVED so they could). Still, it’s good vendors, exceptional guest and good times with friends. Barring further schedule conflicts I expect to be back next year! 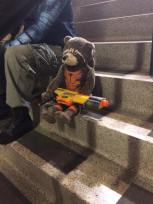 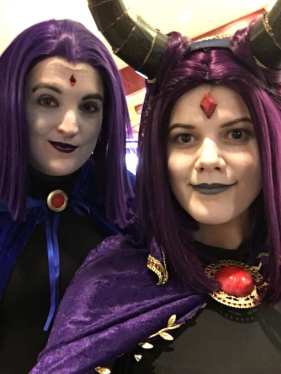 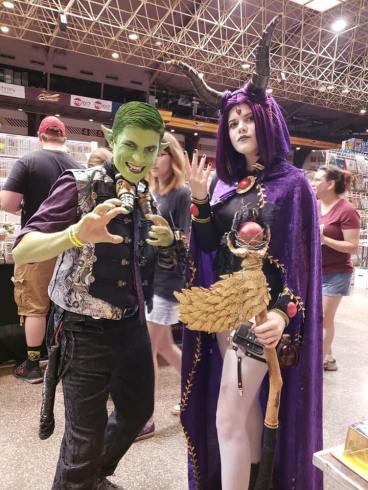 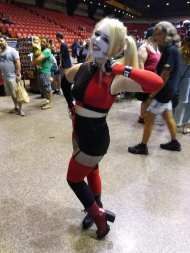 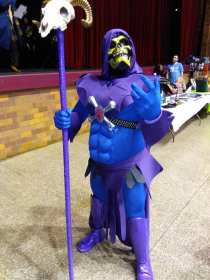 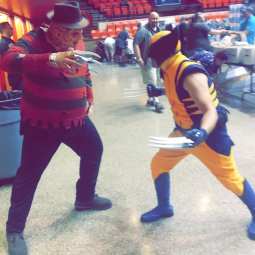 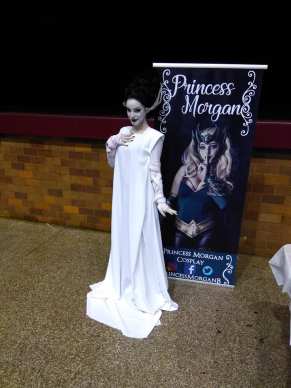 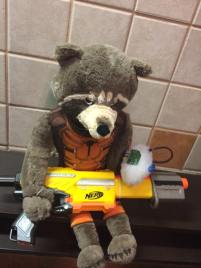 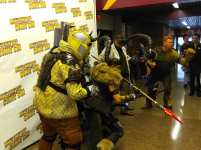 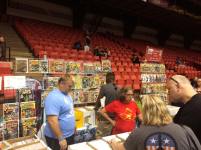 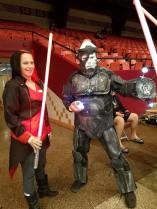 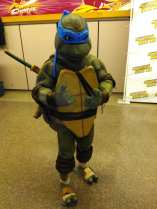 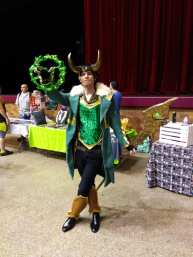 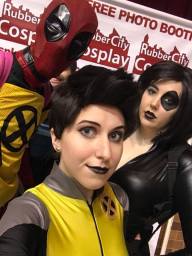 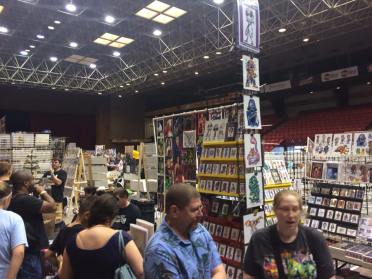 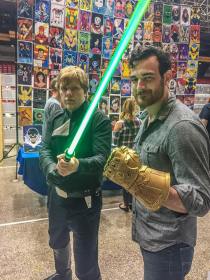 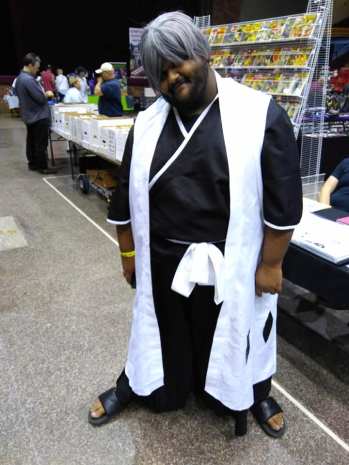 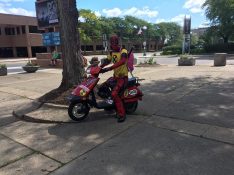 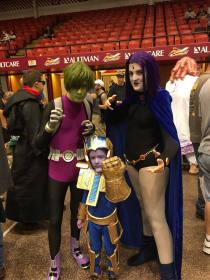 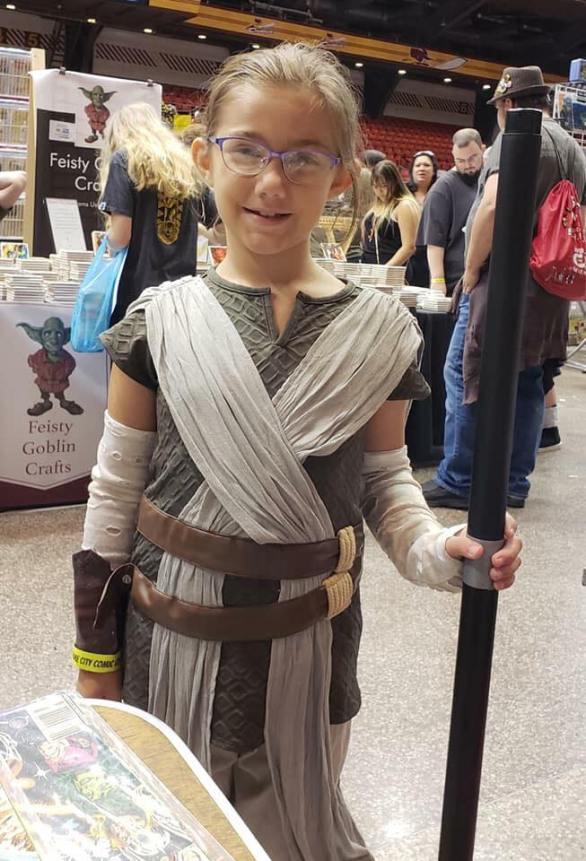