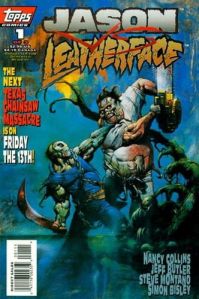 This is really a case  I think, of tossing a bunch of stuff out there to see what works. Topps always had mixed results with thier comics and this is one of the more mixed I can think of.

On the surface these two franchise seem somewhat compatable. Silent masked killers, somewhere out in the middle of nowhere, however, the georgraphy is a bit daunting. Texas is nowhere near Crystal Lake (whether it’s in New Jersey, New York or somewhere nearer to Ohio) but somehow they make this find a way.

What really stood out to me in this series is how well thought out things were and how logical it was that Jason would be embraced into the bosom of the murderous TCM family (named “Sawyer” here – curious, because that’s the only reference to any of the sequels we get here).

My biggest problem is actually the Sawyer’s themseves. TCM is hard to translate to comics in the first place and in this they are presented as almost cartoonish, their

illustrations done one step down from caricature. Jeff Butler is a capable artist who I loved on Mike Baron’s Badger series, but I think he just wasn’t sure what to do here.

Ultimately it feels like a good idea executed poorly. They had a good concept to start off from, but just didn’t know where to go with what is essentially a one-note gag.

Pick this up if you see it in the quarter bins. It’s worth a look for the novelty if nothing else.

This entry was posted on September 27, 2018 by mathias42. It was filed under best comics you never read, Uncategorized and was tagged with Friday the 13th, Jason vs. Leatherface, Texas Chainsaw Massacre.