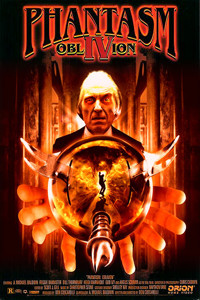 I have my own theories on why Phantasm 4 kind of tanked. Admittedly, the sequels that succeed the second film are all of a week quality, but it seems sometimes that Phantasm 4 gets a much worse reputation then Phantasm 3. I think some of it has to do with limited budget – and that limited budget does show, in other places I think it has to do with the fact that it gets confusing if you’re not already intimate with the series. The tall man is not quite as scary here There’s a lot mystery and it seems to be setting something up… something that never quite materializes. Distribution is a big deal too. A lot of people didn’t know that Phantasm 4 ever came out until it hit the Syfy channel… Those that did know, expected something different.

For a few years, there was a concept for a series finale called “Phantasms End” – it was a post apocalyptic adventure that might just start Bruce Campbell alongside Reggie Bannister where a disease ravaged the Earth and the Tall Man was at the centre of it all. 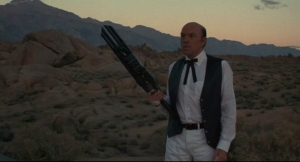 Don Coscerelli really couldn’t raise the funds for this movie and 4 was designed to generate interest and revenue in an attempt to get Phantasms End off the ground. It failed, and for the fans who were expecting Phantasms End but instead got Phantasm 4, it felt like a disappointment.

Taken on the own though, this is actually quite a remarkable film. Coscarelli pointed out that his cast hadn’t changed. We are inundated with flashbacks to the original phantasm – unused footage that at been stuffed under Coscarelli’s mattress at home, and is interesting because that’s not some child actor playing Mike Baldwin – it really is him,

decades ago and young. The flashbacks in the misdirections yield a dreamlike quality, and an even more surreal tone then what has come before. It’s perfectly at home in Phantasm.

It is also once again, a beautiful reunion with the guys and I actually can easily watch this over and over again. My only real criticism, is that it’s very much a middle film – a transitional movie with nothing to transition to… at least, not for another 18 years…