The Lake on Clinton Road 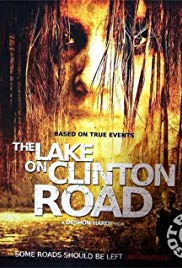 We start out in a police interrogation room with a woman being questioned about her drowning her son. A glass of water tips in front of her and she goes NUTS, screaming “He’s not dead!”

We dive into credits overlayed on news articles about haunting in Clinton road and the nearby lake and the scene is set. Once we ull out of the credits (complete with the eye rolling addition of “Based on true events”) we dive into the story proper, discovering that the whole interrogation was part of a TV show. We’re then introduced to a bunch of 20-something CW types on a road trip, goofing off in a mini van, in the woods, in the cabin all with the same annoying synthpop running over it. (Could be worse. It could be metal).

Thre’s a half hour of this before we even get a glimpse of creepy. But once you see it, you know exactly who’s going to be heading off on tonight’s killing spree. They get some credit for trying to haunt us a bit before peole start going missing. However, the Grudge, this ain’t and the flat lighting seriously undercuts the fright factor. Even the strobe lit finale is overexposed. The ghosts, or whatever they are, just aren’t that scary, though a number of the haunting effects are quite clever and the use of sped up frames is quite effective.

I really like what they are trying to do here, but the film lacks the necessary tension to make a capable use of it’s fun effects and decent story. Maybe crank up  the contrast on your TV before watching. It’s worth a view, and is the kind of movie that would kill on the festival circuit.