You may remember me doing an article last year on a film called “Roller Blade”. It was the surprise feature screened at the Cedar Lee and it seared my eyes out of their sockets with it’s absurdity.

I had to know more. I needed to understand how such a thing could be made in the first place, much less spawn sequels.

Yes, sequels. Roller Blade ended with a title card promising a sequel which I was assured existed. That was it, I had to know more. A quick check of IMDB showed that not only was there a sequel, there were several…but it gets confusing from there on out and it’s hard to tell what is what. We’ll get to that in a moment, but first let’s do a quick recap of the lunacy that is Roller Blade. (for a more in depth review, hit the previous article on the subject here; https://argocitycomics.wordpress.com/2018/12/04/roller-blade/)

In a post apocalyptic future a group of nuns in red and blue KKK robes do battle in the wastelands wearing roller skates and carrying butterfly knives. Led by Mother Speed and occasionally assisted by Marshall Goodman, they struggle against the gangs of punks on skateboards (because roller skates would be too establishment I suppose) and the minions of El Santo’s evil twin and his demonic hand puppet who live in the acid factory.

There. You’re caught up.

So what happened to RB2 : Holy Roller? I can’t be sure. Donald Jackson, the director and guiding force behind all the Roller Blade films,  passed away back in 2003 so he’s unavailable for comment, but some interviews do remain. He was known as the Ed wood of the video age, and watching his films it’s easy to tell why.  Roller Blade, made on 16mm film for about $5000 was absolutely a success. Jackson had been working for Roger Corman’s New World Pictures at the time in various capacities. They had acquired his movie “I like to Hurt people”, a wrestling documentary for fifty thousand dollars which financed his way to Hollywood. He parlayed that relationship into other work for New World, operating cameras. While he was making contacts with folks like Fred Olen Ray (Who’s son and girlfriend would both end up in Roller Blade) and James Cameron, “I Like to Hurt People” had made New World half a million dollars. Through these kind of contacts he managed to convince New World to pick the film up for distribution. When they came to him asking if he had anything else in the works, he quickly cut together a three minuet trailer to screen for the execs. They watched it in silence and then stared at Jackson, his heart lodged in his throat. Mentally the execs did their calculations. Finally one announced that they could probably move 10,000 units which would turn a profit. This occurred at a time when the video market was just beginning to take off. Roller Blade was hyped by New World as, “The First Straight to Video Feature Film”. They took out full color ads in Billboard magazine and advertised the movie in Variety – all common for a theatrical film, but at the time completely unheard of promotion for a video release. Roller Blade made them over one million dollars. New World was still a player in 1989 when the next film was made, but

they weren’t a part of it. While they did fund Jackson’s next film “Hell Comes to Frogtown”, the experience was marked by constant creative differences between Jackson and the studio.

“After Roller Blade made them a million dollars I didn’t have to even show a trailer for the next film. I only had to say one word; ‘Frogtown’. They said okay and gave me a million and a half dollars.”

The increased budget and addition of star power  was given in exchange for a great deal of Jackson’s creative control, and by the end, he never wanted to work with them again. He would later talk about the experience in interviews;

“I am a very hands on Director. The downfall of the relationship all stared at one point, the first day of shooting, when they had an art director creating one of the sets. When he finished, I checked it out and it all look too clean and pretty to be a part of the film. I told him about it, but he didn’t listen. He had all the arrogance of an art director and felt he had to answer to no one. So, when he stormed off of the set, I got a few can of spray paint and went and spray painted graffiti on the wall of the set. When he came back, he freaked out. He complained to the powers at New World and they had a talk with me. They told me, “Everybody has their job on a studio film. Yours is to direct the actors.” So, that was the beginning of the end.”

To complicate matters further, New World was beginning to run into financial difficulties and after striking 2000 prints of “Hell Comes to Frogtown”, the film still ended up going direct to video. When it came time to return to the Roller Blade series, Jackson was on his own. The concept of Holy Roller (More a place holder title than anything) no longer appealed to him. The concept had moved on and would now become Roller Blade Warriors.

The good news is Roller Blade Warriors was actually a better film than Roller Blade. It looks like there was enough money to invest in something better than a consumer grade camera and someone learned how to use a boom mic. There’s not really a lot of information on this film though, and Jackson doesn’t speak a lot about it in interviews – it’s always much more about his later movies, the ones that were

more experimental.  He explains the move from knives to swords as part of his affection for Kurosawa  films.

“This was very intentional. Sergio Leone and Akira Kurosawa are two of my biggest influences. As we filmed the entire movie in a very spacious outdoor environment, I was allowed to pay tribute to these two directors and add my own style to the mix.”

An example of that style involves a story about how half way through Roller Blade Warriors, Jackson ripped up the script and winged it through the rest of production, foreshadowing his future film methods. Nevertheless, it’s possibly the best entry in the series. Roller Blade Warriors was successful enough to get a Roller Blade 3 green lit.

It’s at this point that things begin to get weird. Jackson hooked up with actor/musician/academic Scott Shaw during the preproduction of Roller Blade 3. The production was already in chaos, with one of Jackson’s crew interfering, staging a coup and stealing the investor. Eventually the production fell apart. However Shaw was still on board and Jackson was able to secure $30,000 for the two of them to create a pair of sidequels, set in the same universe but more far removed from Mother Speed and her convent.  In 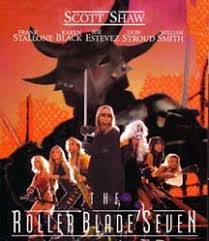 interviews he made it clear that was the intent from the beginning.

“What Scott Shaw and I did with Roller Blade Seven (and the Return of the Roller Blade Seven, filmed at the same time). Though the movie was based on the same premise, it was time to take the concept to the next level — which we did.”

That next level would be what Scott Shaw would dub “Zen Film making. A method of making film without scripts. You came up with a concept, ran the camera and filmed what ever happened next. Shaw recalls the moment he coined the term –

“We were in the office, discussing the results of the previous weeks endeavor. Don was fuming as he often did. Blaming others, as he almost always did. We decide that we needed to let go of all the structure and throw all of the plans that we had for the film out the window and just go out there and film. It was then and there that I came up with the title, Zen Filmmaking. “Let’s just be Zen. This is Zen. This is Zen Filmmaking.”

Sometimes there would be some guidance needed. words and phrases would be drawn from one of Shaw’s books Essence and Time, to keep the vision consistent. 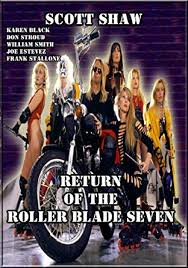 books by Scott… These books were made up of Spiritual Aphorism. So, this really kept the film focused on the spiritual essence of life — which is really what I wanted.”

In addition to the new film making style, there would also be technical advances –

“We also invented a new type of cinematography, in association with this film, known as, “The Roller-cam.” This is where we had a masterful skater film many scenes while skating around the actors using my Bolex. This gives the film a very spiritual sense of nonstop movement.”

“The way these character developed is the essence of Zen Filmmaking. We never had any plans for any of these character. In fact, just the opposite. We gave the people a little guidance and they did the rest.” 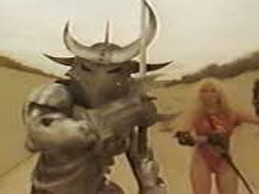 For instance, “The costume for the character Fukasai Ninja was just something our art director, Mark Richardson had lying around. He tuned it up a little bit to better fit the movie — so an actor could roller skate in it. And, bam, the character became a big part of the film.”

Shaw for his part has contended that he was ill used in the making of these films, never taking a salary because of the low budget, but increasingly asked to do more and more including casting, production and music.

“Don suggested I go and set up the fights. I figured I had some time so I was first working with the girl and her opponent. Maybe ten minutes into the session Don walks up, “Okay, let’s shoot.” But…Here’s the thing, Don didn’t even care that the people weren’t ready. All he cared about was getting something/anything on film. So, all of those one-on-one fights you see in the film were choreographed on the spot. I told them do this or do that, and that was that.”

Shaw claims this caused a break with Jackson (which is odd considering IMDB still shows them making movies together untill Johnson’s death) and he claims, Don said on the way to his deathbed, “I really want to apologize for what happen to you on Roller Blade Seven.”. When he passed, Jackson turned over all his film rights to Shaw.

The next part is where things get tricky, because the bad feelings and politics didn’t end with that. There was interest in another entry, but both films were so highly stylized and non-linear that there was difficulty finding funding or distribution. This is when the the executive producer, Tanya York decided to take things into her own hands, editing both movies into one feature and re-releasing it under the name “Legend of the Roller Blade Seven”.  It makes a certain amount of sense. Both RB7 and the Return are short films, clocking in under 90 minuets and incorporating a lot of re-used footage. However, the re-edit was in violation of York’s contract and alienated both Jackson and Shaw. Shaw took the film 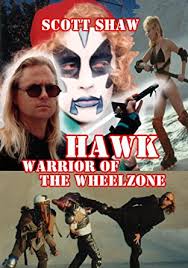 back and re-edited it himself, releasing it again under the title “Hawk, Warrior of the Wheelzone”. To make things more confusing, Shaw offers Lite versions of the films, unseen scene versions and his own Zen documentary on Roller Blade 3, the movie that never was. (Shaw by the way, seems somewhat disconnected from the reality of what things actually cost, offering each of these films for $25 on DVD – plus shipping. You can also get his autograph for a mere $125 on Band Camp)

For our purposes, We’ll be watching and reviewing only the “official” films and not Tanya York ‘s remix. This isn’t Blade Runner, and apocryphal mix tapes just muddy the waters further.