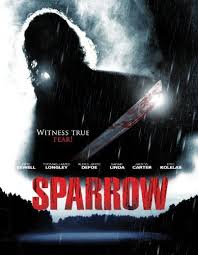 I actually really dig the scratchy, old-fashioned video in the title sequence overlaid with sloppy script writing on the credits… It’s an eerie score feels like a throwback to fifties movies.

It’s all immediately undermined by the honky-tonk soundtrack in cheap shot on video look as the film opens. But perhaps it’s just an Australian thing – ask the kids trekking out to the middle of the wilderness and build a campsite. Still, the banter is fun and the characters are charming and in absurd sort of way and I feel a little sad when the first one is dispatched about eight minutes in. If these are just are prologue characters, I’ve got great hope for this movie.

We switch focus to a bus heading out to the same wilderness and get an intro to our proper cast.

The clever banter continues as they roll past a sign that says “camp happy dreams “ . Ann has a rope swing but no bathroom.

As the second act begins, the tower scary story around the campfire which set up our colour and there is a passive resemblance to killing we saw in the prologue. When the killing starts by the way, it’s glorious. Good looking FX down well. Aside from this quick spree though, the second act passes uneventfully with an attempted character… By this time though, we don’t really care, we really just wanna see people getting stalked and there’s not quite enough of that in the musical interlude and endless soccer games. Things don’t start to get dyer again until we are at the 53 minute mark with only 18 left. This is really

its main failing / I can forgive digital blog, but born killer? That’ll drag your film down real quick. it’s almost as if they didn’t have enough second act story so they just extended the first. Better pacing with make this into a genuinely good movie – that or cutting it in half to turn into a short.

Sparrow is still one of the better sad, in the world that for some of the good stuff that happens, but keep your thumb on the fast forward button.