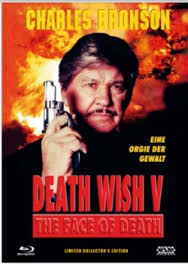 Man, that’s some ominous music – and there is no Canon logo here. None of this bodes well.

I’ve got to be honest, I didn’t even know this one existed. And with this kind beginning, it’s very different tone. I’m a little perplexed at what Bronson’s doing at a fashion show… It doesn’t quite read correctly. Still it’s a very 90s sort of intro and look.

Bronson is finally beginning to show his age as well. While in previous films he could pass for 40, in this one he is looking every bit of man in his late 60s and early 70s. It’s a problem, and one that I would usually dismiss… but the truth is the lines on his face are so deep that just a can of hair dye wouldn’t have been enough to make him look younger. The fact that he issurrounded by much younger actors brings their problem into even sharper focus.

Of course Bronson should know better than to ever propose to anyone because it means she is immediately going to be assaulted – though to be fair he probably couldn’t have foreseen her getting her face smashed into a mirror by a transvestite in the ladies room. Like I said, things feel different this time – even that moment where he snaps the chamber back into his vigilante gun, it’s framed differently, almost heroically. Indeed, when I saw the way they were lighting both the previous and following scenes with that dramatic blue lighting – I knew I was in a comic book.

The lawyers, headed by Saul Rubinek, are practically cartoons and the mafiosos are standard issue bad guys with big guns and lots of bullets. Also, don’t forget the obvious stunt men in bad wigs. Hint if the stunt man has his full face on display, you

don’t want to show the stunt in slow motion!

Despite all this, it’s the best looking  of all the Death Wish films. It’s nicely shot, on great looking sets. A bit of a drag now that Bronson doesn’t start killing people until literally the halfway point of the film. In fact, for an action film it’s actually quite slow. And then, once Bronson finally starts taking the law into his own hands, he’s not shooting! He is using new and innovative ways of dispatching his enemies but that’s not what the deathwish films are all about is it? Acorrding to Brnson’s Loose, he’d begun to tire of the same old thing and really wanted more interesting kills and found a director who agreed with him.  It’s weird, even when he does use a gun, it’s not a gunshot that usually kills the bad guy – they fall into a vat of acid or ground up or some other ridiculous whammy. All around it’s just a very different kind of action from what we’ve seen in this series, and I can’t help but wonder if this didn’t contribute to it being a box office failure.

There’s more to it than that of course, this movie was released in 1994, after the death of the over-the-top action film (in my opinion, the last action hero signals the end of that era – and that film was released in 1993). Indeed, Stallone and

Schwarzenegger were both trying their hands at comedies, seeing the decline of the action genre. This, combined with a Bronson that genuinely looks too old for the role, then budget, and practically no publicity (I don’t remember seeing a single commercial for this movie – and in 1994 I would have been just old enough to go see it by myself), it’s no wonder the film sunk. It’s not a bad movie in of itself, but it’s an odd sequel and definite direct to video fodder.

So, that wraps up the Deathwish series doesn’t it?

Wait, what do you mean there’s one more film?

This entry was posted on April 25, 2019 by mathias42. It was filed under Death Wish, Franchise Focus, Uncategorized and was tagged with Death Wish, Death Wish V : The Face of Death.