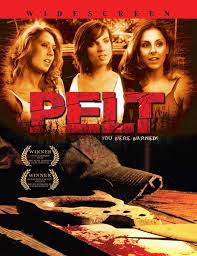 Pelt lifts it’s intro directly from “The Texas Chainsaw Massacre”, right down to the sound of the photographs. This way we know what kind of film we are getting into before it quickly transitions over to the local bar. A group of party girls and their boyfriends plan a backpacking trip (and getting on the wrong side of the local bikers) following a trail which of course takes the least traveled route… Easier to get them lost, you know? The trail they’re looking for however, goes through private property (That’s what we call foreshadowing).

Once they set up camp for the night, hijinks ensue. The killing starts just before the half hour mark.

The comparison is to TCM aren’t unwarranted though, it’s redneck horror with some 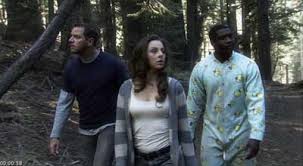 scattered influences. The moment one of the girls crashes through a window to escape the killer once again reminds me a lot of TCM – though they take it even further with a glass gag that will make you squirm in your seat. Indeed, there are more than a couple of cringeworthy snares built-in to this film, gore that isn’t cartoonish like “Hatchet”, But crueler and more uncomfortable like in “Saw. For instance, the actual “Pelt” scenes again feel like TCM to me, but cranked up to 11. 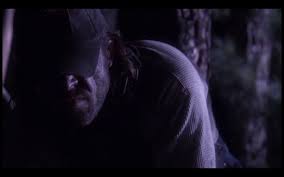 Pelt maybe derivative, but overall it’s good solid bloody fun. It’s worth a spin on Netflix, might even be worth buying this set for!

This entry was posted on May 23, 2019 by mathias42. It was filed under Pretty Dead, The Box Set Project, Uncategorized and was tagged with Pelt.