While I’m a fan of the Conjuring movies, I hadn’t gotten around to the Annabelle ones until recently, but when I got invited to an advance screening of Annabelle Comes Home, I figured it was time to change that, so I sat down and watched both Annabelle and Annabelle Creation before heading out to the film preview. It’s a great universe James Wan has created here, growing it slowly and organically. It works and while the Annabelle films aren’t perfect, they’ve always been good sequel fodder. Annabelle Comes Home changes all of that.

This movie is not only a great sequel, it’s also a great film in of itself. That’s a hard trick to pull off, but this move manages to fit into the mythology and push it forward, while simultaneously standing alone quite well and giving us a movie that is every bit as terrifying as the first Conjuring was.

I went into the film cold and was genuinely surprised to see Ed and Lorraine Warren so prominently featured. They don’t stick around long and are gone before the midpoint of the first act, but it’s organic – you don’t really even notice their exit (kind of

like those “lite” episodes of Doctor Who, like Blink, where the Doctor is really just a supporting character and not really in the episode) as the focus shifts to their daughter Judy, and her two teen babysitters as they spend a terrifying night in the Warren’s home. The premise is simple; what if all those things locked away in the Warren’s occult museum clawed their way out of their basement for the night? In this way, the film trances the Annabelle franchise and becomes something more. It’s not really ANNABELLE comes home, but rather Annabelle COMES HOME.

While the previous Annabelle films have been somewhat doll-centric, focusing on the doll and the evil spirit that travels with it (It’s not really the doll that’s the evil – this isn’t Chucky, rather the doll is an avatar and a conduit for demonic entity(s) in these films) this movie unleashes a whole host of evil spirits, ghosts and demonic influences. This is a hardcore HAUNTING and it is terrifying. McKenna Grace in particular turns out a brilliant performance as 12-year-old Judy Warren, a role that requires a level of intensity that should be beyond her years. She thwarts the evil

with prayers and crosses and is every bit a match for Annabelle herself.

The film never fails to be creepy, even when we’re doing the getting to know you thing in the second act, with laughs and aw shucks moments (Pizza Delivery guy, YOU’RE THE REAL MVP!) you can feel the dread creeping through, and by the time we hit act three, everything has turned upside down.  I watched the movie with a rowdy audience and as things rapidly spun out of control they shrieked and screamed in disbelief.

I understand why they didn’t want to open against Toy Story 4 and the Child’s Play reboot, but man, it may have been worth the risk, because this just blows them out of the water. Absolutely, DO NOT miss this film. Annabelle Comes Home opens in theaters June 26th 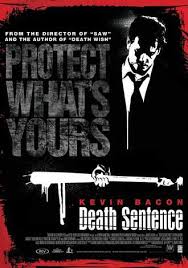 I bet you didn’t know that James Wan directed a Death Wish film did you?

Actually, that takes some explaining.

You see, there’s actually a sequel to the Death Wish book. The author, Brian Garfield, wasn’t entirely happy with the way the film turned out and wrote Death Sentance to rebut it and continue Paul’s story himself. 32 years later, there’s a film adaption (I know. I don’t get it either).
This is actually a pretty impressive cast. I mean Kevin Bacon is fine, and James Wan is always the mark of quality. Fun to see Aiesha Taylor from Who’s Line  (Although, Man does she look a lot different than usual! That severe pullback hair doo…)but you show me John Goodman I am on board! Goodman is brilliant by the way, as the gang

mentor – it’s a bizarre performance and totally unlike anything else I’ve seen him do before. I am consistently in awe of this man’s range.

Interesting, for the first time the main characters is accountant  (Which was Paul’s profession in the novel, not architect) though he still hasn’t got the same name from the book.

We’re well into the movie when we get to our tragedy. Using the old flashing-headlights-initiation-killing urban legend is a really interesting way of updating for the 21 st century. I’m glad that we are going up against street thugs once again. After a few films of the vigilante going out to the mafia, I like that we’re going back to basics. Death Sentance has created a street gang with all the charisma and

What’s interesting is Kevin Bacon succeeds everywhere that Bruce Willis failed for me. I completely buy his internal conflict, how difficult it is for him to begin his revenge. I totally accept his reluctance and clumsiness with his weapon (indeed, the early kills are almost accidental) and it makes sense because this is a revenge drama and not an action like the 2018 Death Wish was. It’s important to remember this because it doesn’t move fast like an action film does, or like a Death Wish film does. There is a great deal more attention paid to the family dynamics – with the family member who has been killed, and Bacon really sells it in one of the best performances I’ve ever seen from him. When we had a home invasion, I’d swear we’re at the end of the third act when in actuality it’s only the

second and the third act is just beginning.

It’s that last 30 minutes, and I kind of wish that it had come earlier. But come back to the original premise – this really isn’t a action movie, it’s a revenge drama. Sure there are some action elements, but that’s not the thrust of the film.

It’s worth waiting for though, very much worthy of the Death Wish legacy. By the way, fans of The Crow are going to notice A great deal of influence from that here too. Someone needs to get James Wan on that reboot Because this film convinces me he’s the man for that job.

There is a greater sense of finality in this film, something that I never truly feel from the Death Wish movies. That may actually make it the most fitting way to end this marathon. I’m glad I saw it, I’m glad I saw all of them. It was long overdue.

Aw crap. What do you mean I didn’t see ALL of them? and why are you speaking in German? (*sigh* We’ll be back with more)