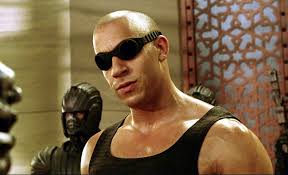 For the most part, when it comes to franchise focus I really have tried to stick with films that are a little outside the mainstream. You know, weird movies that have inexplicable franchises. Not so with Riddick. Despite being a failed franchise, most people instantly recognize Vin Diesel as Riddick and have seen at least one of the films on cable. So why go this direction? Something about these films enchants me – perhaps it’s the set design, perhaps it’s the character itself. In a lot of ways these movies remind me of old, ugly and gritty sci-fi, and that’s something that we don’t get enough of that in the 21st-century.

Nevertheless, the reason this ended up being a series instead of one article either in the “Defense of “category or the “case against” category is because once I started digging little deeper into the series I discovered there was more to it than I had realized – maybe even a little bit more to it then you realize.

Next time, will get started with the excellent first entry, and The movie that made me a fan of then diesel… and let you in on a little secret, it’s not the fast and the furious!

This entry was posted on September 12, 2019 by mathias42. It was filed under Chronicles of Riddick, Franchise Focus, Uncategorized and was tagged with Riddick, Vin Diesel.