I decided to end this year’s convention season softly, much the way I began it. I headed out to Genghis Con, which like OddMall is a smaller more eclectic event that I’ve been meaning to get to for years. Genghis Con is a small press, independent and comix event held annually in the Cleveland area. It’s always on the Sunday after Thanksgiving and yet despite being at the same time every year, I always seem to forget about it. This year with a renewed intent to visit shows I haven’t been to before I was determined to finally make the scene here.

Genghis Con has been held in a number of different venues over the years, beginning with the Beachland Ballroom some years back, and more recently finding a home in Lakewood. This year was their first time in the Flats, and I worried about finding

parking. I managed to score place on the street a block away from the venue, an old machine and tool factory, and walked the short distance, following other people who seemed to be in the know. The old factory space is a beautiful venue, with strings of lights hung by the wooden rafters and exposed brick, it has a very “arts district” kind of feel which is perfect for this event.

Genghis Con is a much smaller event than your average convention, kind of like the Artist Alley at a comicon – it’s a strange mixture of flea market and art show, with more local talent and lots of underground fare.

There is way more political activism at the show than your usually see in a comic convention, and a wider array of the strange and the weird. I spied creepy Christmas ornaments, weird magazines, comic books and graphic novels and greeting cards.Everybody had buttons and stickers, and I found a bizarre indie

Personally I was here for Derf. I had briefly met Derf Backderf earlier this year at the Pekar Park comic fest – a similar event held in Cleveland Heights. Derf had been on hand for a Q&A after a screening of My Friend Dhamer, the film based on his graphic novel. I had recently checked out the expanded edition from the library and wanted to get a copy of my own. I also wanted to get in autograph and a photograph – I didn’t have anything on hand when I seen him at Pekar Park and my camera had run out of space right about then so I wasn’t able to snap a pic either.

Derf had copies at his table and was gracious enough to sign a copy of the book, even doing a sketch of its titular character on the front cover. While I was getting my photograph with him, friends Mark and Mike drifted by waving and out of nowhere I spied my buddy Lizzy from Heroes United (a charity group we both do work for). I disentangle myself from Derf, shook his hand and went over to greet friends.

After I dashed across the aisle to grab a copy of that brilliant “Terrible He-Man Figures” ‘zine from Mullet Turtle comics I’d seen earlier, I ended up hanging out with Mike and Mark, and wandering the convention floor with them – watching Mike get his comics signed and picking up a blank covers for the Carol and Johns art show later this month. We chatted about the art that we saw, incivility on the internet, and I introduced them to my friend Lizzy who was relieved to finally have somebody to talk Star Trek with.

At the vegan booth I gentleman offered us brownies and asked just each who our favorite Doctor Who was. Mike chose Tom Baker and I am immediately replied Jon Pertwee. It made the bakers day to discover people who replied something other than David Tennant, and we laughed our way down to hook up with other friends. My friend Craig from the Panels comic club slipped me his latest work, a wrestling story with a anti-bullying team, and I grabbed some horror material from one of the other booths.

Genghis Con is fun, but not necessarily my thing. I expected to probably be in and out of there in less than an hour, but meeting up with a surprising amount of people that I knew really made it a nice day – there are far worse ways to spend a Sunday afternoon then hanging out with friends and admiring local art. This probably won’t be one of my regular stops, but I can definitely see me popping back here in there 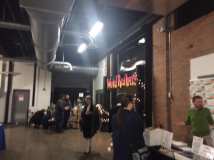 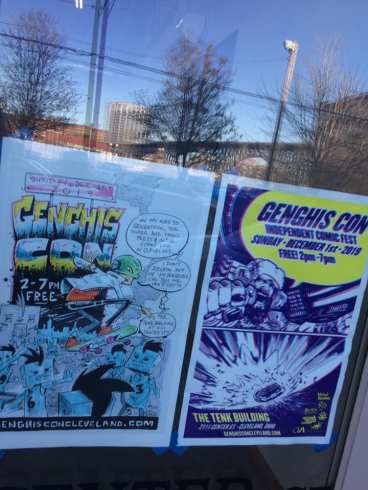 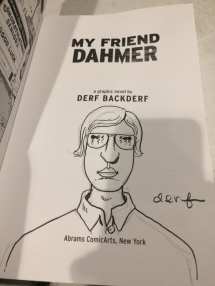 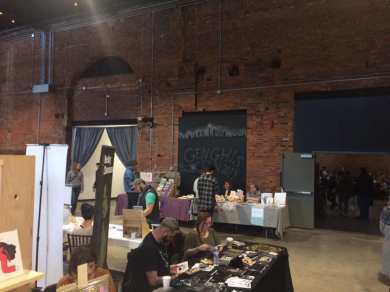 This entry was posted on December 3, 2019 by mathias42. It was filed under Comic Con, Comic Convention, Con Man, Current Events, Uncategorized and was tagged with Derf, Genghis Con, my friend dahmer.