Let’s start right off the bat by dispensing with the word remake. The Invisible Man is not a remake of the classic universal film, nor is it related in anyway shape or form to the novel written by Ralph Ellison. The only thing that this film shares with those other stories is that is the titular gimmick. If anything it should perhaps have been called AN invisible man rather than THE invisible man.

I realize that’s getting a little nitpicky, but I want to make sure you know what you’re getting into with this film. This is not just another universal monster movie. The Invisible Man is a tense thriller rather than a horror film. It begins with woman named Cecilia 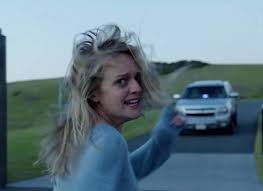 escaping her overly controlling, brilliant scientist, and sometimes abusive boyfriend. Two weeks later she discovers his committed suicide, and that’s when strange things start to happen around. It would’ve been a good idea to lean into the paranoia here, but the problem is the very title of the film tells us exactly what’s going on, and we already know Cecilia isn’t crazy. As a result, when we arrive at the climaxes, instead of feeling vindicated, it becomes more of an adventure in search of a resolution.

That’s not to say this is a bad film. They do extremely well in the first two acts with the small things, the little scares. Things like the door chain swinging back-and-forth or the hairbrush being in a different place after we pan away. Because they do the small scares so well, they earn the bigger ones. The film definitely moves us from climax back to

tension back to climax and back again several times, and does so at an impressive pace. When the moments of horror come, they are truly shocking.

Nevertheless, the film does suffer from predictability. It’s reasonably easy to tell what’s going to happen next and where the plot is about to go, though there are enough twists and turns to occasionally make you second-guess. Without spoiling the ending, they attempt a bit of a twist there but then immediately undermine it in an attempt to have their cake and eat it too. I can’t blame them, they’re obviously setting up for a sequel, and one that I wouldn’t mind seeing.

Ultimately, this is a well-done thrill ride and well worth the watch. The Invisible Man opens in theaters February 28

This entry was posted on February 25, 2020 by mathias42. It was filed under Argo City Movie Night, Uncategorized and was tagged with Elisabeth Moss, Leigh Whannell, The Invisible Man.