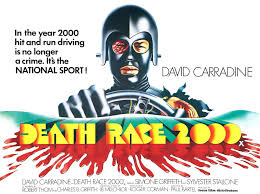 Long considered a classic, the thing about Death Race 2000 is that it’s the kind of movie that could only be made in the 70’s. And of course if you can remember the 70’s, you weren’t there. Well, I was there. But I was five as the seventies rolled into the 80’s so I don’t have the nostalgia for it that some do.

Still, there’s something about Corman in the Seventies that allows you to get away with David Carradine in a mask and cape, or Sylvester Stallone driving a car with a giant knife on the hood. Visually, this thing is a comic book. Yet it’s easy to see how the violence in this movie would have been a little out there for 70’s audiences. Today, in the era of Saw,

running down civilians and tossing a smidge of blood here and there is mild. In that era where transgressive cinema was really finding itself, senseless violence was a little more shocking.

In this story about a much hyped annual race between lethal contestants Carradine (the black cloaked champion dubbed “Frankenstien because he’s been put together so many times after too many wrecks) chews the scenery as he is want to do,  even as Stallone (in a role his agent probably should have run screaming to the hills from) grumps through the competition in a stylized 30’s gangster pimp suit. It’s not just  race to the finish, it’s a competition to murder your

opponents and as many innocent bystanders as possible in order to achieve a higher score.

The thing is I don’t hate it. I appreciate it on a classic film level and of course I revere Corman. But being raised on Splatter and being a fan of racing games like Carmegeddon (much the same premise, but with more wrecks and blood) this feels a little slow and tame for me. I’m glad to have seen it and I wouldn’t necessarily change the channel if it came up on TV one night.

Not until the commercials anyhow.