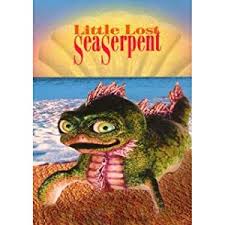 Little Lost Serpent is obviously Jackson’s attempt at a kids film. He’d do a few of these, financed by a company that was looking for family fare. It’s written by collaborator Mark Williams based on a script by Jackson.

The film begins with saccharine sweet music and a comically nonthreatening middle-aged man wearing a stupid hat and driving through the streets of LA, interspersed with random shots of the ocean.

He’s revealed to be an investigative reporter and meets up with his equally goofy looking partner, Conrad Brooks, and they head out in a beat up old car with obnoxious polka music playing in the background.

After a discussion about how no one ever sees any space aliens or Bigfoot’s, they head down to the seafront to see if there was anything weird on the beach. Once there, they check their equipment – stakes instead just in case of vampires, silver bullets in case of werewolves.

“But what if we find Frankenstein?”

“If you find Frankenstein you do just one thing, run!” 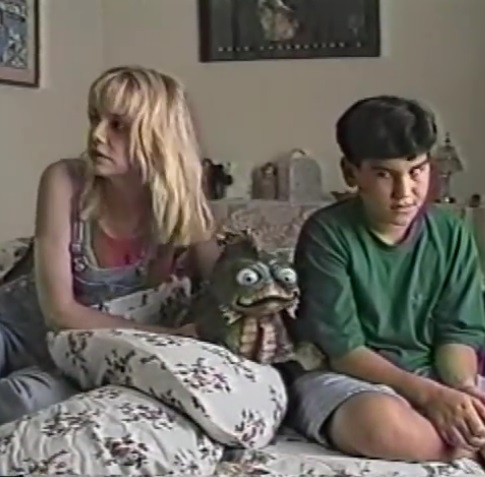 On the beach, a couple of kids discover the lost little sea serpent in a bubble. The detectives observe this from a distance. The sea monster is another one of Donald Jackson’s beloveds hand puppets, probably inspired from Mark Williams FX work, but executed without the budget or skill of a conventional production. It’s cute from the correct angles, but static with limited motion. The kids decide to take him home.

The titular little lost sea serpent objects to be calling a sea monster, and prefers the term “Sea Serpent”. The yippy little dog of the house doesn’t like the sea serpent. This makes it harder t okeep him hidden and the kids start wondering what to do with him.

They ask dad, played with relish by the ever present Joe Estevez, this time portraying a sleezy tabloid reporter. According to Estevez,  If anybody ever found out that someone had discovered a sea monster, the government will probably take it and cut it up. After hearing this the kids are more determined than ever to keep it a secret until they can

find a home for him. First order of business is to wash him in the bathtub. He escapes course and eats the mom’s goldfish. Honestly, this would be really cute and funny if the puppet wasn’t so ridiculously bad.

The kids have to flee with the sea serpent when his tabloid reporter father comes home, racing on bikes back to the beach with dad in the hot pursuit. There at the beach, they discover the little lost sea serpent’s giant (and even less convincing FX) mother in the water, searching for her baby and they reunite mother and child.

This film has all the production value f you local church puppet video, with cheesy sweetness that would make Full House look positively dystopian. It’s bizarre nightmare fuel for any child who may have laid eyes on it.

Somehow, Jackson would continue to make kids movies for another year until the money ran out.