Posting the best strips from the series, in order from the beginning.

Every Wednesday and Friday 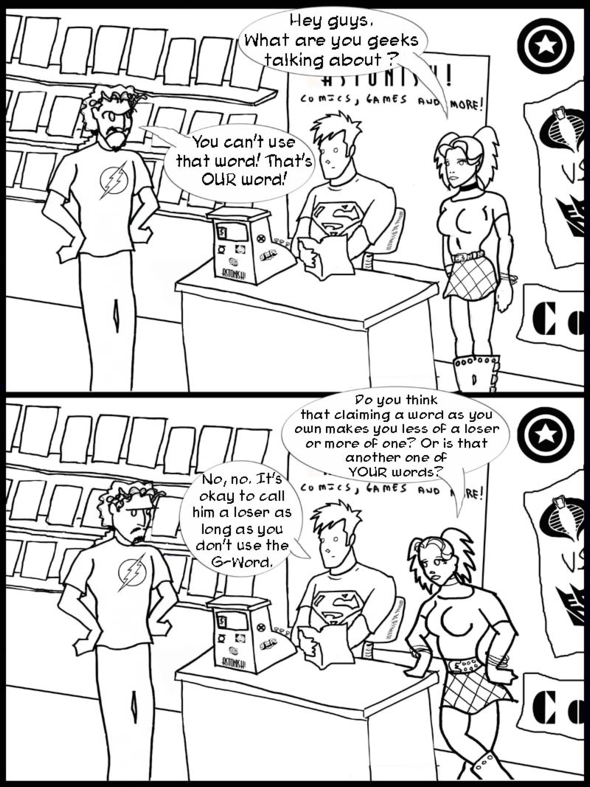 I don’t in fact, use that word. I’ve never under stood this “that’s our word” thing, and I have heard guys use that phrase with the term “Geek”. I don’t agree with that. I think it’s offensive in other situations as well, there are words that African Americans that’s apparently okay for them, but not if it’s used in a historical manner in Jango Unchained…Sorry, no. It’s just as vulgar and offensive coming from either mouth. You haven’t robbed a word of it’s p0wer, it hasn’t gotten watered down. It’s still used with hate from the people who look down on you.

If you want me to fix your computer (I went to school for that. It’s not a passion or hobby) then I suggest you don’t refer to me as a geek. Just because I read and write comics doesn’t make me like the term geek. If you’re calling me that I suspect I’m better read than you, because I can think of a dozen less offensive alternatives (and just as many unacceptable ones). I HATE the term “geek Culture” and the way we’ve tried to integrate it into our lexicon. I’m sorry, but I have no interest in salving the conscious of the cheerleaders, jocks, homecomnig queens and preps that now think the rows of consumer electronics are cool, like superhero movies now because they are blockbusters  and suddenly want tech support.

Even as we tell ourselves that the idea of “the Geek” is becoming mainstream, we’re still laughing at them, not with them. Just watch the Big Bang Theory. I’m not sure exactly why it has such a big fanboy following. You’re the butt of those jokes guys. You really are. The alcholic, promiscuious aspiring blinde actress is the one they portray as “normal”. Everyone else is just a joke.

My point is simple. Stop accepting it. Wether you’re into comics, electronics, science, ect. don’t call yourself a geek and don’t let others call you it. It’s not a badge of pride, it’s just a surrender to a society that has tried to drag you down, probably your entire life.