I’m assuming this is another kids comedy. You don’t always know, but Jackson IS using his real name in this film rather than his directorial pseudonym “Maximo T. Bird” and the cover art just screams Direct-to-video family film. It’s also an encouraging sign that Jackson is working off an actual script, penned by Mark Williams, a frequent collaborator of Jackson’s.

Baby Ghost starts off  in a studio located inside a bland L.A. office building with Joe Estevez as a photographer trying to convince a petulant tweenie to smile for his photos. It’s weird to see Joe Estevez in a Jackson role where he is not the villain, but you can definitely tell he’s a good guy by the goofy demeanor. It’s reinforced by the fact that he wears a bow tie.

On the lookout for a vending machine, one of the kids runs afoul of the overzealous security guard played by James D. Whitworth and heads to the basement to hide. while cowering in the dark, she finds a wooden box that has been chained up and padlocked.Of course all children are natural lock picks, and she figures out the combination easily but leaves the box behind with the psycho security guard shows up again and chases her back into another part of the office building. We pan back to the abandoned box vibrating violently, about to release its contents.

Upstairs, Joe Estevez’s character is questioning his life choices. At this point I wouldn’t be surprised if Estevez himself was doing the same thing after finding himself in another one of Donald Jackson’s films. Estevez calls a psychic hotline and the feminine vice on the other end identifies herself as being from “The Master of Light Institute”. If that name sounds familiar, it’s because it’s used frequently in Jackson’s Rollerblade movies as well (Shared universe? Oh man, I think my brain just cramped). Part of the gag here is that the psychic is looking up the meaning of the cards in a book as she reads them over the phone. In someone else’s hands this would be hilarious but with Jackson’s direction, it falls unfortunately flat. Also, I can’t help but notice that we are back to filming in Jackson’s office for this set (a pretty common method he would employ to keep costs down). Things turn dire though, as her reading seems to portend negative adventures in Estavez’s future. Apparently she works in the same building and as her own run-ins with the psycho security guard.

It’s about this time we get our first glimpse of the baby ghost. It’s a green hand puppet made somewhat transparent with a high 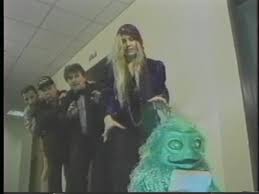 contrast dissolve overlay effect on the screen. I almost wonder if it’s actually the same puppet used in little lost city serpent and dressed with green moss. The face looks pretty much the same. Mark Williams worked on both films and his Hollywood background was largely in FX. He was even one of the creature effects crew in Aliens.

It’s a typical Jackson film puppet with very limited articulation and awkward movement. It giggles like a demented child and floods around the building, occasionally buzzing by people just enough to freak them out. It stops by the photographers studio to cut up his pictures with scissors and cause some general mischief, before he goes and chases the psychic through the halls of the building. She runs into Estevez , and the two meet face to face for the first time, discussing the merits of telephone tarot cards. The psychic pulls out one of her books so they can learn more about ghosts. They discover that the ghost cannot leave until it is banished or someone takes it out of its boundaries. This is obviously the exposition scene, because it goes on for ever. I can’t tell if they’re trying to be scared or comical. Estevez seems frightened, but the lighting is so flat that it does nothing for mood.

Did I mention the building manager is Conrad Brooks? He start’s to have his own close encounters with the ghost, though he’s convinced that it’s an alien rather than a ghost. It’s bizarre and amusing to hear him describe the plot of Plan Nine From Outer Space to the gung-ho security guard. As the talky exposition scene continues upstairs, we get periodic cuts to Brooks and the psycho security guard running from disembodied giggles.

In the basement, Estevez and the Psychic locate the box the ghost was trapped in, complete with instructions on how to capture him. The first try to lure the ghost out with a trail of donuts that leads back to the box. It almost works. Our little ghost is falling for the bait…..right up until the security guard and the Manager blunder in at exactly the wrong time and hilariously ruin the plan (well, hilariously in theory anyhow). The group resets the trap, this time luring the ghost down with a hand held video game. Apparently ghosts live video games because this tactic works and they trap him back into the box!

In all fairness, this film isn’t quite as mind boggling crazy as a lot of Jackson’s later efforts. It benefits from having a script to work off of instead of pure zen improv. However it still manages to be fairly weird and feels like it belongs on public access cable right after the local kid’s church show. It’s an okay idea that would benefit greatly from production values, acing and a MUCH BETTER PUPPET!