We open in a prison interview room. The orderly knows what’s up, even if the jerky prison psychiatrist doesn’t. Orderlies always know who the dangerous prisoners are.
It’s Christmas even and they are discussing the events of the last film. Flashbacks! A whole movie later and they’re still showing that initial murder again and again.This time however, it’s not Billy – after all, he was gunned down in the last movie. This time it’s his baby brother Ricky telling the tale (odd, I thought the killer had murdered the baby brother in the car since we never saw him again, even though according to this, he was supposedly at the same orphanage). The flashbacks, (punctuated by occasional inserts of Ricky and the therapist talking) take up a full forty minuets at the beginning of the film,and comprise nearly half of the movie. Fun fact, the sequence where Billy is peeping on the two people having sex in the back room is actually new footage. Contracts would not allow the re-use of this particular scene because of the nudity. It was shot with different actors on the couch in one of  the producer’s office to match the shots of billy on the other side of the door. Still, a good half of the film is repurposed.

It turns out the producers of Silent Night, Deadly Night wanted director Lee Harry to re-cut the first film and insert one or two new scenes with Eric Freeman playing a mental patient, to make the story in the original film appear to be nothing more than the ravings of an asylum inmate. The hope was to re-release the movie under a different name.  But screenwriters Lee Harry, Joseph H. Earle, Dennis Patterson and Lawrence Appelbaum, wrote short vignettes involving the patient’s youth, as he killed several people, and eventually the movie transformed into a sequel. There still wasn’t enough material for a full-length feature though, so all the flashback sequences from the first were added in.

With all of that re-used footage I still can’t believe this took 10 entire days. To make this more complicated, the reused footage presented a problem since it drove up the body count  significantly when the new kills were added. as a result, the kills had a good bit of their gore trimmed to get it past the MPAA.

Those 10 days of shooting go into Ricky’s story, and his life after being adopted out of the orphanage. In fact, there’s some clever merging of the two films, in particular after Billy is shot down. The camera pans up from the axe and they cut the pan into thier new actor for Ricky. He’s freaked out by Nuns, Santa and the color red in general. Ricky’s descent into homicidal mania take a similar path to his brother Billy’s, but feels purer – more intent on punishing people guilty of actual speech or acts he 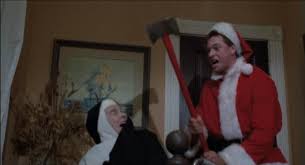 sees (at least until he gets a gun and snaps towards the end), rather than the generalized kill ’em all attitude Billy had (which only paid lip service to the idea of punishment). He’s more charismatic than his brother as well. Both were well built young men, but Ricky is chatty and sinister. It’s an interesting juxtaposition to the semi-catatonic state that Billy walked around the first movie in. Certainly more charming enough to attract a girlfriend. She decided to take him to a movie where the killer dresses up like Santa (and is inexplicably made up of shots from the first movie). This triggers the rampage that lands him in jail.

It’s actually a bit convoluted for a movie of this type and disappointingly enough, the Santa suit doesn’t actually put in an appearance until about 15 minuets from the end though it and the appearance of a desiccated Mother Superior (technically the same character, but played by a different actress – the scars are to help hide that fact) are worth waiting for. That, combined with the excessive amount of reused footage leaves us with a seriously uneven film. However, I could see myself returning to this for the same reason I dig trailer compilations It’s multiple films in one really, without the burden of being an anthology.