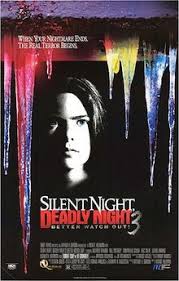 Part three starts out pretty nicely with a Terry Ferrell look alike seemingly lying dead in a white room. No, not dead, she wakes up and finds someone on a slab with their brain exposed in a dome…then a killer Santa. Yeah, this is a good way to start things off. It’s only a dream, during a sleep study, but it sets a creepier tone than your average slasher, which up until now, these things have been. Other good signs involve Robert Culp and Bill Mosely in the credits.

Of course just as it gets good, she wakes up, but the doctors put her right back down. The next dream is the beginning of the the first Silent Night Deadly Night (again? How many times can they re-use that footage???) Brain boy is in the next room, and his chart lists him as Ricky Cauldwell – that is to say, the boy turned killer from the second movie. I’m not sure how he came to be here in a coma six years after being gunned down in a hail of bullets, but here he is and apparently our ingenue, Laura, has some sort of psychic connection to him. It’s okay, it’s cool. The best entries of horror franchises frequently involve evil 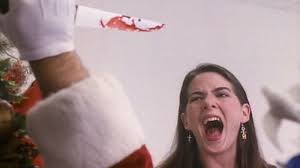 doctors or psychiatrists, like in Nightmare on Elm Street 3 or Hellraiser 2.

The doctor thinks the Blind Laura is holding out on him and she wants to quit the experiment. As she leaves, we get some foreshadowing that her abilities may be not only telepathic, but premonition.

In the meantime, a drunk Santa is finishing his rounds at the hospital and stumbles into Ricky’s room. His mocking presence is enough to draw Ricky out of his coma, and into a murderous rage. Somehow the dude with the exposed brain manages to thumb a ride into town. 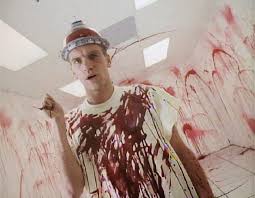 Ricky by the way, is played by Bill Mosely. When Robert Culp’s detective character arrives at the hospital, he discovers they reconstructed Ricky, jump starting his brain and even his memory. Culp (playing much the same character he did in the Greatest American Hero and stealing every scene he’s in) is none to pleases since he was the one who took Ricky down.

Down the road a bit, Ricky has acquired a hat to cover his brain box and found his way inexplicably to Laura’s granny’s house. Contrived as it may be, you know this isn’t going to end well.

With the hospital murders and references like “Maybe the boogeyman got her” and the Doctor /Detective duo hunting the killer, I actually get a sort of Halloween vibe from this film. As much as I like the brainboy look and love the fact that they are still trying that hard to connect the films to some sort of continuity, I do miss the Santa suit on the killer. It doesn’t quite feel Christmassy enough, and the film itself drags. It’s entertaining as part of a series, but it’s too weak to stand on it’s own and that’s a shame. There’s some really good potential here. If they’d upped the creep factor with the psychic premonitions and done some FX work on things like the ghost and the killer as well as adding some better gore this could really be something. They must have though so to because for the next two entries, they contracted the services of Screamin’ Mad George to give them some blood and effects.  On to part four….