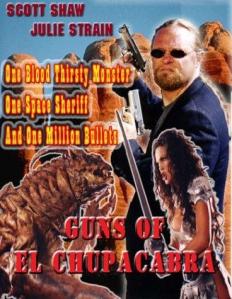 I realize going in that the Guns of El Chupacabra is a zen film, but billing it as part of “Zen dance”? Really? We haven’t even gotten into the movie and I’m already aghast.

Moreover, are we just opening this thing with outtakes of Julie Strain from the devils pet (aka Queen of the Lost Island)? Because those smokey shots of her with a sword really looks like it (It’s three years later, so likely not. Perhaps it’s just that so many of the Shaw/Jackson collaborations all look the same).

Barbarian Strain battles against some evil looking creature in purple smoke in a climatic battle…that all ends up just being a dream. She is still in the warrior fetish gear though, so we know it’s going to be a hard Sci-fi romp. Particularly when Strain tells her husband “Send for the Space Sheriff”.

And we’re only one minute in.

According to the space queen, the evil one has unleashed the Chupacabra on Earth and Shaw must go and set things right. In return, She and the Space King will make him into an action hero, with his own franchise!
“Is that good?” Shaw asks.
“It worked for me!” The king winks.

When he arrives there will be angels and demons to guide him, but beware…sometimes there are one in the same(I see were quoting from Shaw’s books again). They hand him his cosmic samurai sword which is how you know were definitely in Jacksonville. The credits feature all the usual suspects, Robert Z’Dar, Conrad Brooks, Joe Estevez and Julie Strain.

In the desert, Conrad searches for something but it appears the Chupacabra is after him. Next we’re treated to rednecks, truck driving and what looks like a gun deal.

Elsewhere, Conrad Brooks is just waiting to meet Scott shortly as he arrives in his space man Porsche.

Enter, bride of the monster.

Two spacemen bring the Chupacabra a female victim, and holy crap, the Chupacabra looks great! That is a sick monster suit, although it should be covered in ultraslime and filmed at night (Something Jackson flat out said he didn’t want to do. He wanted it in the full light to show off the suit) nevertheless, it’s way better than anything I expected.It turns out, the suit itself was built for a completely different movie that Jackson’s financier had backed. The film had been shelved and it was consigned to storage, never to be seen again until Jackson got wind of it and convinced her to loan it out to him.

Did I mention that the girl in the cage is screaming “I am not an animal!” ? 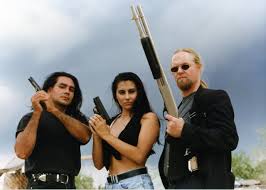 Shaw visits the local gun runner to buy shotguns out of his trunk. We cut back to The rednecks, searching for something in the woods and then back to Shaw with his allies testing out their guns for no apparent reason. There would be a lot of this due to the location Jackson and Shaw had secured

“A friend of Don’s, Bob Mizrahi, was living at this great ranch north of L.A. I am told that it was originally owned by Hoyt Axton. The great thing about this ranch was that not only was it secluded but it had hills surrounding the property. From this, we could fire live ammo, (of which a lot was shot during filming), with no worry of stray bullets traveling onto other people’s property.”

They exploited this to it’s fullest. Not to it’s most effective (By staging exciting gunfights), merely to it’s fullest (Just shooting lots of guns off screen). I don’t think these guys quite understand action. Dynamic shots and shooting guns is great, but you actually have to have a target, and perhaps some peril for it to mean anything. They kind of blew it off as being the attack of the invisible Chupacabra. No, seriously. There is an actual title card that reads “Attack of the Invisible Chupacabra”

In the back woods, “High Noon Newz” investigates the legend of the Chupacabra and the local livestock deaths where the animals have been attacked but there’s no blood. Back to the rednecks. I’m still waiting for them to have something to actually do.

Elsewhere, the FBI camp out in a car. One agent explains that every nation in the world has engaged in genetic experimentation. It’s always been trial and error, and apparently the Chupacabras are the errors. I’m grateful for the explanation. It’s more than we usually get.

We cut to a bit where Scott Shah meets a date after a brief kung fu fighting on the roof of the building. He takes her on an elevator ride and they cross Jackson’s stock bridge (Seen in Rb7 and Toad Warrior to name just a couple).

Meanwhile, back on the unnamed planet the film started on, the love ritual begins. (At least that’s what the captions tell us). Like most sex scenes in Jackson films, it doesn’t actually show any notable skin and lasts less than 90 seconds.

Finally, we are introduced to the Evil one… that is to say, Robert Z’Dar. He’s been here for several hundred years and is obviously the villain of the piece. He’s upset with his minions (Who just happened to be the rednecks, but some of them wear masks) because they’ve let his pets run out of control and command them to go gather them up and bring them back to him.

Elsewhere, Scott Shaw finds another ninja on the rooftop. I’m confused now because that’s far, I’ve seen more ninjas and rednecks and I have actual Chupacabras. There is 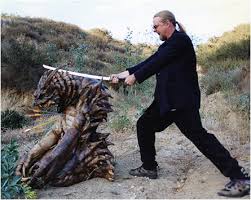 I don’t know where, but Joe Estevez shows up in a Texas Rocket Ranger costume from Return To Frogtown, and starts to vamp. I almost wonder if this was shot for different film and just ended up in here to pad the runtime. Usually they do that with random nudity but this actually doesn’t have a ton of breasts in it. Scott Shaw writes in his memoirs that Estevez’s role was intentional and done for this movie as a sort of Narrator. I’m not convinced. Jackson was filming multiple movies over the year that this thing took to shoot and Estevez’s rants have only the most tangential connection to the film he’s actually in.

We head back to the girl in the cage (the one that was brought for the Chupacbra. Where’d he go any how?). She’s rescued by the luchadore masked “Santiago kid”. Shaw arrives, suspicious and with gun drawn. It’s a stand off, but to avoid conflict, the Santiago kid transfers custody of the girl to Shaw and they flee. Cut to more girls in cages being managed by the Chupacabra and a Grey Alien while the Santiago kid gets interviewed on 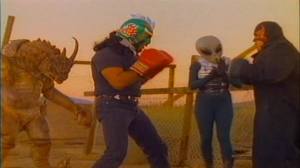 the news… and then gets lucky. That, in between cuts of him in a boxing match with another Luchadore while the Chupacabra and Grey Alien look on.

The next thing we know, Shaw is back on the run with the reporter and they’re being hunted by Z’Dar’s minions. Gunfights and a quick Mele with the Chupacabra ensue.

Suddenly we find out it looks like it was all just a film being made. Seriously. We pull back to reveal Jackson and crew shooting the movie, with the conclusion being given to us by Joe Estevez and his amazing rocket pack. I’m confused by all of this too. Jackson once said of “The Guns of El Chupacabra” “The point was to present, as in all the other films Scott and I have created, that good overcomes evil. That the world is a spiritual place.” shifting to this meta ending seems to undermine this his message of “Be good, be spiritual, be happy, have some fun, and you will be victorious and some good things will

The film is clearly over at this point, but the problem is, it dosen’t actually stop. We now move on to general wackiness, with the director and the star bickering and on unused footage.Where did he even get that bow and arrow that he shoots the Chupacabra with? (Fun fact: This entire scene was designed to damage the costume enough that it wouldn’t be able to be used in any other movie when Jackson returned it) And isn’t the samurai sword to the head of the Chupacabra little overkill afterwards? Do these guys not know how to leave anything on the cutting room floor? I mean, they’re not treating them like outtakes – they really should, that will be fine. Fun even. But no, this is still hardcoded right into the movie, pre-credits.

This is one of those kind of films that I think would probably be a lot more fun if one was drunk or stoned. It certainly can’t make it any weirder.