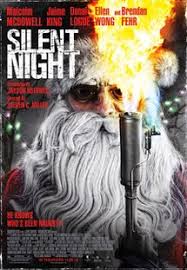 A soft reboot, Silent Night is slick and filtered and modern with a cool twist on the Santa killer appearance – a clear plastic mask with a beard glued on. Not as over the top as the zombie Santa killer of the fan films, but still creepily effective, enhancing an explosive first kill. We swing over to Malcolm McDowell as a police chief on the phone with a local cop as she does the crossword. We get some squabbling between the cops, the usual getting to know you routine as Christmas comes to the small town, right out of a Hallmark movie. This particular remake was inspired not only by Silent night Deadly Night, but also by the real-life Covina Holiday Massacre which took place on Christmas Eve in 2008.As such, it’s not Billy or Ricky who are the killers, but rather a spurned lover from an urban legend (we get the backstory around fifty minuets in – I 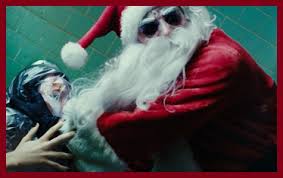 kind of needed it sooner).

Donald Logue plays the worst Santa ever, plying his trade on a street corner and for a moment I thought I was in a Bad Santa movie. But 21 minuets in, we get a homage to the catatonic grandfather in the original and it’s twice as terrifying.

The violence itself begins slowly, but just as I was beginning to despair, a leg comes off and out comes the wood chipper. Also, apparently a flamethrower beats a gun. Good to know.  It’s gratifying to see an homage to the Linnea Quigley kill from the original (the one involving a set of deer horns) later on. While this film tries to be it’s own entity, it is very aware of the legacy it continues. It’s the simple things like the Santa killer RUNNING full tilt at his victim. We’re so used to  seeing these traditional characters like Jason or Michael just walk, relentlessly (and some how still catch up with you) and when we see something like the familiar Santa killer racing towards you, it somehow feels innovative. 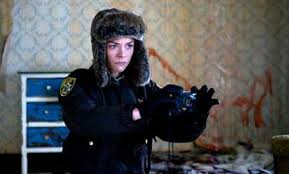 The film itself is light on story, and is honestly the vapid slasher that everyone thinks the originals are. Rather than being about the killer and his trauma, this movie spends its time focusing more on the detective and her insecurities. It’s suggested that her father once had to take down an evil Santa himself, and we get a reference to a previous Santa killer four years prior in another town, but they never come out and say if it’s the killers from the original, preferring to maintain a nebulous, peripheral connection to the source material.

Overall, it’s a good, bloody slasher that can hold it’s head high amoungst other holiday themed horror and while not enough to reignite the franchise, still serves to round it out nicely.