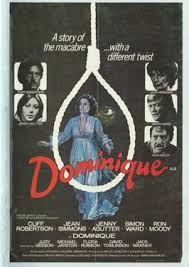 Dominique is dead it’s one of those movies that’s full of people that I feel like I should at least be peripherally familiar with, folks like Simon Ward and Jenny Agutter and Cliff Robertson. It starts off on the eve of dinner party, with the wealthy couple that are obviously having friction. The husband just fired the chauffeur and the wife is in a generally bad humor.

That evening, the wife, Dominique is depressed and scared and pleads with the new chauffeur driver to help her, but he’s just kind of weirded out by it and sends her back off to her room. She plays piano a lot. Her husband wakes up, and heads out to the patio to find her hung by a noose in a blue moonlight.

Watch Check; we’re nearly a full half hour into this thing! This chick better start haunting us, and quick like!

Husband comes home, lights a cigar and sits back, very satisfied. He does a quick check of the house before heading to bed and just stares at the piano. I’ve got a bad feeling about that piano. 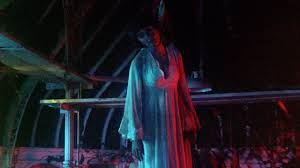 The next day, a gravestone is delivered to the cemetery… It’s a gravestone with his name and the date of death is… Soon. He tracks down the manufacture, who talks about it being ordered by a woman in black, and said she was a mourning for her husband. She paid cash so there’s no trace, but when the husband comes home the piano is playing by itself and distant echoing footsteps ring out through the gloom of the house. Indeed, there is a figure and black walking through the halls, figure that disappears just as swiftly as it manifested.

Over the next day or two similar events occur, and it’s enough to send the husband after the cemetery to dig up the grave and discover whether or not his wife is truly Dead. Dead or alive, the grave is empty. 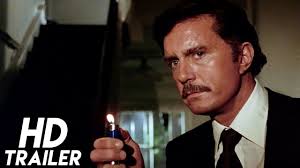 Soon, the grave has a death date etched in its stone surface, and that date is tomorrow. The piano place itself as the husband rises from sleep with a gun in his hand and stocks the house, shooting at the ever present spectral figure. The bullets miss of course and the driver comes out to find out what’s wrong. Wracked with guilt, the husband admits he drove Dominique to her death, then fires the chauffeur.

I don’t think I will spoil the ending here, because this is a genuinely good film that I’d really like you to seek out and watch. I’ve noticed it in several places, not the least of which is YouTube.
The thing is, the movie is so understated that there are times when I could almost mistake this for a TV movie. It’s not, it’s just the way things looked in 1979 when you’re dealing with this sort of Gothic thriller, but despite the sometimes slow and sometimes flat delivery, it’s a masterful mix of classic mystery and ghostly horror. They get the mix just right, and managed to keep up a sense of dread through a lot of the movie. The trick is to get past that slow first half hour, because the last 2/3 of this film are stellar.

This entry was posted on February 16, 2021 by mathias42. It was filed under Evil Spirits, Horror, Horror Movies, movies, The Box Set Project, Uncategorized and was tagged with Dominique is Dead.