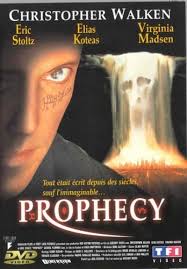 The first time I saw the Prophecy I don’t remember much the film itself, but rather just being really impressed with the idea of hidden scripture in Revelation. I remember being intrigued by the idea of Chris Walken’s angel, and didn’t really know the rest of the cast… Of course now, Viggo Mortensen is a household name due to Lord of the Rings and I’m a huge fan of Amanda Plummer, not only from Pulp Fiction or the World According to Garp, but also from The Fisher King – one of my top five all time favorite films. More importantly though, this is a story by Gregory Widen – you know, the dude who wrote Highlander? Virginia Madsen is also her, but it’s 1995. It’d be easier to list the few movies she WASN’T in during this period (though to be fair, this is only her second horror film, following Candyman). Overall, it’s enough to make me really look forward to this. It’s a great concept, some people lose their faith because Heaven shows them too little, while others lose their faith because heaven shows them too much.

The story begins with the ordination of a priest who trembles at visions of angels falling. This man, Thomas,  leaves his priesthood to become a cop instead.

He wanders into his apartment, and finds an angel there, Simon, played by Eric Stoltz , perched on a chair and perusing his books.

“I know you, I know why you left your faith on that floor.”

The angels been reading his thesis, curious if Thomas still believes, or at least thinks he still part of God’s plan.

Outside, Something is arriving. More angels who perch objects and sniff the air as they hunt their prey. Suddenly, the angel is it a Thomas went himself in battle with another one, gouging on his eyes and throw him out the window. It’s this crime scene that Thomas comes upon, a gory face and a blood spattered apartment, brilliantly shocking.

Elsewhere, Virginia Madsen conducts a school choir near an old church. An old soldier is being laid to rest there, and the angel Simon comes by to spirit away his soul, to carry it and hide it somewhere else.

We’re about 20 minutes in before the story really picks up – the book with the extra chapters of Revelation show up in the morgue and we see Steve Hytner for the first time. You might know him better from his recurring role as Kenny Bania on Seinfeld. He’d be a regular in  these movies, apearing all the way through the initial trilogy. He’s introduced as Joseph (but we’re still ging t call him Bania, because….come on), explaining the unusual anatomy of an angel – no growth rings on the bones, no optical fibres in the eyes, things like that. Our main character, a Priest trying to take the text back home to study,  is where we finally got our first glance of Christopher Walken. Walken

looks different here – his slicked back black hair looks dyed and unhealthy, and his friend seems emaciated with unhealthy looking skin. (you might be able to associate that with some of this to events like the one Viggo Morgensen relates, about Walken eating garlic cloves before shooting there seems together ). There is more care taken to make him look otherworldly in this gone then they would ever give to the sequels. still, his swagger works – the way he can make a person faint dead away, or sniffs and smels and even licks debris while he’s huntng or causes a dead body to burst into flames. The clinical detachment and determination which is a interesting contrast to Eric Stoltz character who seems to care about everything and that’s a great job of showing the uniqueness of each angel. It’s still stunt casting, but there’s something about Walkin that only he could really get away with the whole, the whole hunting by smell pantomime. Watching the way angels perch on things, it still feels fresh here – I remember it being innovative, whereas by the later sequels it would just feel tired.

Simon for his part, is hiding in the school… In an abandoned area where he runs into a young girl named Mary. She’s one of Virginia Madsen students, and Simon hides the soul in her.

Walken’s Angel has a minion, Who he’s leaning on help him grab some of of Thomas, something that will help him in his search for Simon. Meanwhile, he’s off to torch the other angel’s body, because we don’t want any evidence of what’s going on here. This is where we start to get The text Thomas has, a lost chapter of the Bible that describes a second war in heaven.

The Angel and his minion are off to the desert… You can see the contempt Walkin has for humans in the way he talks to him and when he discovers the soul has been taken from the body he is enraged. Simon managed to pass the soul on just in time though, because Walkin finds him next, and it’s Simon’s turn to burn .

Meanwhile, Thomas’s investigation leads him out to the school where he meets Madsen who is still caring for Mary… Now sick from the strain of having to hold to souls in her. She draws his memories in crayon and dreams of the dead soldier, describing the way Japenese men bleed in the cold. As Walkin’s Gabriel gets closer, Thomas finds himself as the only protector she and Madsen have. 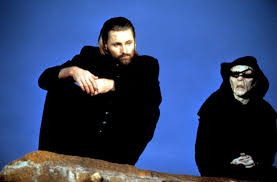 We are about halfway through the movie when we get the plot – there is still war in heaven, and affection of angels are jealous that God loves humans and not them. It’s the same basic elements that we would get in every other sequel, but it’s never done better than in this first film. I know, big surprise – the original film is superior to all the sequels, but to be fair – that’s not always true. A lot of times the real mythology of a series, its heart, shows up on the second or third film (fr instance, we never hear about Ash working at “S” mart until the third Evild Dead movie. We don’t get Jason’s hockey mask until the third Friday movie. Heck, Luke dosen’t even find out Darth Vader is is father until the second Star Wars movie…..spoiler alert by the way). Not so here, the Prophecy is born with it’s lore and mythos fully realized. Its engaging and original, but only once. Despite being one of those typical 90s horror movies with no blood, latex, or monsters, it surprisingly stands up to the test of time and ended up being a much better film than what I was expecting with shocking number of familiar faces.