I haven’t done a TV blog in weeks because first off, Superman and Lois is on hiatus. The Flash has been solid. Good stuff, nothing extraordinary,… Just a good solid average TV week in and week out. Remember when television was like that? Of course it’s taking a few weeks off too. Falcon and the Winter Soldier actually started out in that same mold, solid entertainment, but then got a little more woke than I prefer towards the end. So all in all, I haven’t had much to talk about. I’ve been seeking elsewhere for my television entertainment. 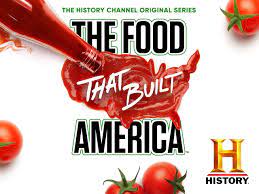 The Food That Built America has come on my radar with a vengeance. It’s a documentary series on the history channel and in it’s second season, that has absolutely shocking marvelous stories about very familiar food. Nathan‘s hotdogs, white castle, Hershey, but the one that really pushed me over the edge and made me a devotee was the McDonald’s versus Burger King episode. See, if you watched Michael Keaton in The Founder, you know how McDonald’s started, but this episode really tells the second part of the story – how it expanded and the birth of the Big Mac as a reaction to Burger king’s Whopper. You get some amazing insights as to both McDonald’s and Burger King, moreover, it’s fascinating to see the development of such familiar comfort food as white castle, and hotdogs in general. Hershey’s Chocolate and all sorts of other things that just seem a part of normal every every day life. Seriously, I’m riveted.

The other television I’m obsessing over is the Big Bad B Movie Show. That one may take some explaining.

The Big Bad B Movie Show is a horror host show, much like Elvira or Svengoolie on MeTV. There was a time when every city had their own unique horror host. It’s an art that’s slowly fading away, but in Cleveland, we don’t let go of things quite so easily. We had Big Chuck and Lil John right up through the 90s, and there’s something in the water here that grows horror hosts at a faster rate than any other state in the union. So the newest crop are Leopold and Lenora… And they’re brilliant. The most significant thing about Leopold and Lenora, is that they’ve found a fairly original formula to do the whole horror host thing with, and that’s no mean trick. Leopold is a hipster doofus, and Lenora is a glam airhead counterpart. They’re both brilliant and hilarious. I’ve watched sketches that involve terrible children shows… “So kids, come on let’s start with grabbing the kitchen knife!” And Gwar as a personal injury firm, as well as terrible horror scopes, parodies on the purge, and the worst imitation of Vincent Price I’ve ever seen. It’s all glorious. If I have any complaint, it’s that they also incorporate other local (Somewhat opportunistic) horror hosts the mummy in the monkey, eating up one hosting segment that would be better served by Leopold and Lenora. Nevertheless, the big bad B-movie show is easily one of the best horror host shows in decades… And I should know. I am a bit of a horror host groupie, and yet I can’t sing the praises the show enough. I’m enjoying every second of it.

Well, perhaps not every second of it, they are still stuck with public domain films… Which means they’re showing the same set of movies that every other Internet horror host Joe’s. It’s really the one weakness of the series, but on the other hand, I don’t mind watching Robot Monster and the Last Man on Earth quite so much with these companions to join me. You can watch Leopold and Lenora on the Channel 19 news app, available on fire stick… Or do a web search for WUAB TV Cleveland, and you’re sure to find The Big Bad B Movie Show. It’s absolutely worth your time, and is now the highlight of my week.