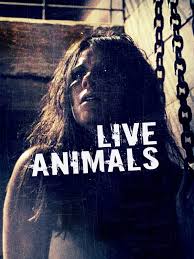 Live animals starts with the radio report of a missing girl in a rural area as a rancher picks up the feed for his animals. We shift to young people at a bonfire, somebody cloaked in darkness taking photos of them from the car. As the couples break apart from the group to go get busy, we see hands grabbing equipment – a gun, drug darts and needles – and a creepy rubber mask… Oh I’m so happy! These kind of movies are always more interesting when we have a creepy masked killer rather than just some dude walking around with an axe or something! The night atmosphere is beautifully lit, dark with just enough light to make out characters and details but will be enough to create dread. Despite the gun, the killer has the rough and deliberate movement that you see in Jason Vorhees. His murderous rampage makes for a surprisingly long opening sequence, eating up well over 15 minutes at the beginning of this 84 minute film. 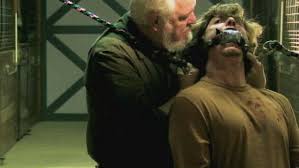 Things don’t let up though, we had back to the psycho’s place to find people chained up in the stable. He announces that they are all his property now, and that just like a horse, they need to be… broken. We spent the next 20 minutes watching them be tortured and abused, and then a car pulls up to the stable; A prospective buyer. The unlucky girl chosen, is created up in a wooden box and shipped out.

should be grateful that the rapey parts are merely suggested, but all in all the films a drag and I’m not digging this one. I ended up watching the last third of this on fast forward because there’s not really enough dialogue to make a difference. Indeed, I almost wonder if this was a case of the filmmakers having a location –  the stable – and then because they have a location they build a story around it . I almost wonder if this would’ve been better off as a short, there doesn’t feel like there’s enough for to really be a full feature. In any event, it really doesn’t work for me – even with the attempt at a slight twist ending . It may be the first real misfire in this set. Not a big recommend.

This entry was posted on May 6, 2021 by mathias42. It was filed under Masters of Terror Vol. 4, The Box Set Project, Uncategorized and was tagged with Live Animals.