He-Man and the Masters of the Universe

We didn’t talk about Masters of the Universe Revelation on this blog because it probably would’ve been just 1200 words of me griping and moaning about how #KevinSmithLied, and how trying to deconstruct a heroic and pure character like He-Man…or for that matter, Superman or The Lone Ranger, that sort of deconstruction never really works. Even in the Dolph Lundgren film, where things were grittier and more violent and darker, He Man is still pure. He’s still heroic. He’s not haunted and troubled and angsty. Even worse, he’s not actually in Revelation. Oh sure, he shows up for perhaps two minutes an episode in flashbacks (I know, I timed it), but he’s not actually part of the show. Rather it’s Teela that’s the main character… A subject that has been covered endlessly and far better on far better channels and blogs than mine. But really, did they have to make her such a aunt towards everyone she encounters? (Wait, did auto-correct just… Never mind.)

Netflix’s new He-Man and the Masters of the Universe makes none of these mistakes. This is an ensemble piece, with characters that are genuinely likable. Strong female characters that don’t have to tear down the men to be strong, strong male characters that don’t have to disrespect the women to be strong. It’s actually good stuff. Pure heroics, good and evil. The real hook here is that they flipped the script. Masters of the Universe has always been a heavy fantasy-based adventure with dashes of sci-fi in it. This however, is heavy sci-fi with dashes of fantasy in it. And it works. It genuinely does. It’s everything that I wish the ill-fated 1990s New Adventures of He-Man was.

Because it’s current year, they have to do some race and gender swapping, but because this is genuinely something completely new, I find that it’s not bothering me nearly as much as usual. Teela is a dark skinned girl with white hair, and not related to man at arms. They’re both young… Everybody’s young. She’s already a sorceress, so we’re kind of short cutting her legacy and plunging her right into it, redefining the character in a different role in this sci-fi technoscape. Ram Man has been gender swapped to be Ram Ma’am. It’s the dumbest name and drew the most ridicule during commercials, as well it deserved. However, this character is so well thought out, she 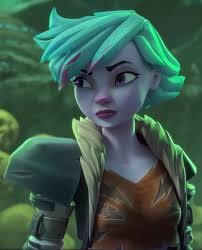 gets more backstory and depth than poor old Rammy ever did. It’s impossible not to like her. Krass (I swear I thought the name was CRASH -and it SHOULD HAVE BEEN! Seems more appropriate) may actually be my favorite character of this reboot.

Cringer has a new role here as well. Because we don’t have man at arms available to be the wise old mentor, that role has actually been passed on to Cringer. It’s a dramatic departure from what we’ve seen before but, they actually give us an interesting backstory for him, why he has that name, and a real reason for his aspirations to hunt and fight. It has every bit the depth and emotion that Revelation promised, without the whining and angst.

The other big criticism I saw the series was that Orko is now a robot. And that’s true… Sort of. Robots are common in the society ( technology is just a fact of their existence. Almost Star Wars in the matter of fact attitude they have towards it). The little floaty guys are everywhere. Orko is a re-programmed bot who has been input with the memories of the Trollan sorcerer Orko The Great. So now he thinks he is Orko the great… And part of his journey is learning that this isn’t his real identity, as well as figuring out who he actually is. He’s still the comic relie

f, and he’s quite adorable. I was never one of those that hated him, and this new incarnation is more fun than it has a right to be. It fits into the series, rather than just being dropped in for no reason. There’s a build up and a real journey here. Don’t expect to see him until about halfway through. In fact, don’t expect to see any of the villains in full garb until well past halfway through. There is a real story arc here, despite being episodic. The entire series is very much a learning curve story, something I’ve always enjoyed. This whole thing is a slow build up with constant cliffhangers that left me seizing the remote to furiously hit the next episode button – which led me to binge it in two days. Two nice and easy morning sessions, about two hours each. At 10 episodes it’s easy enough to get through, and absolutely left me wanting more. This sort of reboot is not only what I wished new adventures had been, it’s the sort of reboot I wished Princesses of Power would’ve been. I set my 15-year-old down to watch it with me on our weekly television night. She and her sister grew up watching the 80s He-Man and She-Ra on DVD with me, as well as playing with the toys. She knows the series, and while she’s not quite as invested as I am, if the producers were doing it wrong,  it’d be just as likely to piss her off as it is me.

Teela just fasciantes her and she absolutely loves the alternate costume. Krass keeps throwing out lines that she insists need to be motivational posters . (“Every problem can be solved by ramming them with my helmet!”). Neither of us can get the theme song out of our heads. She wants more, and so do I. I had planned on passing on the action figures… I’m not a huge fan of the distorted character design, but it sort of melts away as I watched the series, and now that I’ve finished it, I need every one of these toys. Seriously, I need a second season, and quick. Please Netflix more of this. More He-Man and the Masters of the universe, and less Revelation ( #kevinsmithlied ). I’m totally ready for a new adventure.