Man, remember ten years ago when i wold do these kind of “this week’s pulls” fairly regularly? The thing is, I don’t read a lot of new comics. New 52 REALLY broke the habit and comics have been in a sort of slow decline. But there’s DECADES of back issues and fifty cent/dollar bins out there for me to keep feeding the habit….

I got my dates mixed up. CnJ’s big indie sale was LAST week. But while I was out there, I figured I’d hit the recent release racks and fill my

alliteration quota at the same time.

I’d been eagerly awaiting Batman 89, and then completely forgot about it. While I was at it, I picked up superman 78… even though I’m not a huge fan of the Christopher Reeve movies, (yes, I know that’s sacrilege). Nevertheless, playing around in these movie continuities seems like a really interesting idea and I wanted to explore them. Then, my jaw dropped. Ambush bug was on the cover of Suicide Squad. Ambush Bug! I love Aambush Bug. He’s underused (then again, that may be a blessing. Once Marvel started doing more and more Slapstick stories, they completely lost what was funny about the character in the first place) but I think his two mini series back in the 80s are some of the funniest stuff DC has ever put out. He pops up from time to time nowadays, sometimes it works and sometimes it doesn’t. His appearance of new 52 was amazing. Ambush Bug year none on the other hand, was less than triumphant. 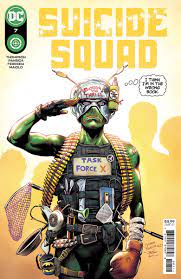 I like Suicide Squad, I really do. And I feel like the title is starting to get back on track what with the new movie out. It went wild in bizarre directions for a little while there, and while nothing will ever top the 80s Ostrander run, this isn’t terrible stuff. Ambush Bug is really weird here in issues #7 and #8. He’s goofy, but not quite as wacky as usual. Still, the fourth wall jokes all land, and the fact that he keeps changing costume and dressing up like the various squad characters… To see him in a Captain Boomerang costume and then a Harley Quinn one… It’s absolutely worth the price of admission.

Batman 89 on the other hand, I’m shocked that I’m so underwhelmed. I don’t understand when exactly this movie supposed to be. They’ve got Michael Keaton looking old here. White streaks on his temples like Mr. Fantastic, and it just doesn’t line up. The haircut’s weird. Michael Gough’s Alfred has a mustache and Commissioner Gordon is just a bit more fit. Still big, but that sort of 50s barrel chest big instead of Pat Hingle beer belly big. It all just feels off. 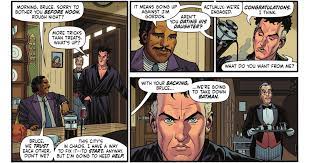 e do have to congratulate them though, they are doing the thing we all wanted, giving us more of Billy Dee Williams Harvey Dent. We’re definitely going to see him transform into his version of Two Face, and that’s got me holding on. And they’re also trying to introduce a Robin… this is one of the things I’d like to know more about. Is this supposed to be the Robin Chris Rock was up for? Because they’re calling him Drake… Tim Drake wasn’t Around yet in 1989. Certainly not as Robin. And it’s a weird costume. I’d like to know what it was influenced from.

All in all, I’m not sure I’m into this. We’re only two issues in, but it’s just too flat and too off for me. If you promise me Batman 89, I want everything to look like Batman 89. It’s a high bar.

Superman 78 on the other hand, I can’t believe how much I love this book!

As I’ve stated previously, I’m not a huge fan of the Donner films. I don’t dislike them per se, but the gawky bumbling Clark Kent, and the chain-smoking, raspy voice Lois Lane do nothing for me. In fact, I remember liking parts three and four better because Clark got different love interests that actually cared about who he was! Things were going that direction in the comics at that time as well… With Superman and Lois Lane breaking off their long standing romance, while an adult Lana Lang, Clark’s co-anchor at WGBS, was starting to take notice an interest in him. I really enjoyed them exploring that towards the end of the pre-crisis run.

That may be what really charms me about these comics. It’s not so much that they feel like the Donner movies, as much as it is they feel

like Superman comics in the late 70’s And early 80s. I’m very much a post crisis John Byrne, Jerry Ordway kind of guy, but I do have a certain nostalgia for those old days. There’s something fun about them, fun about seeing Lex Luthor as a chubby evil doer, and throwing back to a time when they actually had Brainiac well defined a knew what to do with him.

Superman 78 sees Brainiac coming to earth to collect the last Kryptonian to store him in the bottle of Kandor. It’s a perfectly straightforward set up, and gives us an excuse to visit with Marlon Brando as well as Gene Hackman, Jackie Cooper, Margot Kidder, Marc McClure and Christopher Reeve. They manage to sneak in the skeletal super powers version of Brainiac as well, and the whole thing just works. It hangs together, and pulls at the nostalgia heartstrings just perfectly. And they manage to do it all without any politics, social justice or any of the other drags that so anchor down to many modern comics. I am absolutely following Superman 78 all the way.

By the way, speaking of avoiding a lot of those things that dragmodern comics down, is anybody watching Star Trek Prodigy?

Seriously. I think He-Man gave me some renewed hope for some of these “kid” Versions of the series, so I sat down and gave this thing a try.

It’s not trying to be cynical or deconstruct anything, in fact I don’t even know what time period this is taking place in. We’re not necessarily bound by the non-confrontational and optimistic nature of humanity at the time, because we’re not dealing with humanity. It’s a rogue group of aliens who have discovered a lost starship and are learning how to fly it. Yet we still get the optimistic hopeful evolution of humanity in the holographic representation of Katherine Janeway. She feels very Star Trek. In fact, it almost feels like she is there on the bridge with these guys, trying to steer them into becoming Star Trek… I mean Starfleet. The whole thing is absolutely the most enjoyable Star Trek I have watched since the license was handed over to Bad Robot and Secret Hideout. Once again, the show is fairly devoid of social agenda and identity politics, opting instead for an interesting adventure, with moments that are adorable and other moments that are absolute punch the air events. We’ll talk more about this I think, once I get around to catching up on Stargirl again and doing a proper TV post!

Still, the comics thing was fun. We should do this again.

This entry was posted on November 15, 2021 by mathias42. It was filed under Comic Books, Comic Bookshelf and was tagged with Ambush Bug, batman 89, Star Trek Prodigy, Suicide Squad, Superman 78.