Reading the description for the vampire conspiracy, it sounds like Saw with vampires – in the washed out grey dirty room that it starts in does nothing to dispel that impression. Five people are abducted by maniacal vampire and put into a deadly maze of wits and endurance – if they make it out alive, the vampires fortune is theirs but if they fail they will be doing to be his bloodthirsty slaves forever.

On the other side of the credits, the film begins in earnest, with five people in a white marble room – very reminiscent of Cube. 20 minutes and I’m still waiting for the action to start – it’s been a very talky first act with the vampire basically explaining to his 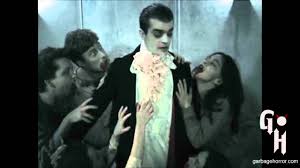 captives what the plot is. What little action we seen, one of the guys taking a swing at the vampire, the vampire tossing another one out of the way – it’s all stilted and slow.

Once we get into exploring the house, the trap some cells aren’t exactly so complicated – it’s picking the lock on one door and trying not to open the other one that houses the vampires.

They go in for foggy flashbacks, very much like Saw – and attempt to connect the relationships between the people in the game. There is a good deal of squabbling between the prisoners, in an attempt to build tension through the interpersonal conflict – but it’s a waste, we haven’t had enough time to really connect with these characters so the squabbling just falls flat.

The film attempts a third act climax by having the remaining characters confront their pasts – that is to say confront the people that they have loved and lost. Dead partners and brothers, resurrected and to emotionally confront them before revealing they are now vampires.

The setting is smart – because they’re wondering through a maze of identical rooms, all they really need is one set with a couple of extra walls to create hallways in. Shooting could be one or two days with a group of extras to provide vampire attacks and the rest of the time we simply got this small cast off for five people.

What really disappoints me, is the lack of  gore. We have some vampire teeth and minimal make up on the horde of bloodsuckers, but the kills and the defense with the stakes never gets particularly bloody – I never get any torn flesh or complex make up jobs. It’s an interesting idea, but lacking both tension and blood. The film ends up being quite unmemorable. You might wanna watch it just for curiosity, but I won’t blame you if you don’t make it all the way through.