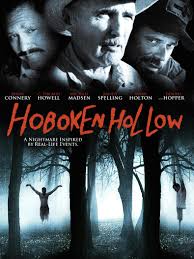 Hoboken Hollow doesn’t waste any time – it begins with a hitchhiker being hanged and somebody butchering human meat before jumping into the credits. It does say it’s inspired by true events, for whatever that’s worth – that’s usually a bit of a warning that it’s going to be complete nonsense.

The credits play out over shots of jerky being hung, a man being chased, an axe and a van – the movie very much is trying to be Texas Chainsaw Massacre (but without a monster like Leatherface), and we know exactly where we stand. Interesting collection of names though, with Dennis hopper, and Michael Madsen, Lynn Shea and C. Thomas Howell – makes me really curious as to what we’re in for.

The Gore is plentiful, but they frequently linger too long on it which makes it clumsy. Nevertheless, the bloodiest hit-and-run you’ve ever seen as well as severed body parts and backwoods creepy keeps my interest.

Things start to slow down in the middle, we are supposed to be more repulsed by the horror of these men slavery, but I’m here for gore and terror. It’s enough to make me wonder if the earlier blood and guts were inserts done after the fact when they decided they needed a little bit more torn flesh.

The climax ends up being weak compared to the strong start on the school, and the entire movie is fairly predictable. This one is not a high recommend, I could probably easily pass on this one and I feel like I’m missing anything

This entry was posted on July 26, 2022 by mathias42. It was filed under Midnight Horror : Bloody Slashers, The Box Set Project, Uncategorized and was tagged with Hoboken Hollow.