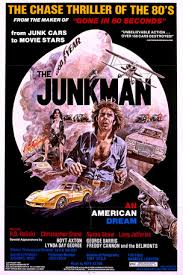 Firing up the junkman, I’m starting to get the impression that Halicki could be repetitive. It’s almost like if you’ve seen one of his films and you’ve seen them all… Then again, the junkman does have a fun meta-twist.

Halicki stars as Hollis, a gearhead turned actor coming out the success of his first film gone in 60 seconds, and beginning work on his next movie. It’s not so much biographical as it is wish fulfillment. In the film, Gone in 60 Seconds is a huge hit and a household name, and Halicki himself is now working with Hollywood stars on his next movie – A good excuse to give Hollywood mainstay Hoyt Axton a nice meaty guest role. However, there’s murder in the air and someone is trying to kill Halicki on his way to the James Dean festival where he’s a guest.

That about sums up the plot, and once again we are treated to a film that is essentially one very long car chase spread over a couple of different vehicles. I like that he uses both his prior success and his new connections to his best advantage – we get some interesting glimpses into his life and his garage. We even get a cameo from Eleanor, all dented and crushed in her former glory, now with Gone in 60 Seconds painted across the side to commemorate the film.

Junkman ends up being just as entertaining of a film as Gone in 60 Seconds, but the meta-connection to Halicki’s previous film hurts it – it effectively keeps it from standing on its own as a movie and turns it into a mere sidequel. Casual viewers will

probably feel like they’ve missed an important part of the story if they haven’t seen Gone in 60 Seconds previously. Halicki would have probably been better off crafting a completely separate story with new people and new situations – we’re constantly reminded that despite his alias in the film, it is in fact, his garage and his cars being used in the film. His name is everywhere – on billboards and garage addresses and such. This overall connection may also have held Halicki himself back, with producers not being certain that he could break away and do something new.
Still, it works as part of the Gone in 60 Seconds series and if you enjoyed his other films, you’ll have fun with this.

This entry was posted on August 13, 2022 by mathias42. It was filed under Director Retrospective, H B Halicki and was tagged with Gone in 60 Seconds, H B Halicki, The Junkman.