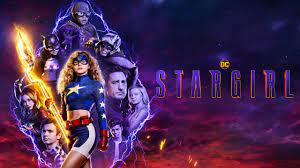 I finally did it! I finally got around to catching up on Stargirl! I’m not sure why I dropped off exactly… I know that Maddie wasn’t really interested in watching it much anymore, but honestly, I thought I Was way further behind than this. There were only four episodes left in the Summer School season, and maybe it’s just because we’re at the climax, but wow, did they deliver.

So, where were we? Eclipse it was free, he’d blasted shiv into oblivion, and was now in the process of haunting each of the JSA members. That’s not too big of a problem, because they’re each dealing with her own baggage. Yolanda still has guilt over killing Brainwave Jr, Beth is watching her parents marriage fall apart, and her only solace is the slight contact she’s managed to get with the original Doctor Midnight. Hourman’s hourglass is broken, and for some reason he’s developing a bond with Solomon Grundy… All of this is fertile ground for Eclipso to work in. Nevertheless, they manage to come together to try and defeat a clip so… And the process, Stargirl is blasted away. It’s pretty shocking, considering how close to the end of the series we are… But we discover that what’s happened is she’s been banished to a shadow realm. a sort of purgatory where Eclipso can toy with her and others, to feed off their negative emotions. It turns out, Shiv is also there… As well as Dr. Midnight. 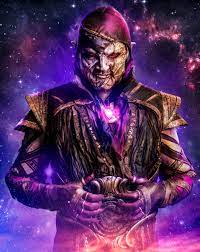 With the help of the shade end guidance from Dr. Midnights goggles, Courtney’s parents managed to rescue them, and heading for the final showdown.

It’s really good, really well done. The characters are rich and complex, and current politics, while sneaking in around the edges, are kept to a minimum… Kind of feels like the good old days.

With that finished, it’s time to move from the summer school season into the Frenemies season. I don’t know if this will be a full 22 episode run or another 13… I have to admit, doing the 13 episode runs has really worked for stalker all. It’s giving them just enough time to do what they need without bogging everything down with filler.

If I have any real complaint about the Frenemies season… It’s that they’re building it as a murder mystery, but the title doesn’t feel congruent with it. Frenemies is a very high school kind of term, well this is leaning heavily into the sort of Agatha Christie murder mystery milieu. On the other hand, it makes sense because the beast storyline is an exploration of whether or not villains can really change… Whether they can truly reform and become allies. This is a very superman take. I pointed this out both and superman and early Supergirl… That part of what they want to do is take the bad guys, find them and fix them… Maybe turn them into friends instead of enemies. Courtney’s cut very much from that same sort of mold… Really trying to embrace shiv and incorporate her into the justice society. Of course sports master and his wife have also moved in right next-door to her, complicating things more than a little bit. Artemis also wants a spot on the GSA… And let’s just say, her mother is quite insistent. Hon

She Hulk on the other hand is a whole different story.

I gotta tell you, it almost feels like a chore watching the show now. Like, I don’t want to give up considering how far into the season we are, and I’ve managed to stick it out this far… But the show is just such a disappointment. This week sees Jen at a wedding, and it really reinforces the whole victim complex that she constantly revels in. Everybody’s mean to her, nobody’s nice except for her… Course the fact that she gets raging drunk and then gets into a fight with a super villain… Well that’s not her fault. Titania hit her first right? Of course back in the B storyline, the assistant and the lawyer from last week are taking over her current case… A “mister immortal“ who can’t die… So he gets married to unsuspecting people, 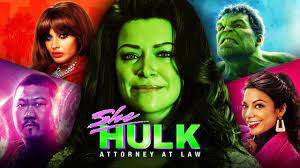 then once he’s gotten what he wants financially or if it just starts to go to Dale, he dies, which terminates the marriage contract, and then comes back to life. It’s one of these stories that you could almost watch them going down a checklist. Seriously, it’s custom made… A “men are bad“ story with room to display a conveniently diverse group of ex-wives… And one ex-husband. Everyone’s different ethnicity, and everyone has a different beef… And it’s just so intentionally politically correct that it knocks you right out of the story. If it had been a group of white haired ladies in their late 50s and 60s, it would actually ring more true and feed into the stereotype they’re going for. I’d also be more convinced if they looked similar. Same race, same general figure. And you can’t make them all black… Because that would just mean Mr. Immortal is a racist. But seriously, most guys have a type… Just look at Hugh Hefner.(sorry, but he’s on my mind because of the trashy podcast Holly and Bridget from the girls next-door are doing). That sort of guy who can get just about anybody he wants is going to go for the same type repeatedly. Doesn’t have to be blonde and busty like Hefner, but skinny, fat, African-American, Latino, men… This is not a natural pattern, and again, it’s smacks of a diversity checklist Rather than organic chemistry, and it’s so jarring that it yanks me right out of the story.

Not there’s really much story here to begin with. She hulk shows up at a wedding, gets to complain about how they don’t want her to be Seahawk at the wedding and take attention away from the bride… She feels like everybody’s being mean to her, Gets into a fight,and then goes home. Seriously, I had a bridesmaid like this. We kicked her out of the wedding party. It is true, that most of the people in this episode are portrayed as jerks and pretty bad folks… The problem is, so is Jen. I don’t like Jen… But I’m supposed to be following her and rooting for her. And that’s kind of the root problem with she hulk in general. She’s just written as such a jerk, and that’s not the Seahawk that I know. It’s a shame too, because I like she hulk. The CGI model looks just fine to me, and I can’t wait to see her team up with the fantastic four. But man, this version is just a drag.

It’s no wonder the show is hemorrhaging viewers, and even though I’m sticking with it for the sheer masochistic duty of it, it’s not one I could recommend. Ugh. Just give me more Stargirl instead.

This entry was posted on September 27, 2022 by mathias42. It was filed under As Seen on TV, Comic Books, Comic Bookshelf and was tagged with Disney Plus, MCU, She Hulk, Stargirl, The CW.