Kings of Horror were screenign a couple of shorts this weekend and the name had me hooked from the word go.

You don’t want to be burgling a storage locker on Christmas night… especially if you’re in a movie called Axemas.

I gotta say,  schtuping in a storage locker is kind of a bit more pathetic than Using them all furniture store… it’s a bad premise, but I imagine it was mostly because they had the location. I’m also disturbed that the killer santa looks a lot like the guitar player in my favorite band…. well, 20 years ago.

Santa himself looks rather uninspired, and the kills are really plain.  We’re also taking way, WAY too much time to get things moving. We don’t get our 1st main kill until halfway through this 20 minute film. The delivery is pretty terrible as well. There’s a great line that the killer goes right before he legends a girl to death with a large rock… “wanna get stoned?” but the problem is it’s delivered so flat, It just fails to land.
This is all a bit of a shame too, because the style and photography here is good. They know how to frame a sequence and light a scene. Everything is shot really well. There’s some fair effects here too, the compound fracture is effectively effectively squirm inducing. The decapitation is serviceable, and they’re smart enough not to linger on it. But sadly, outside of the really original name, this thing is just a misfire.

And yet, somebody still managed to make a sequel. 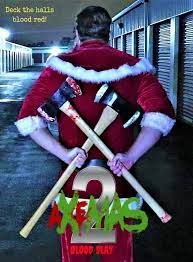 Of course when I say “someone” , I’m talking about John Ward… the person who did the 1st one. It’s not just enough to bring back thepshcho santa though. We’ve also have to bring back the storage locker!

We’ll get to that in a moment…

Santa’s murdering a bad dad out by the dumpster, and I’ll say this… it’s a better looking Santa Claus Jim. It’s also a nice original kill, impelling the dude on a Christmas tree. I’m already feeling better about this short than the previous one.

Even the opening credits are better. A  small Christmas tree burning in a fireplace with a creepy looking mantle… There’s some real progress here.

We got to a news report recapping the previous film, something that happened a year ago now.The final girl is at home watching In agony as the manager gives his own slimy opinions on the events.

The trauma of the murders has her seeing things. She still sees the bloody image of her old dead boyfriend, and it’s messing with her. What her best friend tells her that what she really needs is to get out and start dating again!

I kind of feel like I should hate this. but the truth is, the guy that she picks up at the bookstore and goes on a date with… all the character development is fascinating. Ashamed that he happens to be a psycho obsessed with the murders from the previous year and about ready to kidnap Her and return to the storage locker is! 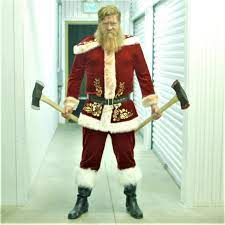 OK, so I’m actually kind of happy this director got a second chance. Because the 2nd film is way better than the 1st period there’s so much more depth here and I honestly watch this short again.It’s a shame that it doesn’t work unless you have the 1st one, but what I’d really like to see is somebody merged the 2. I watched them back-to-back, and the continued is just perfect. But if somebody could cut that original short down to about 10 minutes as a prologue and grafted onto this 1, maybe even beef up some of the kills and effect, I think you might just have something perfect.

The bit at the end actually makes me want more….and that’s cool, because as of Oct 4, 2022 part three and four are still planned to be filmed back to back.
Advertisement

This entry was posted on December 12, 2022 by mathias42. It was filed under Christmas, Christmas Movie, movies .