I’m happy to have gotten this one through the mail, but I wish Tom Welling had either signed in a more visable place or used a diffrent pen…it sadly looks like scribbles….

I actually really love this set of Green Lantern covers  that come together to create one image. I was happy to get these signed at NEO a couple years ago.

David’s comics and novels profoundly shaped my opinion and perception of Star Trek in the 90’s. I was incredibly happy to get him to sign some key pieces. 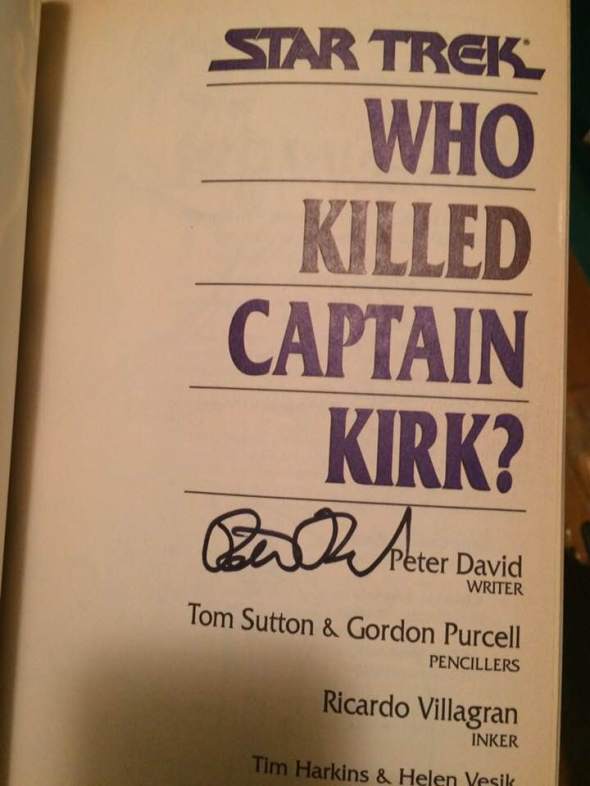 I’ve been prepping for Toyhio this weekend, getting a want list ready and checking my comic database. Along with this, I have also been checking out the state of the comic con in general, trying to plan my schedule for the year.

It’s a new landscape on the convention circuit right now. It’s still ever shifting, but definitely not the same thing I am used to. Zipcon has canceled this year. Cleveland ConCoction has canceled for the third time, and I just heard from the show runner that Youngstown Comicon is also sitting things out again this year. There’s no word on Hall of Fame, Cleveland Comic Con  or the Lorain Comic and Toy Expo. But it’s possible those still might go on. There’s even some rumblings that dark Xmas might return, but all are iffy.

Lake Effect Comicon is gone. So are Dark X-fest, Geekfest and Woo-con. Retro Invasion looks like it might be dead as well. Akron Canton is changing both its name and it’s venue, and dropping the costume contest. That’s a shame, because it was the main thing keeping me driving out that far for a Harper show.
Of the ones that remain, there’s still challenges to navigate. Both Great Lakes Comic Con and RathaCon are requiring guests to be masked at all times. Quite frankly, I don’t want to drive several hours for a show that I’m just going to have to mask up for, so those are off the schedule this year. So are a number of the anime conventions in the area. A lot of these shows are requiring proof of vaccination. I have my card, and I AM fully Vaxxed, but I am not willing to “show my papers“ just to go into a convention or concert. That’s not a move I support.

So what’s left? Below is my tentative convention schedule. Where I’m going, and whether or not I’ll have Maddie accompanying me. There’s several new shows that we’re going to try out for the first time this year and I’m hoping it’ll be good. The big autograph shows, Horrorhound, Day of the Dead, and Steel City, look like they’re all still going, but none have posted any guests I’m interested in.

We will be hitting the road with my buddy Mike for Horror Realm though. There’s a Halloween/Escape From New York alum showing up there, and I still need to get Tiffany Shepis on my Victor Crowley poster. Besides, I generally have fun
out, and the drive isn’t too brutal. Wasteland is still on the schedule as well, autograph prices have traditionally been more reasonable there,

and it feels like one of my last strong holds… The last bastion of hope in the horror convention world LOL!

I only did about a dozen shows last year, and about a third of them were just marketplaces. I’m trying to include more genuine conventions this year, because I really do miss those gatherings and those kind of people. Still, this year’s list is not much longer than last years, and I’m not sure how that bodes for the future of the convention scene. In a marketplace that was already too crowded, the plague really just hastened the death of a lot of small start ups… That damnable Wizard World survived, but in a smaller format and with re-branding. I still worry that they’ll choke out the remainder of the small, intimate and friendly conventions I prefer. Still, it’s my hope that the ones that have survived the plague have proven themselves resilient enough to go on.

Here’s my current con schedule for this year.

(BTW, the three Westlake shows are all Harper shows – basically marketplaces rather than cons, but they’re so close to home that it’s still worth hitting if I have nothing better to do.)

Time to hit the road.

I’m only recently getting into Ostrander’s legendary run on Spectre, but I remember back in the 90’s always seeing those amazing covers that Tom Mandrake was creating. I love that I got a couple of these signed at NEO Comicon

I’ve always been a fan of Jim Shooter, and love the Valient universe he created. (I got Bob Hall on this one too!)

Sternako is one of the legendary Shadow artists. I got him before his autograph price suddenly tripled.

I’ve met J.R. Bookwalter several tims n the con circuit, not to mention at the actual screening of Robot Ninja. He’s a great producer of trashy horror and an amazing repository of filmmaking in the lat 80’s/early 90’s. 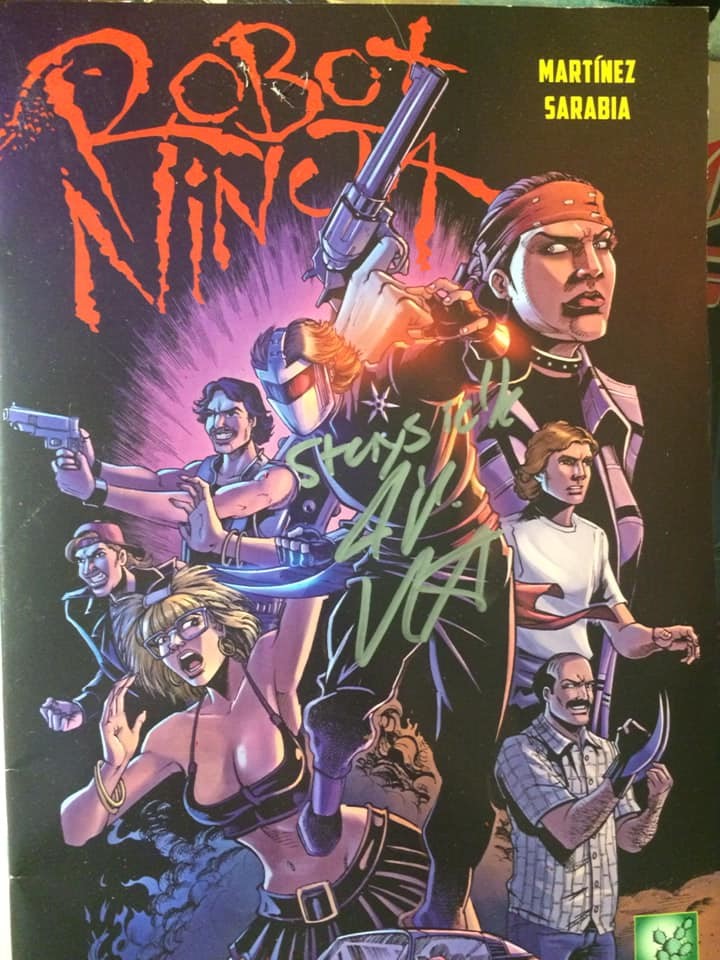 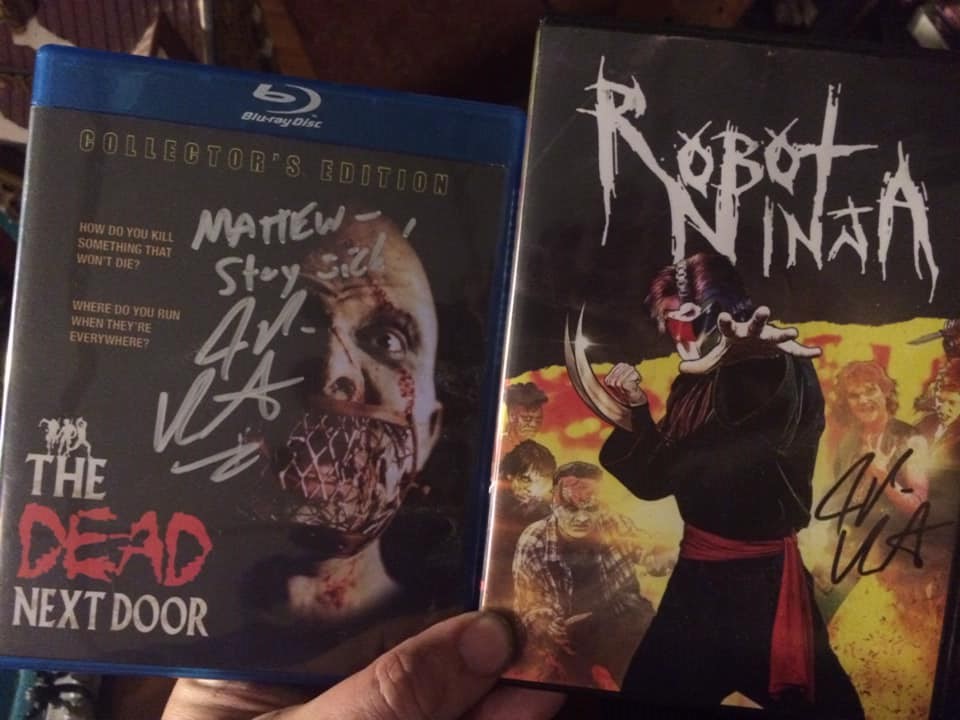 Every week, I’m a regular listener to Joe and Adam on the movie Crypt and this poster, when I saw it in Adam’s store, was just too cool to pass up, signed by both of them (and Adam’s dog Arwin!).

I actually really enjoyed Brian Canini‘s “The Big Year” – a diary indie comic I picked up at an indie festival.

He was there when Marvel was still Timely 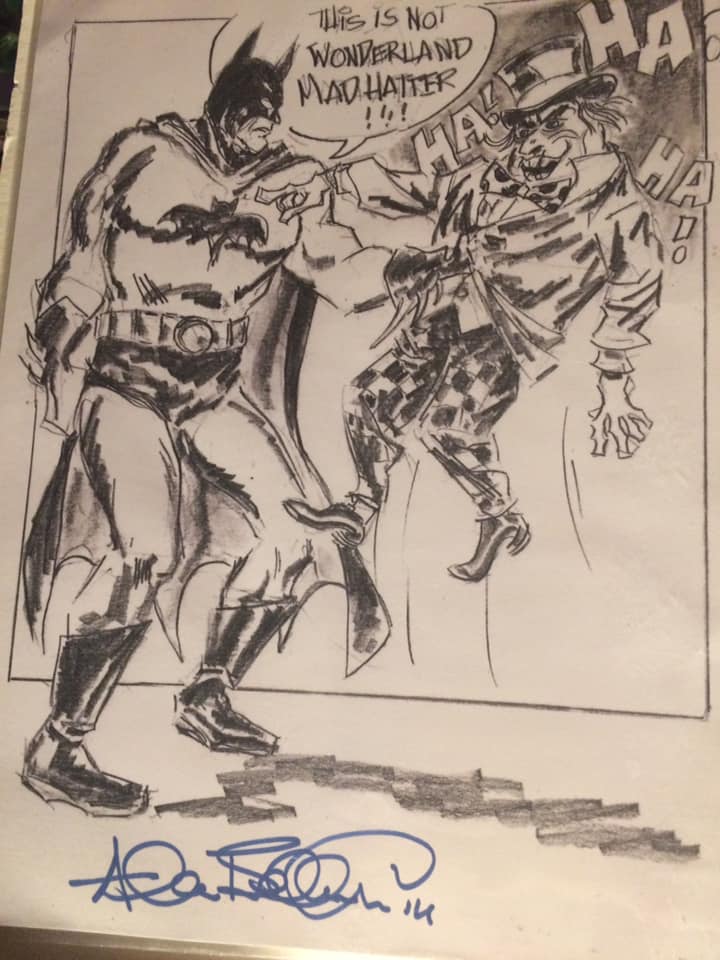 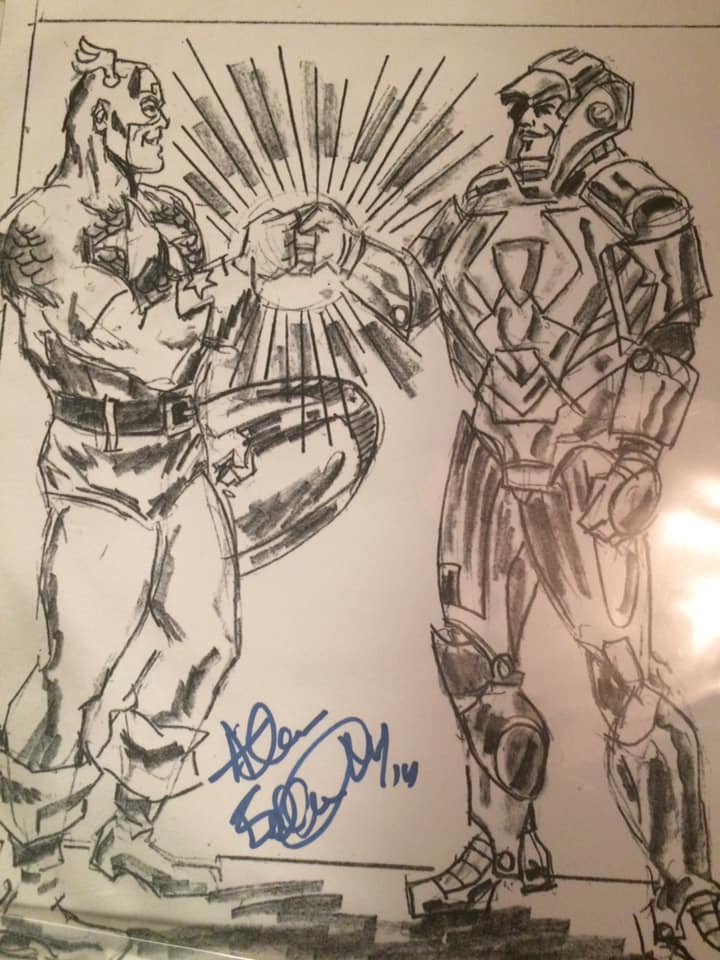 To this day, I think Routh’s Superman is underrated, but he took everything that made him appealing as Clark Kent and rolled them even more effectively into his performance as The Atom!

Mike Zeck’s art on the Punisher is one of my definitives. But it was also instantly recognizable on the Batman mini “10 Nights of the Beast” 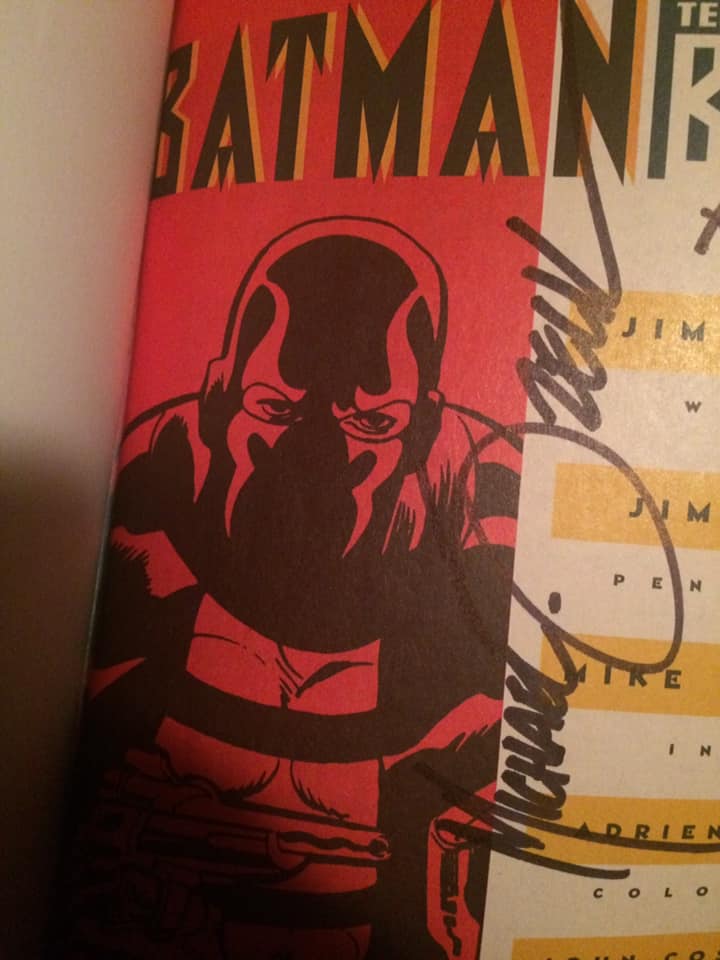 Denny O’Neil is the legendary editor of Batman in the 80’s and 90’s. But more importantly, he was the writer of the Shadow at DC in the 70’s!

Jae Lee was one of the biggest artists of the 90’s and I was so thrilled that he did some Shadow work- I had to get him on this issue of Masks!

I’m all about the Green Hornet. Loved meeting Hester.

That’s right, the little boy from the Shining starts off a poster for me!

Jackey Neyman Jones is the last survivor of the making of Manos! She signed her memoir for me. 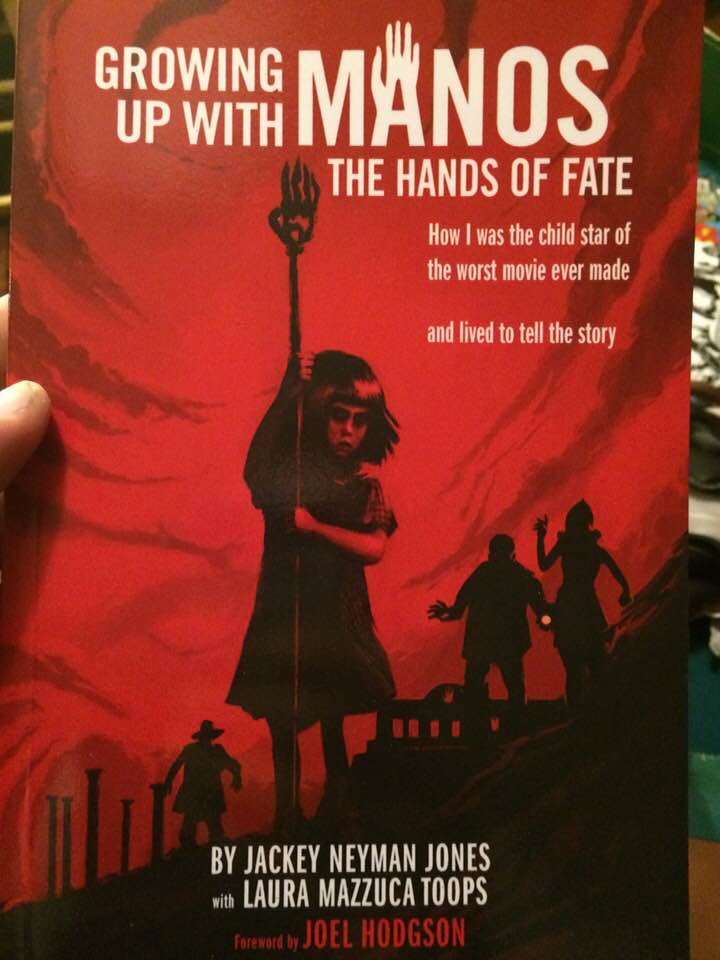 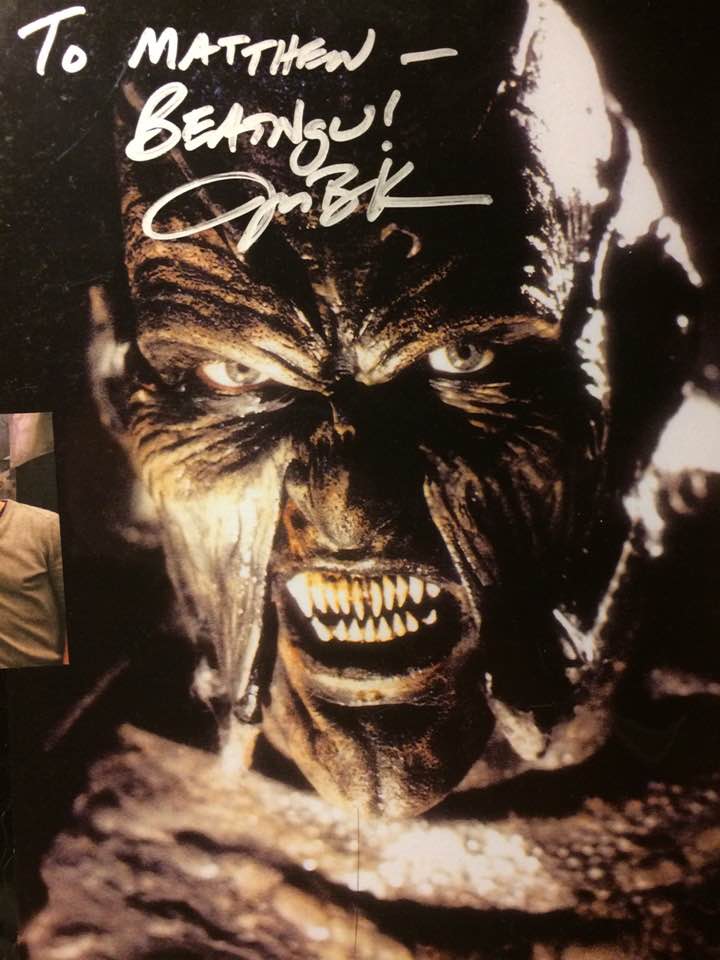 I know that’s a confusing poster, but it’s a fascinating piece by Superman artist Jon Bogdanove

One of the great Spider-Man artist, and an incredibly nice guy too.

While I’ve focused mainly on my Hellraiser poster for autographs, over the years, I’ve acquired a few individual items over the years.

Wilde was giving these out as she signed my poster – trying to promote her book. 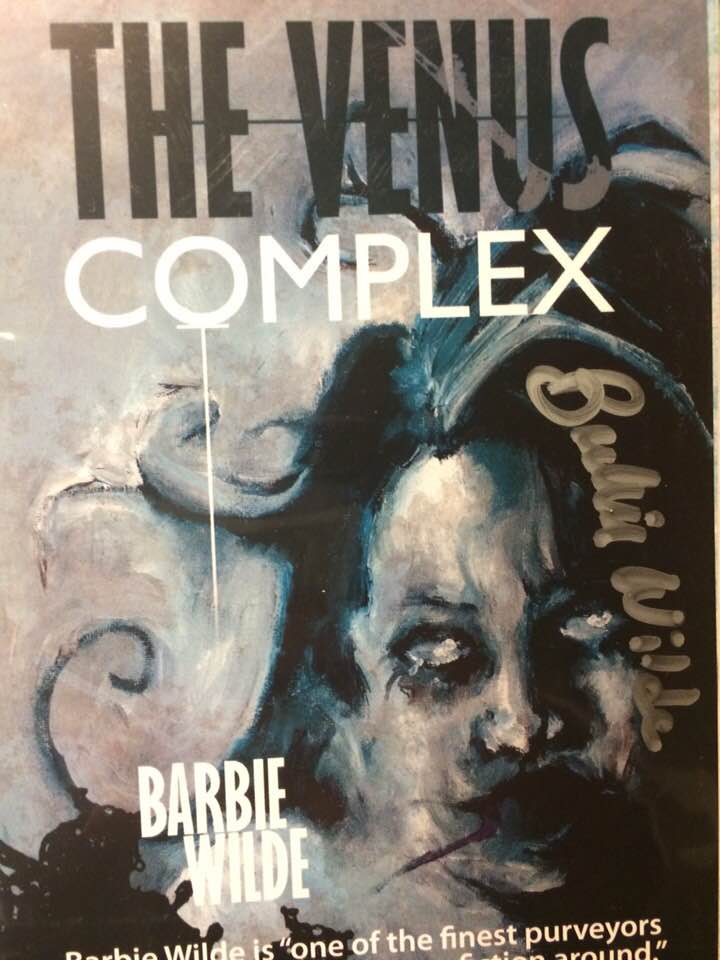 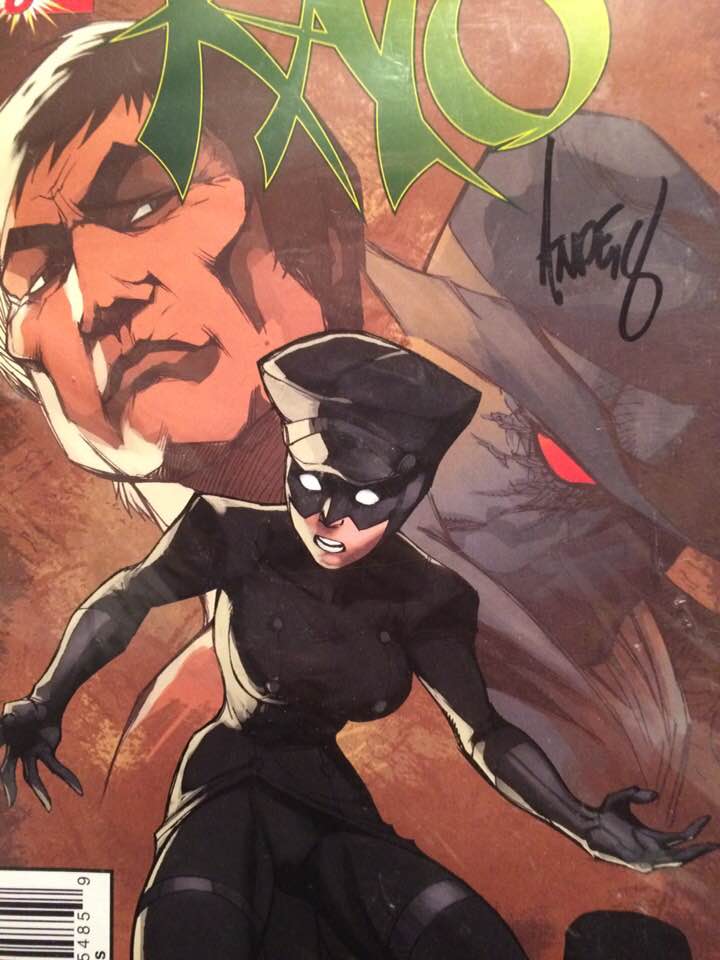