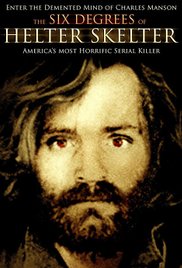 From IMDB : “”The Six Degrees of Helter Skelter” walks in the footsteps of the Manson Family, visiting over 40 locations related to the infamous Tate/LaBianca murders, and tying together the dozens of odd connections between Charles Manson and the Hollywood elite. Entertainingly led by famous Hollywood historian Scott Michaels (E!’s 20 Most Horrifying Hollywood Murders, Dearly Departed: Vol. 1, FindADeath.com), this epic documentary employs never-before-seen autopsy reports (analyzed with the help of the Los Angeles Department of the Coroner), dozens of rare photographs, original Manson Family music recordings, and modern-day visits to the locations where the action went down, in the most complete retelling of the Manson Murders ever put on film. ”

This documentary is a fascinating exploration of the Manson family murders. It’s hosted by someone who obviously loves the material and is completely enthralled by the exploration. This guy knows more about the Manson family then anyone I have ever encountered – and I happen to know some people totally obsessed with serial killers… Seriously this guy put them to shame!

He doesn’t just retell the story, he investigates it – taking us to the places where the murders happened, tracing the ground that the family took and showing us how Charles Manson build up this following, how he sank into his delusions and gives a really clear picture of how we finally got to this horrific act.  I learned more about these murderers and this case than I’ve ever known, and I discovered from this brilliant documentary more  than any books that I’ve read. I didn’t expect to like this so much, I didn’t expect to learn so much – I threw this one on as a whim, almost wondering what it was doing in a box set like this, but looking back, it fits perfectly – this is real life horror and possibly my favourite film out of this entire set (It seems like I keep saying that!) This documentary alone is worth the price of admission and I am going to be revisiting this one again and again.

The King of Kong

Of all the video game documentaries out there, this one has probably become the most famous. It creates an underdog story of Steve Wiebe– the man who wants to prove he holds the record for the highest Donkey Kong score ever, versus Billy Mitchell – the reigning champion of Pac-Man and a contender for the very same score.

Mitchell is part of the video game establishment – one of the elites, one of the crowd. He’s been a part of that world where video game champions reign for a very long time. Wiebe on the other hand is an outsider, driven by a singular passion for Donkey Kong.

Where as  in another doc – Chasing Ghosts, we saw some of the intrigue and in-fighting that happens within the world of video game champions, it’s brought into

sharp focus here. Steve Wiebe is in some ways, ostracized in the community, there is a genuine desire it seems for Mitchell to clinch the championship – a desire that is juxtaposed against the skepticism of Weibe’s own skill. It’s hard to say how much of this rivalry was true and how much was the result of judicious editing – the point of a documentary is to craft a story using interviews and documented footage.  In many interviews it seems to me that the rivalry is been overstated, but there is 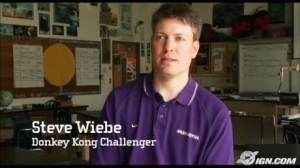 definitely a sort of exclusionary feel from what we see with Weibe. We also see how certain game champions are frowned upon and look at with suspicion All in all the filmmakers have managed to create a riveting story here and one that will absolutely take you beyond just nostalgia. It’s a film that actually makesyou fall in love with video games all over again.

The King of Arcades 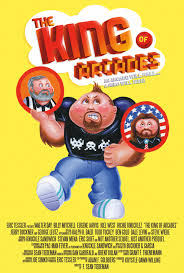 As we look to the different video game documentaries, there’s been elements that are prevalent in each one. Chasing Ghosts reminds us of our love of video games, but it’s King of Kong that really makes us fall in love with the old system.  The Tetris Masters brings us back in the competition and reminds us how hard it is to become a master. The King of Arcades reminds us that the communal arcades experience is an important one.

This is The story of Richie Knuckles.

Richie’s focus and intent is in bringing the arcade experience back by building one of his own. What’s really striking about Richie in these stories is how much he loves the games themselves – the time that he spends tracking down old arcade cabinets and rebuilding them. The amount of time that he spends loving the genre, and obsessing over the idea of the video games. There is a desperate attempt to recapture something that we really have lost in this age of online multiplayer. It’s omething about that communal experience, that commonality, that gathering place where we come to play but also come to be… Come to hang out. It’s an important thing. It’s an important place, it’s the mystique that rolls around these games in this era – I totally get it. That’s what makes this film so compelling – we get it, we share that

same passion for these games, for this place, for this thing. Now, perhaps Richie Knuckles takes this to an extreme, but that’s really the purpose of film – that others live a life that we can experience vicariously through them. The ending is bittersweet, and in many ways we are just wondering if it’s really worth it… But one look at Richie knuckles face and you could see – yes it absolutely is. Of all the video game documentaries out there, this is absolutely one of my favourites. It’s right up there on par with the King of Kong in terms of sheer relatability and passion. This is another absolute must have if you love the genre and you love all video games.

The Extasy of Order :The Tetris Masters

I’m going to come right out and say it. I am such a sucker for all of these video game documentaries. I mean seriously, I am sucking these things up as fast as they can make them!

The Tetris Masters is an interesting film. There is a universality to Tetris – even more so then games like Pac man and Mario Bros. It seems like everybody’s played Tetris at one point to another, it’s as ubiquitous at Solitaire. I skipped the whole 8-bit age, I never owned an NES, but I still played Tetris – it was the demo game on every GameBoy display at every toy store, Department store and electronics store in Ohio. Walking over to the GameBoy display and going a couple rounds of Tetris was always a great way to kill some time by your mother shopped in other parts of the store. I got okay, I never got great. I remember sitting on the floor at my friend Mike’s house, while his brother Jeff was showing me the trick to sliding in one of those pieces at the very last moment. Yeah, Tetris is pervasive in our society.

Still, it seems like a strange subject for a film – unlike other video games, it lacks a story. There are no characters, yet there is a community of Tetris players, as engaged and devoted else there is to any other video game out there. This is really what the movie really focuses on.

Unlike the King of Kong , there is a broader focus here – half a dozen main characters are really being followed through in this story. But even more so is the looming competition. The tournament was present in King Kong, but it was the McGuffin – where as in Ecstasy of Order, the tournament is almost character itself, and most definitely a driving force as well as the background. It is always present.

What’s really interesting in the Tetris Masters, is these little break-ins that they throw out once a while, describing the technical aspects of Tetris play and illustrating them for all to see. It’s always done on a classic NES – that’s considered the definitive version of the game, and obviously you need some sort of a control for uniformity. I found it surprising that the NS was the choice, for me the gameboy always felt like the definitive version, but then again perhaps that’s just because that’s the one I always saw everywhere – admit it, it’s a port and not the sort of far more colourful game that the NES version is.

The film brings us back to the old Nintendo World Championships as well, bringing in the ultimate winner. It’s an interesting twist – because you’re familiar with this idea from films like the Wizard, but to see the actual thing… It’s an almost bizarre time capsule for me.

Ecstasy of order is one of the better docs out there and I recommend getting out to see this one. You will come away with a greater appreciation for Tetris and spent some time in that wonderful retro gaming era. 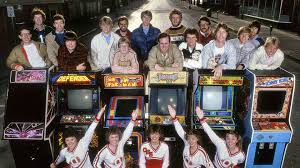 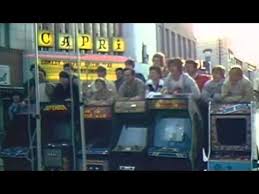