Night of the Demons

Occasionally when I hear people speak about night of the Demons 2009, it’s negative. More often though, they simply don’t speak about it at all. I think a lot of people weren’t even aware this came out… It’s almost as if the fan base didn’t get the memo and those who did responded with the sort of derision that has become typical in the current climate of remake fatigue.

For me, night of the Demons 2009 is actually a remake done right. It’snot slavishly devoted to the original, it takes the premise and then runs off its own direction. The villain is still very much the same, and the concept is completely recognizable – resurrected Demons in the local haunted house. Yet it manages to feel modern, with color filters when appropriate – green tones instead of the warm oranges of the 80s. With make ups that are just as horrific but grizzly in a new millennium sort of way. 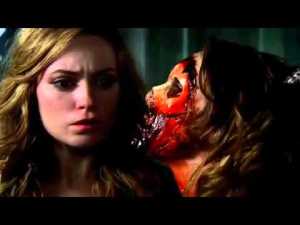 We’ve got Angela hosting a party again – this one’s a little different as it’s a pay for play houseparty, with a little bit more attendance and debauchery involved. We’ve  got a scream queen inserted, this time around at Tiffany Shepis doing her best to act as young as the rest of the cast is. Even Linnea Quigley makes a cameo, showing some homage to the original.

The Demons are far more scarier here, perhaps a bit more aggressive in the kinetic filmmaking style of the 2000s.The film feels bloodier and grander in scope. There may be a reason for that.

inflation that’s close to 2.2 million dollars. Compare that to the ten million dollars that was poured into this remake and we can see just why this looks so much slicker than the original.

All in all, I like this… Much like Dawn of the Dead, and the Texas Chainsaw Massacre, it’s a remake that captures the spirit of the original but updated for a modern audience and takes full advantage of filmmaking technology that wasn’t available 20 years ago. I’m not certain that I really need a sequel to this remake, but I’m glad that this one exists and honestly I’m equally likely to grab this as I am the original – I feel quite equal appreciation for both.

Night of the Demons 3 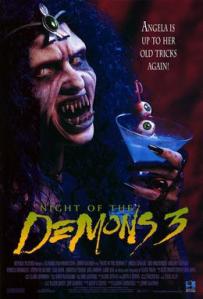 Night of the Demons part three has a fairly silly cold open involving a cop coming to investigate something going on at Hull House. Still, it sets the tone for the film – fun without taking itself to seriously.

Again, I’m surprised to see how long this one took to get out. It’s another three or four years when I would have sworn it was filmed back to back with the second movie. Seriously, if you look at those VHS covers it certainly seems like it. Indeed, if you look at Angela’s look in general it also fuels that suspicion.

Speaking of Angela, She feels more like a ghost then ever here, and it’s a good fit for her. She has more scenes with her “normal” look, yet still manages to feel eerie – cleaner and more ethereal than she ever was in the first movie. 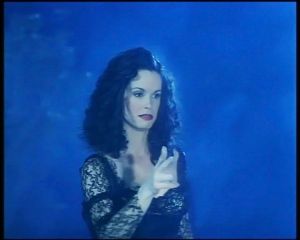 This film frontloads all the scenes that don’t take place in Hull House and give us a distinctly different motivation for coming to the place. We’ve got a bunch of people on the run from the law after a shoot out at the local liquor store, and Hull House is the place they land while trying to evade the cops.

The look of the place is an odd choice though, the upstairs of the house are comfortable and clean and decorated. We get the impression that the lower levels (and possibly the top floors) are still filthy since they were use footage from the first film again but The main action takes place on this very different set.
This set up also presents with the cliche of the psycho and paranoid gunman who is a counterpoint to the supernatural threat of the film – reasonably predictable for a late 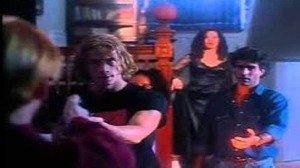 series sequel. In some ways it makes up for the lack of other monsters throughout the first and second acts. For more than half of this movie we only have Angela stocking through the house. She is at the height of her powers admittedly, and at this point a fully developed villain but she doesn’t really get any daemonic helpers until we are well into the third act whereas in the first film it seems like we got to the monsters earlier.

When they show up however, it’s spectacular. It’s early days for morphing FX, shortly 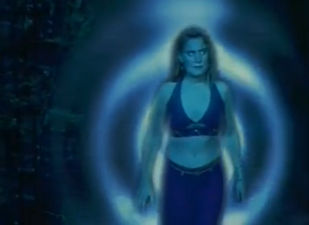 after T2 but they’re putting them to really good use in this film, enhancing already impressive make ups. The house gets darker and foggier as the movie goes on, enhancing the atmosphere and setting us up for more and more inventive kills – the nightmare on elm street vibe is strong here.
All in all, it’s a strong sequel – not necessarily the best of the series, but enough I think, to have warranted a fourth entry… Sadly it seems the timing just wasn’t right, after all the 90s were not a great time for horror and we’d have to wait over a decade until we got a new release – by then, it would be a remake.

Night of the Demons 2

You know, when as hard as they were pushing for night of the Demons to become a franchise, I would’ve expected them to have rushed  production… 12 to 16 months was when I figured we’d see the second installment – sometime in 1990. But no, it ended up being six years and we didn’t see a new one of his films until 1994. Because of all this time that has passed Angela looks a little bit different when she is in her human guise, but the make up for her monster form  still looks very recognizable.

It may also be because of this longer gap that night of the Demons to feels more like a late series sequel rather than an immediate follow-up. We do something fairly bold here, and instead of giving us another haunted house flick they transplant the action – and it turns more into a possession/slasher flick.

This time when the group of teens partying at Hull House arrive (A little more than a half hour into the film), they have the good sense to get out quick (literally eighteen minuets later) but not before Angela

hitches a ride in the popular girl’s purse. The main demonic assault in this film takes place in the catholic school – a good backdrop that should cause more dread and eeriness then it actually does. Still, there’s plenty of decent make up, respectable gore (man….that battle right before the end….) and callbacks to the original as they chase the demons back to the haunted house they came from. It’s an adequate sequel, but I feel like I didn’t get what I wanted from it. I really wanted another movie where we have Angela stalking hapless teenagers through the filth encrusted walls of the haunted house.

It’s a perfectly serviceable movie, and I don’t hate it. I actually like the good over evil themes and the fact that the religious folks, while over the top, aren’t really played for fools or hypocrites. Still, the attempt to shoehorn a backstory and relationship here feels clunky, like a misstep – much like the second installment of the nightmare on elm street series. Of course everybody knows the Freddy movies came back better than ever with the third sequel. I don’t remember anything about the third movie in this franchise to say whether or not that holds true here. Guess we’ll have to go and find out! 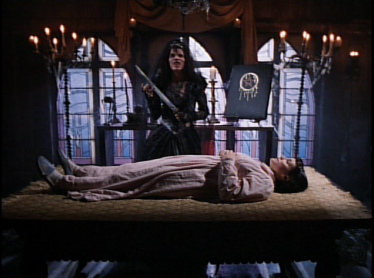 Night of the Demons

Night of the Demons is a quintessential the 80s horror film… The music, the look, the hairstyles especially! There is something distinct about 80s horror, it’s got a certain sort of filth on the walls. It has a warm red and orange lighting to it. It’s an evolution from the gothic horror of the 60’s and a disctinct take on the classic haunted houses of the 50’s. There is a Central antagonist that’s made up in a very solid, rubbery way. Rubbery, but with full movement due to advances in foam latex.  Like I said, very 80’s.

Then there’s the teeth. Oh my God, the teeth. What is it about Grody jagged teeth that affects me on such a primal level?

The characters are all stereotypes of course. It’s  a shortcut to connecting us with the victims before they’re picked off one by one. The house itself, remind me a great deal of

the Nightmare on Elm Street house – with its dirty walls covered in cobwebs.  Indeed, this movie almost feels like it’s trying to be a mixture of Elm Street and Return of the Living dead. The story is simple, Halloween party gone wrong – complete with the seance that awakens the demons inside the house. The marketing campaign obviously was trying to make a slasher franchise of this, and employs Angela – the head daemon as the next slasher icon.

She never took hold, and I can’t quite consider this a bonafide 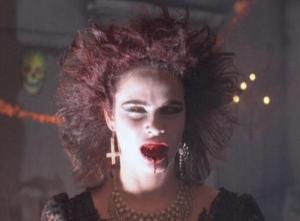 classic. Still, it’s a fun and solid monster movie – and an old favorite.

And it’s worth noting that there are a couple of iconic scenes – the lipstick one comes to mind immediately! This was never ever going to be more than a direct video series though, and I seem to remember the sequel as delivering diminishing returns. Maybe it’s time to explore those next!