I don’t often have my family with me when I hit an advance screening, but in the case of Disney’s new documentary Born in China, it was a must. My youngest daughter loves pandas and that alone was enough to compel her to run out to the theater. I settled into the nice reclining chairs in Rocky River and ambivalently prepared myself for an hour and a half of nature channel on the big screen. I wasn’t expecting to be impressed and I had no idea the oddessy that we were all just about to embark on.

The first thing that strikes you about Born in China is just how lush it is. The vast panoramas that just seem to go on forever immediately draw you in and then take off on breathtaking aerial shots. It’s all of this before we are even introduced to the animals and Disney is obviously showing that 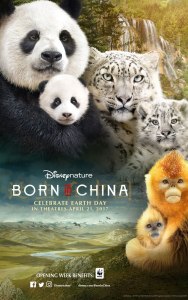 they’ve put the maximum effort into this film. This isn’t just going to be any old nature documentary.

We follow a year in the life of several animal families, a group of monkeys, a panda mother and daughter, a snow leopard and her two cubs as well as a herd of elk. The leopard and monkeys get the lions share of the screen time, having the most story to follow, and yet there’s a certain charm to the way we cut back and forth between narratives and the bumbling panda never failed to make my Lydia laugh as it tumbled down the trees and hills time and time again.

The story about the skull faced monkeys in particular seemed to have the most characters and factions as our young subject explores other families and groups of monkeys before finally returning to it’s family and finally seeming to find his place.

My elder daughter Maddie found herself drawn more to the snow leopard’s segments. The story of the leopard is far more aggressive as the mother hunts and tries to provide for her cubs while defending her territory. The violence of the hunt is muted to keep us in a “G” rating, we see no blood and absent is the actual killing strike. I know it seems silly, but I kind of miss it.

The film makers work hard to craft a narrative from their years worth of filming. Some of the stories are a triumphant adventure, others are melancholy. Not everyone gets a happy ending,

but they frame the movie with the Chinese myth about the Storks – the idea that they carry the spirit of the dead with them, perpetuating the cycle of life and death. It’s an adequate  conceit, but honestly, the writing isn’t what you are here for. Born in China is beautifully filmed. It’s one of those rare films that you really need to see in a movie theater with a good screen – no drive-in theares (sorry Aut-O-Rama! I still love you and I’ll be out this summer, I promise!) or HD TVs for this, there’s too much detail and scope for any other platform to do it justice.

Stay for the credits by the way. There’s behind the scenes stuff, bloopers and general shenanigans with the animals as they explore the cameras and check inside the

Seriously, if you’re a fan of documentaries, or nature channel presentations, and especially if you have kids, take them to this. It’s a brilliant departure from the summer blockbusters full of superheros and lazers and by-the-numbers CGI cartoons.

Born in China opens in theaters nationwide this Friday