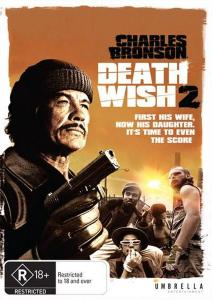 It’s a quick and efficient recap that gets us directly into the film and moves us to this installments atrocity. Paul Kersey is the most unlucky man ever with the same kind of assault happening to his housekeeper in Chicago that happened in New York. After his daughter is kidnapped and dies, the decent into violence is swift, and it almost feels like we race through the first act.

It feels good though. We see him prep and there’s the hat….that knit cap I was completely missing in the first film. It’s a new city and a different gun, but Bronson  slips back into the role of vigilante easily and it fits him like a glove.

Hang on. Is that Lawrence Fishbourne??? OMG it is! The pink sunglasses threw me off. (And I remember that mayor or commissioner guy from an episode of the Twilight zone) I mean there’s been volumes written about Jeff Goldbulm in the first one, but I don’t 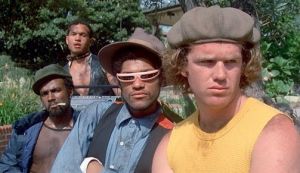 I was surprised to see Vincent Gardenia as the cop from the last film show up here (even more surprised to see him buy it in the beginning of  the third act). It didn’t seem like the sort of sequel that really requires  all of the old cast show up for an encore – after all, it’s a diffrent actress playing the daughter and no other alumni show up. 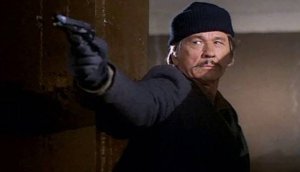 At times, LA feels like the wrong setting for this. Not as grimy as New York. Even when they find sufficiently seedy areas  for action, it’s slicker than I remember with bigger guns and smoother action. Indeed, it makes for almost a textbook sequel. Bigger and louder than the first. More action, more bullets and everything I could ask from a Death Wish film.

Except he asks the girlfriend to marry him at the end. What’s he doing? He just signed that poor woman’s death warrant! Run Jill Ireland! RUN!