Somehow, right from the start, this feels like a Canon film. I don’t know if it’s the low angle, or the leather jacket on Bronson, but this movie definitely want’s you to know exactly what kind of film it is as Bronson guns down three men attacking a helpless woman.

Somehow Paul Kersey has a new family here – and let’s be honest. It’s only ten minuets in and I already know this is going to end badly for them. Sure enough, not even five minuets later the daughter is dead.

Because it’s the end of the 80’s and we’re firmly in formula mode now, this becomes “The Vigilante vs. Drug Dealers”! I kind of liked it better when the bad guys were leather clad punks, but any port in a storm. Bonus points for one of the dealers being Star Trek Voyager’s Tim Russ, not to mention that Danny Trejo’s in this thing as well (two more guys I’ve met over the years!). 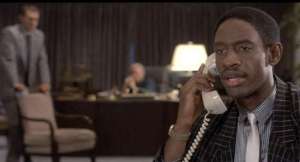 It feels like the Punisher more than ever to me. The idea of the Vigilante being hired by a rich patron to wipe out the criminal element. It’s very reminiscent of the Punisher’s “Circle of Blood” storyline. Thre’s stalking, sneaking around and false names.  The similarity is only enhanced by the fact that this time around, the Vigilante is going after the mob.

Its interesting to see the police investigation back and trying to find the Vigilante. Even the Architecture background of Paul Kersey is given some lip service, though his identity is still very much more wrapped up in being the vigilante than being an artist.

I can’t help but notice that jokes are starting to get attached to increasingly outrageous kills. “I wish he’d just drop dead!” as a gangster plummets from his apartment building window and plows into a windshield.

It’s one of the more interesting sequels though because just when you think it’s over, there’s a double cross twist waiting to spring. It’s a nice bit of innovation to keep the series fresh. In fact, it’s really got my interest up for the next one.