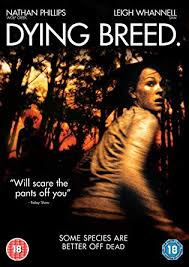 Dying breed start interestingly enough with a history lesson, escape, and a beast. It’s definitely trying to get on my good side with the copious amounts of blood, although the CG wolf could’ve been better done.

Fast forward to modern day on an airplane. We’ve got attractive young people heading to an exotic destination – in this case Tasmania – and children creepily recitng nursery rhymes on the trip there. We also get a couple of flashbacks which make it feel very much like this is going to be a beast movie… or is it a backwoods movie with a beastial flavour? Interesting idea, considering Tasmania is not usually thought of as a lost or hidden environment. It’s treated as a mysterious backwater, highlighting the more grimey elements of Australia. Wood walls and Sheetmetal… It’s not that we generally expect from ozploitation.

They stay the night at a local pub, and I kind of feel bad when they leave in the morning – the colourful locals are one of the best parts of this movie. Indeed, the standard issue ominous little kid shows up 15 minutes into the movie and you know things are about to go down.

At the end of the day, it’s not the sort of movie that I should like – but the setting and the cast elevated to the point of being something I really enjoy. I’m not certain that I’d ever bother to watch again, but I’m glad I saw it. It’s a sort of movie where if it shows up in the middle of a film festival, say a surprise act of sorts, I certainly wouldn’t be disappointed.