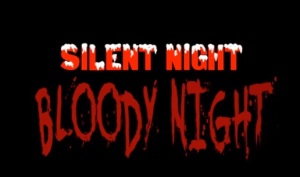 The film we’re reviewing today is actually another fan film done for the Silent Night Deadly Night series, and should not be confused with the 1972 slasher by the same name. This fan made Silent Night Bloody Night is shockingly atmospheric, filmed at a beautiful location. It’s short on story though. Billy shows up (in a surprisingly accurate Santa suit by the way, with pockets and bells on the sleeves and everything!) within the first fifteen seconds, prowling the place with an axe. There’s a costume party going and he immediately begins stalking and killing those in need of punishment.

This particular fan film is done up by SAJO Productions, a youtube film producer that specializes in vs match ups like Jason Vorhees vs. Harry Warden, that sort of thing. The focus is to cut to the chase, and give us the good parts, and that’s what this really 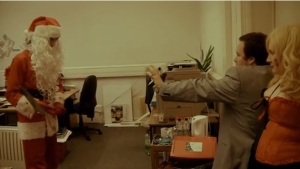 does. The production values are really good, it’s beautifully shot with actors that seem to know what they are doing. I almost wish the kids behind SNDN 6 had this kind of quality because while their story was really good, their quality was poor. This one is the exact opposite. It’s a great looking short, with no story to speak of. Still, that’s not actually my main beef with it. My biggest problem is the lack of blood. They went to the trouble of getting a good camera to record this and adding cool filters that make it look like 1980, They know how to frame a shot for maximum suspense, yet there’s a sad lack of the red stuff. The axe swings into people with great frequency, but the hits are all dry. Do these guys not know how to set up a squib or a blood pump? Did NO ONE have a spare severed hand laying around (I’ve got like, three in my basement alone)? The gore is the one thing they really need to up their game. If the kids from SNDN6 could bring the blood, I KNOW these guys should be able to.

There’s two of these by the way, with part two starting just as the first one leaves off (it’s pretty much one short all together). In fact, pretty much the first three minuets are just recap and credits. They do a bit better with the blood (not much, just a little bit – like cutting holes in the ugly sweter that’s just been axed) and Berenice Gillham really ought to stop pushing Santa down the stairs. It’s becoming a them and it just seems to piss him off.

It’s worth checking these out, as long as you do it with a kind of “Special Features” mindset. If you like the sort of killer Santa action we get from the first couple films, you’ll have fun with this. 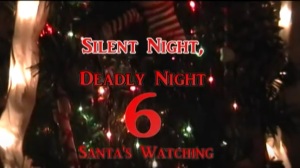 Can you believe someone actually made a fan film sequel to this series? What’s really surprising is that there’s some genuinely interesting ideas here. I’m giving it a LOT of slack because these guys are obviously amateurs, kids  playing with Halloween masks, but they are still headed in the right direction.

According to them, Billy Cauldwell was buried in an unmarked grave because they feared his evil might come back. Blood accidentally spilled on the grave causes him to rise, much like in the Hammer Dracula films. Billy rises, desiccated and zombified, and then wanders to town where he encounters a bell ringing Santa covering a Salvation 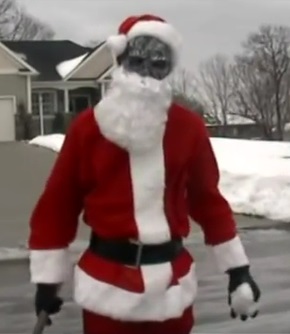 pot. He rips Santa’s heart out and dons his suit and we are full speed ahead.

SNDN6 continues the long tradition of liberally reusing footage from previous films and seeks to fit itself firmly in the continuity, despite the somewhat mystical angle.

What’s interesting is to see how competent this is. They do fall into some of the amateur traps, excessive swearing, horror posters and movies around (though you can actually forgive the movies – they keep watching the SNDN sequels and that’s actually a tradition in these movies), but they avoid some big ones. They don’t linger too long on the gore. You get just enough to make the pint but not so much that you realize what you’re looking at. They also don’t skimp on the foley or music. The background score is actually quite good. No metal and not overly synthy. The Foley sound effects are actually quite good as well. It’s just as much as we need, and doesn’t come off as hollow or overdubbed. They stay on track – there’s a coherent story here and they not only create their own mythology, they sticks with it, reinforcing it rather than meandering from set piece to set piece.

Their biggest mistake is mostly towards the beginning. The cast is obviously young 16-19 years old.The problem is several of the characters they want in this movie need 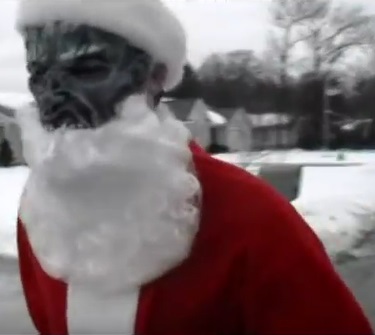 to be in their forties or fifties. These kids trying to lay old never works; especially when they don’t have the clothes for it. An overcoat isn’t enough to make a detective, especially if you’re wearing shorts underneath. The smartest thing they do here is to move the third act action to a house where a bunch of teenagers are hanging out, allowing Billy to pick them off one by one.

I got to be honest, I dig this so much. They obviously are fans of the series, and they GET it. Billy screams “Punish!” and dresses in a Santa suit. The (unfortunately very obvious) fake axe is ever present and the kills are remarkable clever with beheading, limbs lopped off and the best uses of a snow blower ever. I kind of wish the real studios would take this approach. It’s not strong enough to stand by itself, but it would make a dynamite special feature on a Blu Ray!

You can view it here-

But would you believe, there’s actually ANOTHER fan film out there? 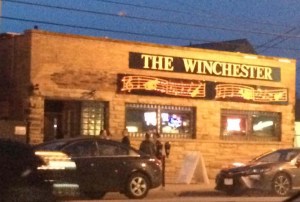 I headed out to the Winchester last night for a special screening of the new short film “case closed”. The cast and filmmaker were on hand, and the films creator, Andrew Sgambati gave a short introduction before the movie ran. I stuck around until after the credits rolled (remember, there just might be a special little something after the end credits! It even happens with short films!). After the lights came up, he returned to the stage and spoke a little bit about the movie he just screened. There may also have been a round of “Happy Birthday to you” sung.

Case Closed is a fan film set in the Batman universe, though if you’re expecting the Dark Knight you’re going to be disappointed.  What we have is a narrative heavily influenced from the Dark Knight trilogy – particularly the interrogation sequence in the second film… The set up is familiar, the Joker has done something horrific, and the plan is already set in motion even though he is in handcuffs. 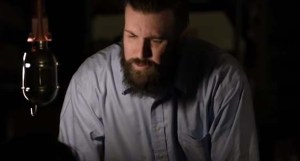 What is interesting here is that the story is told from the perspective of a detective on the case. This has the unsettling effect of making it feel more personal. Usually we see the Joker’s crimes from the perspective of Batman, or the Joker himself. They are statistics, not tragedies. In this case the peril feels very real because the detective’s son is missing. The tragedy is much closer to home.

Our detective by the way, played by Scott Laing, is the real star here. Laing’s impressive performance grounds the piece, which is beautifully shot and composed. With the exception of a brief appearance from Harley Quinn, Laing’s character is the most engaging one on the screen. 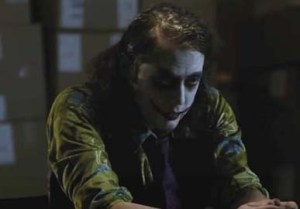 You can actually see Andrew Sgambati’s writing has captured the voice of the Joker quite well here. The dialogue is crisp, it rings true…  unfortunately his performance doesn’t live up to his script. I appreciate that Sgambati doesn’t fall into the trap that a lot of actors do with the Joker – that is to play him big. It’s easy to go over the top with the Joker and got completely off the rails without even realizing it… We go the opposite direction here – with a delivery that feels flat. It’s a shame, because he does capture the physicality of the character and the look is well chosen, but I need a little more expression and subtext in his line delivery. I’m 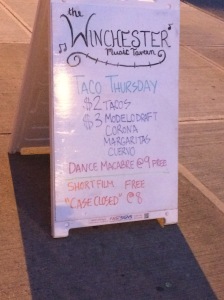 hoping to see him grow into the role as these films progress…and I am expecting to see these films continue. the movie itself ends with the announcement that “The Joker and Harley Quinn will return.” I find it interesting that batman may still be absent. It’s a curious choice, but not an outrageous one. The grounded portrayal of these characters makes introducing the hero dressed up in a Bat costume a little more difficult of a prospect and I can see why they would shy away from it.

I’m about 20 years removed from my own film making days, but I remember the Premier night of Ron’s Big Adventure and I could feel that same electricity in the air at the Winchester last night. The film is on YouTube, and their goal is 10,000 views. Head up there and check it out,  and support our hometown filmmakers!