One of the games my daughter has learned from her Grandfather is Tic Tac Toe. It’s a typical childhood game, and something that we generally grow out of….until we have children.

I found this game in the Amazon App store and downloaded it immediately. it’s still the typical old Tic Tac Toe, but with a slick look and cool neon graphics. You can play against the computer or another person and the difficulty can be set at different levels, along with different size grids, not just the three square by three square we’re used to.

If you have a child in your life, they will love this game. Give it a try, it’s a free download at the app store….and don’t forget, new Violent Blue is up! 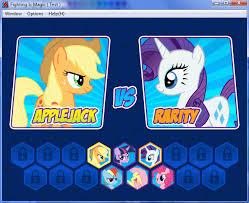 I know, this game has been around for a while – kind of. It’s been on my radar, but I figured I’d never get to play it because, well let’s not get ahead of ourself.

Hasbro has been really good about fan participation in My Little Pony : Friendship is Magic, turning a blind eye to copyright infringement on fan sites, fan fics, fan films, art and the like. However, when they discovered a video game being made in a Street Fighter motif, they came down hard on the programmers. The team, who call themselves Mane 6, never intended to see a profit from this, they simply wanted to do a cool game with the characters. Hasbro decided that a fighting game wasn’t in the spirit of their ponies (as opposed to clop fics, or disturbingly violent fan fics like Cupcakes) and issued a cease and desist, shutting down production of the game. 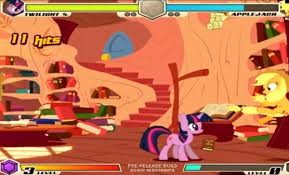 I managed to get a hold of an early release (fluttershy isn’t finished, and only the main six are in it) and tried it out.

It’s incredible. Yes, it’s a fighter, but the fighting is fairly non-violent, and absolutely in character. Pinkie Pie may whip out a pinkie cannon to blast you with pet alligators or presents. Twilight Sparkle telekineticly whips a book around at you and summons a spell from it to blast you with. The characters look exactly like they do on TV and the backgrounds look perfectly in place with Ponyville. My two

little girls absolutely LOVE it. They beg me to play it with them almost every day.

It’s a great gateway to gaming and to ponies. It’s quick and simple and I’m really disappointed they never got to finish it. I’m glad the development team has since gone on to bigger and better things, but still, a perfected version of Fighting is Magic would have been divine.

And of course, we play it on the Arcade machine – and that makes it the best thing ever.

I recently found this little app for my android tablet. I was looking for

something fun for my two little girls, and this was definitely a hit.

My Dragon is a little virtual pet, and a perfect fit for little princess loving girls. They love petting the dragon, and feeding it. As you go through the game, you teach it tricks like siting, come here and searching items for various characters. you can dress it and play with it.

extensive. Try it out from the Amazon app store, and don’t forget, new Violent Blue is up back at the main site!

A question has been occurring to me lately.

It first came to mind when Maddie and I were playing Gauntlet on the M.A.M.E. cabinet on night. Maddie frequently asks to play games with me on the rebuilt arcade machine, mostly the Marvel vs. DC M.U.G.E.N. game, but also things like Marble Madness or Crusin’. 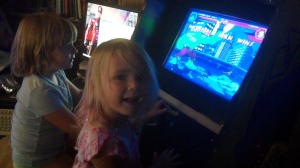 This night she had asked for a co-op game, especially one with a princess. Gauntlet seemed to be the best solution and we played through dozens of levels.

The next time the question came to mind was when I was playing a game of Heroclix over at Comics are Go! in Sheffield. I had brought out some of my custom objects to play with the game pieces – an old 7-Up machine, a cigarette vendor and an X-Men 4 player arcade cabinet. We were talking about how dumb it was that no one ever ported this game over to any

platform of the day or even to PC-CD (Though I’m told it’s finally available for ps3. Is that correct?) I mentioned that my daughter and I had played through the entire thing on my M.A.M.E cabinet.

So what’s the question? Here it is.

Are we the first generation of parents to use video games to bond with our kids?

It’s a devilishly simple question….and not as straightforward as it seems.

Sure parents probably played some video games with their kids, but how often? How did it fit into their 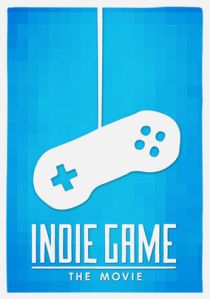 relationship? It’s still a reasonably new medium thought that’s getting easier and easier to forget. One of the developers in the documentary “Indie Game” pointed out that this generation – people born around/after 1975-1980 grew up with games as a normal part of their life. It wasn’t a novelty, it wasn’t an occasional activity, just popping a quarter in if you happened to be at the pizza parlor or something. We had Atari’s and Nintendos and probably played a little bit on most days.

When we first got an Atari 2600, my parents played a little bit with me, but the novelty soon wore off for them and they moved on. For the most part, I played games alone or occasionally with friends. I imagine that was the case with most kids. Some dads here and there would get addicted to Zelda or Mario and perhaps they would take turns, but those are really single player experiences, not bonding games. The documentary “The Ecstasy of Order” describes a

couple of families where they would competitively play Tetris, but again, one at a time, posting the score on a whiteboard or refrigerator.

Here’s the thing. I’m not a gamer. Not in the least. If you really stretch the definition, you might be able to label me as a retrogamer (one of the reasons I made Steve in Violent Blue one – at least that way I can know a little more about what I’m talking about). I enjoy classic games, and archive as many as I cam using emulators. I have a paticular love of old arcade games up through the 32-bit era. They tend to be short and the M.A.M.E.

cabinet gives me unlimited virtual quarters and that’s a good thing because more often than not, I don’t have the patience to finish a game. I complete a game on my PC or DS approximately once every year or two. The last one I did was the new version of Y’s ….and that doesn’t exactly count since it’s just a rehash of the game I beat on my Sega Master System twenty years ago. I’m pretty sure I will beat the Spirit Camera game Amy got me, but even that three hour game has stretched out for months!

When I was a teenager  I played every day, as an adult, I play games once a week or less…which brings me back to my point : NOT a gamer. 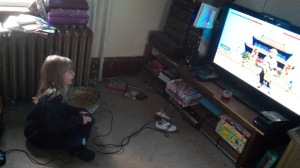 Having kids kind of changed that. I play more often now, because when they ask to play a game with me, I don’t want to say no. They won’t always be around to play games with me. When I built the M.A.M.E cabinet, I intentionally built in two controllers because I knew my kids would be playing games on it some day. Maddie and Lydia race against me in Mario Kart on our DS’s and pass around the tablet for the Hungry Shark game. We fight on Marvel vs. DC and on the old Capcom games, we co-op on Magic Sword. We play on the Genesis hooked up in the Livingroom (although those games actually don’t look that great on the HD TV) and Maddie has discovered she likes Scorpion best in Mortal Kombat.

Video games with Daddy has always been a part of their lives.

So I found the craziest app for my tablet and phone. It’s not exactly a video game, but that’s  the closest category I could really come up with to put it under.

Does anyone remember having one of those Tamagotchi devices back in the 90’s? You know, the little virtual pets in a LCD egg that you had to feed, clean up after and play with to keep them alive?

Chances are, if you were old enough to have one of  those games, you’ve grown up a bit now. According to the 2011-2012 APPA National Pet Owners Survey, 62% of U.S. households own a pet, which equates to 72.9 millions homes. Of course a real pet is more than a little different from having a virtual pet. That’s where today’s app comes in.

Pet Minder Lite for Android keeps track of all the needs your pet has. It’s a free app that tracks pet feedings, bathroom breaks and trips to the vet with a tile notification system that is very similar to Windows 8. It even remembers birthdays!  The app can show as many as to two feeding reminders every day on the Android notification bar.

wife adores bubble popping games, tetris clones and puzzles of all kinds. So when we found bubble Mania, we were both hooked.

It’s a standard puzzle game, match three or more of the same color and they all disappear. It’s wrapped up in the tiniest of stories, that the main character ( the cat like creature at the bottom) has had all of her babies kidnapped and they are trapped in the bubbles. It’s up to you to rescue them! So she stands under the mass of bubbles and throws them up one at a time, trying to match enough to free her babies.

You do have limited energy, lose to many times and you’ll have to wait until the next day to play again, but all in all

it’s a fun time waster, with pretty graphics that feel similar to the more kawaii Anime styles. Give it a try, it’s free at the Amazon App store, and while you’re waiting for it to download, head on over to Violent Blue and check out today’s strip!

This game has been out for a while, but  I really want to talk about it’s sequel, so that means I need to talk about this one first.

Stupid Zombies is more of a puzzle game than an action adventure, requiring you to figure out the angle and ricochet of your gunfire in order to clear a board of meandering zombies. As you go through the 240 levels, the puzzles get more complex. If you’re a fan of Angry Birds, then this is a game for you! Currently available for android and iPhone. It’s one of the few games I managed to finish, and never got bored of it.

And guess what? It just so happens there’s another one! But more on that later…