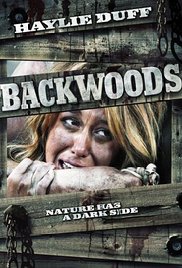 Reading the description or backwoods, it’s got me thinking this is probably going to be a knock off of “The Hills Have Eyes”. They waste no time getting into action with the generic couple abducted while on vacation. Unfortunately our backwards baddies don’t appear to be monsters, just a evil family.

I suspect I’m going to complain to the entire movie about them not being mutants.

Anyhow, a company sales team rents out the woods for a paintball match – one of those obnoxious team building exercises we occasionally hear about. The teams promptly get themselves raided and lost. While one team discovers the damage of the campsite, the other finds a derelict old house where they encounter our villainous backwoods family

Once everybody is captured, the real fight begins. There are elements of religious cult in here as well as some Saw influence. But it almost feels like they didn’t commit fully to Either. They really needed to choose one or the other – heighten the religious horror, heighten the hillbilly horror or focus on the torture. Still, the way they mash all of these elements together makes for a solid film, as long as it’s in a vacuum – that is, it’s good but only if you’ve never seen any other backwoods film. At the end of the day, there are way better options out there if you’re in the mood for hillbilly horror, but for a quick fix,  this’ll do just fine.