Last year around this time, I was off braving the frozen wastes of Chicago to head out and meet Clive Barker. I’d sent my buddy, director Mark MacKaye out to scope out the resurrection of the Dark X Mas convention. This year, I had an embargo against larger conventions like Days of the Dead I decided to head out to see Dark X Mas for myself. I’d actually quite enjoyed it’s summer counterpart Dark X Fest, but when I pulled up the map on my GPS I had to double check… The show had moved from the eerie hotel in the middle of nowhere, set against barren fields full of ghostly children. This time around, GPS was taking me to Mentor, and a familiar address at that. Dark X Mas has moved to the Holiday Inn that has hosted Lake Effect Comicon for the last few years. It’s familiar digs, despite being configured a little differently.

Once inside, I made a beeline for Marc Price’s table. Price is best known as Michael J. Fox’s best friend Skippy on Family Ties, but Dark X Mas had him here to celebrate the film Trick or Treat, where he co-starred with Ozzy Osbourne and Gene Simmons.That’s not why I wanted to meet him. I sidled up to his table and pulled out my convention bag.He spied the Troma autograph on it, and pointed excitedly.

“Lloyd Kauffman!, I know that name!” Price exclaimed with a huge grin. He turned and pointed to a particular poster on his banner. “He actually just bought up the rights to all the killer tomatoes movies!”
Out of my bag I pulled the same DVD cover and presented him with Killer Tomatoes Eat France.

“Like this?” I replied smiling. I reached into my bag again.

“I also brought you a friend to meet you.” and with those words I pulled out a plush fuzzy tomato. He picked up FT In wonderment, turning him over and over looking for a tag. I informed him that these were handmade, a little something I’ve been putting together since watching the films recently. He shook his head in astonishment

“Seriously? I thought it was official merch!” I commiserated with him that there was no official merchandise for Killer Tomatoes, and even when the cartoon had been on there was very little. Price was excited to talk about the movie, and shocked that anyone had even seen it much less enjoyed it. He taken the role against the wishes of his agent, who was sure it would be a disaster. Price on the other hand didn’t want to pass up the opportunity to travel to Paris on the film’s dime. He still finds it mildly annoying that like trick-or-treat, he’s not on the cover of the movie – but he remembers all the lines and

even knows about some of the other sequels, informing me that George Clooney is in one of them – “the second!” I exclaimed happily.

I pulled out my other killer tomatoes, Zoltan and Fang, and we grabbed a passer-by to take a photo of us with the tomatoes. Price pointed it to them and ask the cameraman do you know what these are?” The guy with the camera grinned and bobbed his head referencing “Part four of the tomatoes trilogy!” Price was flabbergasted that he had another person was familiar with this movie.

He wouldn’t take any money for signing my DVD cover but was selling autographed photos from Trick or Treat and Family Ties with all proceeds going to the Michael J Fox foundation. I cheerfully grabbed a Trick or Treat photo and got a second autograph so I could make a donation. We shook hands but I wasn’t done with Skippy yet!

I moved down to the next table where Angela Jones was sitting. She is probably most notable for a small role that she had in Pulp Fiction, driving taxi for Bruce Willis and chatting about what it feels like to kill a person. It’s a bit role, sure, but it’s a bit role in Pulp Fiction! She was nice enough to sign my VHS box and when it came time to take a photo, there was no one around. She grabbed my phone and waved Price over, asking if he could take the photo for us. This is not something I don’t normally do, asking one of the guests to do grunt work like taking photos seems a little gauche, but she was the one doing the asking. Marc framed us in the picture, then shook his head, unsatisfied with the angle. He moved to the left a little bit… Looked again and shut the shoulders and moved a little bit more to the left. Just a little bit more, and finally found the perfect

angle and proceeded to take a photograph of the back of my head. “What are you DOING???” Angela chided Marc as we all laughed together. It was great fun and exactly the kind of goofy stuff you want to see at one of these events.

Shawn South was the last person I was there to meet, he’s been a bit player on a variety of productions, but I was interested in getting him on my Walking Dead poster. They had him seated next to Tim Proctor, another Walking Dead alumni, and he was every bit as friendly and fun as Proctor has been in the past. I caught him well he was chatting up a couple people who had brought him record albums to sign. He told them the story of how Norman Reedus didn’t believe Shawn South was his real name.

“That’s got to be a stage name! Show me your license!” Norman had teased him until he whipped out his driver’s license to prove it. Norman would continue to tease him through production – Shawn SOUTH!” enlisting other cast to run the gag. He recalled one time he had seen Andrew Lincoln pulling out of the parking lot and waved to him “Shawn SOUTH!!!”

wife would watch with me. I told him the story about me catching up the first few seasons when they were marathoning it before starting the series in earnest. It had just always been on and Amy had wandered by enough that she started to get invested, and now it’s more her show than mine.

“Man, I know exactly what you mean,” South replied. “There’s so many shows I watch just so I can hang out with my wife. I mean stuff I’d NEVER have watched on my own. There’s this one Netflix show, it’s from Canada – it’s called Heartland….” My jaw dropped.

“I know Heartland.” I said, trying to control my laughter. “My wife is OBSESSED with it!”

We chatted for a while about the series and out mutual amazement at how it’s lasted 13 years. Then South paused and looked around the ghoulish wares surrounding us and shook his head.

“This is the last place I thought I’d be talking with someone about Heartland!”

Because this was a little smaller of a show I decide it would be a nice place to to a soft premier of my new Skeksis costume from The Dark Crystal. I’d been tinkering with it for a few months and Dark X Mas gave me a deadline to finish the main body (though I’ll still be working on accessories over the winter). I lugged the large costume over to an empty space across from the registration table. The wristbands for the show had been red, which would blend in nicely with my robes, but that also may present a problem getting in and out. So I walked over to the lady at the registration table and presented my band and explained that it may be obscured soon. She chuckled and nodded, then proceed to watch in fascination as I suited up. Tim Proctor from the Walking Dead stopped dead in his tracks

as he was passing by.

“I saw all the red and gold and the PVC pipes and though they were putting up a tree r something!” He said as he gawked at the bird-like monster. “This is totally not what I expected!”

I wandered in, stopping for photos with people and I heard a voice nearby warn “You better watch out! Thanksgiving is days away!”. Inside I found monsters to play with. Guests Chris Hahn and Marc Price both jumped in for photos with the skeksis as well as several of the Horror Hosts. One group of horror hosts interviewed me asking “If you can’t find any gelflings to eat then what do you do? Is there like a generic version?”

“Lawn Gnomes.” I replied. then headed over to take a picture with Sally from The Nightmare Before Christmas. Anne Robinson from the original War of the Worlds saw me and gushed.

“I have no idea what you are, but it’s amazing!” She cackled. “Look at the armature on the hands! The fingers even move!”

I had to run outside to grab something from my car. On the way out the gentleman from the Horror Hotel convention stopped me to tell me about thier show. “If you want to come out this year, you’ve got a ticket. I’d bet with all the indie filmmakers there, someone

might even want to use that suit in a production!” I thanked him and let him know that Horror Hotel is one of those shows that’s been on my radar, but always seemed to conflict with someone else, but that I’d try to make it next year. I unintentionally freaked out some people trying to park in the hotel lot and retrieved my phone from the car, while sneaking some hydration. On the way back in I ran into Lisa Wilcox (from Nightmare on Elm Street 4&5) taking a smoke break and assured her I’d be in for her panel soon. She grinned. I’d see a dark elf out there later – not quite a gelfling, but close enough!

I do love hitting panels at these events. I managed to sit through Angela Jones talk as well as the Walking Dead panel in my street clothes, but had to sneak in the back for Marc Price and Lisa Wilcox due to the bulky costume. Tim Proctor and Shawn SOUTH moderated thier own panel, just having a talk between themselves and the audience, but apparently no one had been scheduled to do Jones or Wilcox. Joe Ostrica from Retro Invasion Weekend jumped in to save the day acting as impromptu moderator and asking excellent questions on the fly. Much respect to him for doing that.

If I have a complaint about Dark X Mas it’s the lack of organization. Not having moderators and kind of failing t keep the panels on time or on track shows a lack of planning and foresight. The panels kind of just lasted as long as they lasted. Maybe an hour for one. Maybe twenty minuets for another (and they NEED strong programming with the dealers room being on the small side). They advertised a costume contest, but no one knew where they were going to hold it or even who the judges would be. At the last moment they decided to hold it near the entrance of the dealers room and asked the horrors hosts to judge. In the future, I’d like to see a bit more planning, but I DO see a future for this show. It’s a friendly show with a fun atmosphere and I honestly had a better time here than I did at Days of the Dead last year. I’m definitely coming back to Dark X Mas in 2020. 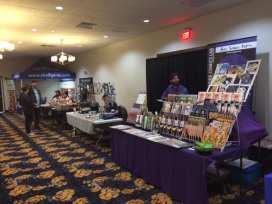 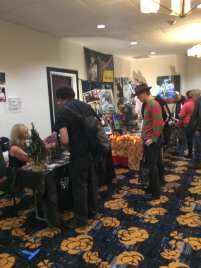 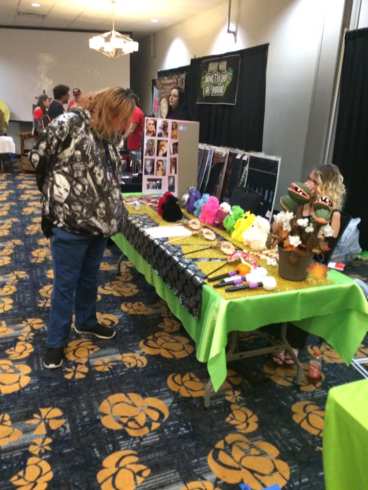 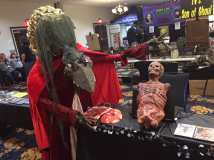 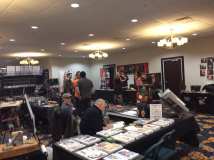 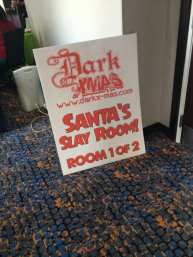 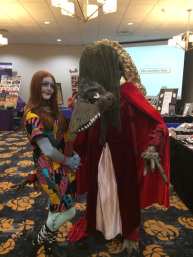 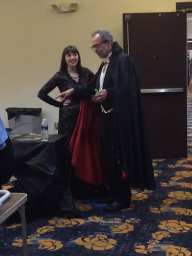 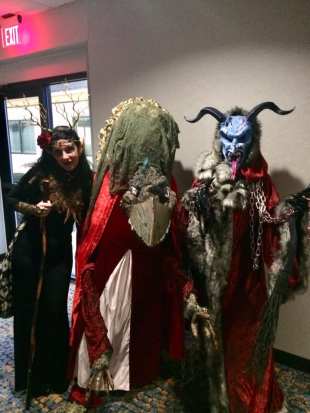 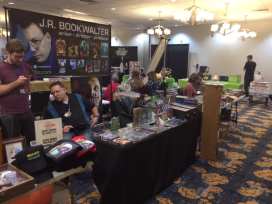