Right off the bat, let’s get something straight – The Predator is not a remake. It’s not a re-imagining, It’s really only a reboot in that they are hoping to reignite the franchise with this movie. This is a sequel, and a proper one at that… there were references to previous films, and we definitely know where this movie stands in the continuity. We get homages although they’re not beating you over the head with them and yes somebody does utter the words “Get to the choppas!”

But it’s definitely a sequel another remake.They get points for that. Then they lose those points for casting Olivia Munn as a scientist.

They get docked couple more for Jake Busey the same role. Seriously, while Brent Spiner could pull off the slightly cracked scientist in government isolation, Busey just doesn’t have the chops for it. He’s too goofy in a Shaggy and Scooby kind of way.

Then there is Olivia Munn. Munn doesn’t smile once in this entire film, and she doesn’t know how to run – heroically or otherwise (don’t they have some sort of superhero school training in the X-Men films?). Seriously, those dainty little steps she’s taking are doing nothing for her performance. She spends the entire film with a shocked and confused look on her face – I can’t blame her for that one though, because I’m pretty confused as to why she was cast here. She lacks their gravitas for this sort of role, I just don’t buy her as an intellectual (was Kate McKinnon not available?) Moreover, she just isn’t an action hero. Yet they’re not exploiting her looks with a clingy T-shirt or something equally crass, so quite frankly I don’t understand what she’s doing here. 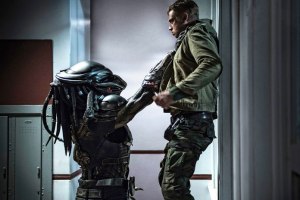 It’s not a bad film though – Boyd Holbrook does his best as the hero of the piece. Arnold has big shoes to fill, and they’re doing their best. I’m actually quite surprised at how much I enjoy Keegan Michael Key in this as well. His comic relief could very easily tip over into the annoying – and I’m betting a lot of people are still going to call it that- but I actually found him funny and doing some of his better work here. I wasn’t alone either, I could frequently hear laughter in the theater I was at whenever he’d be delivering outrageously offensive humor at the worst possible times.

The Predator wants to be Independence Day without the buildings exploding. It wants that sort of underground government investigation and involvement attempting as it does, a great scope in its storytelling. It’s particularly apparent in the first act. Things narrow down and get personal on the second act as our hero’s autistic son gets involved in the danger, and then we’re back to the big picture by the third act with the government tracking down the monster. I get the impression that there may have been a bigger story originally, and that it was cut down in certain places (more likely for pace rather than cost. This movie looks expensive). Indeed, I’m not sure if that was to the films benefit or detriment.

Gore hounds will be happy, this is easily the most violent predator film I’ve ever seen – and let’s face it, this franchise set the bar pretty high. Still, it’s usually stabbing or  lasers through the chest in these movies. With this installment we get tons of severed bodies, blood and organs flying all over the place – and far more intestines than I’m used to seeing, even with my film watching habits. I’m digging the way they push the mythology as well. We get a little bit more insight as to why the Predators take the sort of trophies they do, and when the Predator brings out his hunting dogs, it’s actually a great moment. The creature designs are beautiful and they’re a perfectly fitting addition to the predator mythos. It’s a shame they have to be completely CGI, 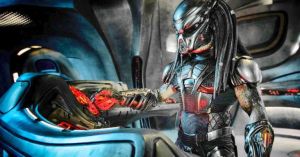 because they do have that FX fake sheen sometimes. Indeed, the ships here have the same problem, though this film probably gives us the best look at the Predator vessels that we’ve ever seen. Someone to put some thought into this, both with the shapes that they have integrated into the hull as well as the brushed metal coloring that shows up all over them.

Overall, it’s a solid film – and if it were the first movie in the franchise, I think would be guaranteed a sequel. Because it’s part of a legacy series, it’s judged a lot more harshly,  but it’s definitely a Predator film rather than a derivative knock off. In fact it’s definitely the sort of film that couldn’t be anything else, and I’m looking forward to any follow-ups Fox has in store for us.

The Predator opens in Theaters September 14.